When you need tools or parts for something you’re working on around the house, you head to the nearest hardware store. Space travelers don’t have that luxury and may have to make their own tools and parts on long duration missions like the journey to Mars. Scientists and engineers at NASA’s Marshall Space Flight Center in Huntsville, Alabama, are using data from International Space Station experiments to study liquids that may be used to help make valuable tools when exploring deep space.

For a decade, the Materials International Space Station Experiments (MISSE) were attached to the outside of the space station, where more than 4,000 materials were exposed to the harsh space environment. This included a special class of liquids, called ionic liquids, and a novel epoxy that scientists are studying to learn how these liquids tolerate the environment outside the orbiting laboratory. The members of this family of fluids have low melting points, and are not as flammable as many conventional chemicals. They also have extremely low vapor pressures, meaning they don’t easily evaporate and are easier to retain in the vacuum of space. 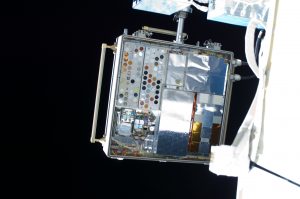 Experiment sample trays on MISSE-8 attached to the exterior of the International Space Station in 2013. These trays held the ionic liquid epoxy samples that could help build composite cryogenic tanks for future spacecraft. / NASA

“Because of their unique chemistry, we can use ionic liquids to extract both metals and oxygen from lunar or Martian soil at about the same temperature you’d bake a cake,” said Laurel Karr, a materials scientist at the Marshall Center. “The metals could then be used in a 3D printer for needed parts, and the oxygen could be used for life support or propulsion.”

Ionic liquids could be used as chemical drills to dissolve regolith on the surface of Mars, said Karr, thus extending the life of drill bits that future explorers, both human and robotic, would normally use to probe the Martian surface.

“We drill into the surface of a planet or asteroid to acquire samples for geological investigations,” said Karr. “With this fluid, we could bring up samples in a liquid form for chemical analyses right there on the drill site.”

A composite overwrap pressure vessel made with ionic liquid-based epoxy and commercial carbon fibers like this one will soon begin cryogenic and pressure testing at NASA’s Marshall Space Flight Center in Huntsville, Alabama. / NASA

NASA is interested in these ionic liquids not only for their many uses for exploration missions, but also because they are environmentally-friendly chemicals. Metal extraction technology using the liquid could remove precious metals from ore without the environmental impact of some current methods used on Earth. For example, nickel is conventionally processed by smelting the material at 1,350 degrees Celsius and using sulfuric acid, which is impractical in an enclosed spacecraft due to the toxicity of the acid. Ionic liquid can remove nickel from a meteorite under 200 degrees Celsius.

Scientists are also testing ionic liquids as part of a life support method in space by extracting carbon dioxide from the air and breaking it down to create oxygen for breathing and methane for propulsion.

Many of the ionic liquids can even be filtered and recreated using electrolysis and hydrogen, making them useful recyclable materials in space and on Earth.

One type of ionic liquids that are of particular interest are epoxies. Richard Grugel, a materials scientist at Marshall, and his colleagues have been systematically studying epoxies made from ionic liquids, finding them to be very strong, able to bind well with carbon fiber and resist the extreme temperature of cryogenic liquid oxygen and hydrogen.

In 2013, two different ionic liquid-based epoxies were flown on MISSE-8. After two years of exposure to the space environment, the epoxies were recovered and returned to Earth on a SpaceX Dragon spacecraft. Examination of the liquid samples showed some darkening due to solar ultraviolet radiation, but no cracking or de-bonding, and no change in weight or adhesion.

“These attributes suggest the epoxies could be used to make carbon-fiber composite tanks for cryogenic liquid storage,” said Grugel. “This can provide a significant weight reduction over aluminum ones currently used to launch spacecraft.”

Microcracking can lead to leaking, and has been a challenge with early composite cryogenic tank designs. Testing is underway at Marshall on composite overwrap pressure vessels — small metal tanks wrapped with commercial carbon fiber using ionic liquid epoxy — to determine if the ionic liquid is a viable material to construct these tanks and make them stronger.

“Studies are showing this family of versatile liquids could not only be used to build and repair the spacecraft to get us to Mars, but also help us survive and make new discoveries after we arrive,” said Grugel.

As MISSE demonstrates, science takes time, and research results often keep paying off decades after experiment samples are returned to Earth. The MISSE project has made it possible to evaluate the performance, stability and long-term survivability of materials and components used by NASA, commercial companies and the U.S. Department of Defense. Many spacecraft safely operating today have MISSE to thank for successful operations, because they are made of the most suitable materials for the space environment. The first Martian explorers may have MISSE to thank for innovative materials and processes that help them survive on the red planet.

Laurel Karr and Richard Grugel, two materials scientists at NASA’s Marshall Space Flight Center talk about the Materials on the International Space Station Experiment during a recent episode of Space Station Live on NASA-TV. The investigation is shedding light on ionic liquids, which may prove to be a valuable tool when it comes to designing tanks for spacecraft or extracting oxygen and other elements from the Martian soil. It’s a special class of liquids that are also environmentally friendly.