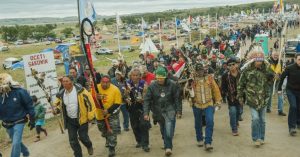 “Let’s stop this savage injustice being committed right here at home. If not us, who? If not now, when?”

Over 1,000 U.S. military veterans are planning to “deploy” to join the Standing Rock Sioux Tribe and peacefully support the water protectors’ fight against the controversial Dakota Access Pipeline near Cannon Ball, North Dakota.

“We are calling for our fellow veterans to assemble as a peaceful, unarmed militia at the Standing Rock Indian Reservation on Dec 4-7 and defend the water protectors from assault and intimidation at the hands of the militarized police force and DAPL security,” the organizers wrote on the group’s GoFundMe page.

“Come to Standing Rock Indian Reservation and hold the line with Wes Clark Jr., Michael Wood Jr., [Hawaii Democratic Rep.] Tulsi Gabbard, and hundreds of other veterans in support of the Sioux nation against the DAPL pipeline,” reads the description of the action on Facebook.

The event, Veterans Stand for Standing Rock, was put together by “veterans of the United States Armed Forces, including the U.S. Army, United States Marine Corps, U.S. Navy, U.S. Air Force, and U.S. Coast Guard,” according to the group’s fundraiser.

The call to action has already garnered nearly $200,000 in donations, which will to go toward funding veterans’ travel to North Dakota and legal fees they are likely to incur.

Clark Jr. and Wood Jr., the two primary organizers of the campaign, spoke to their passion for the water protectors’ cause and their commitment to nonviolence when they were profiled earlier this week in the veterans’ publication Task & Purpose:

“This country is repressing our people,” Wood Jr. says. “If we’re going to be heroes, if we’re really going to be those veterans that this country praises, well, then we need to do the things that we actually said we’re going to do when we took the oath to defend the Constitution from enemies foreign and domestic.”

“According to an ‘operations order’ for the planned engagement, posted to social media in mid-November, ‘First Americans have served in the United States Military, defending the soil of our homelands, at a greater percentage than any other group of Americans. There is no other people more deserving of veteran support,'” Task & Purpose writes.

The veterans are prepared for the police violence that they may encounter: “Bring [b]ody armor, gas masks, earplugs, AND shooting mufflers (we may be facing a sound cannon) but no drugs, alcohol, or weapons,” the organizers told the volunteers.

Task & Purpose delved into all the details of the veterans’ plan, which is intended both to bolster the peaceful water protectors’ fight as well as to draw media attention to the ongoing protest:

On Dec. 4, Clark Jr. and Wood Jr., along with a group of veterans and other folks in the “bravery business,” as Wood Jr. puts it […] will muster at Standing Rock. The following morning they will join members of the Standing Rock Sioux tribe, including Young, for a traditional healing ceremony. With an eye toward the media, old military uniforms will be donned so that if the veterans are brutalized by the police, they are brutalized not as ordinary citizens, but as people who once served the government they are protesting against. Then body armor, ear plugs, and gas masks will be issued to those who didn’t bring their own. Bagpipes will play, and traditional Sioux war songs will be sung. The music will continue as everyone marches together to the banks of the Missouri, on the other side of which a line of guards in riot gear will be standing ready with rifles, mace, batons, and dogs. Then, the veterans and their allies—or at least the ones who are brave enough—will lock arms and cross the river in a “massive line” for their “first encounter” with the “opposing forces.” The goal is to make it to the drilling pad and surround it, arm in arm. That will require making it through the line of guards, who have repelled other such attempts with a level of physical force Sioux tribal members and protesters have described as “excessive”—claims that recently prompted a United Nations investigation. Of course, that’s what the body armor and gas masks are for.

“We’ll have those people who will recognize that they’re not willing to take a bullet, and those who recognize that they are,” Wood Jr. told Task & Purpose. “It’s okay if some of them step back, but Wes and I have no intention of doing so.”