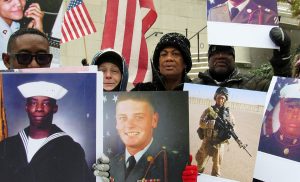 A large number of vets were hurt when the Oreo cookie plant pulled out of Chicago. Workers demonstrated the day before Veterans Day. | Al Neal, Roberta Wood/PW

America’s millions of veterans—who make up 1 percent of this country’s population—will lose out big time from the Republican tax bill, said Tefere Gebre, executive vice president of the AFL-CIO.

“The nation’s veterans are the 1 percent who sacrifice for their country,” said Gebre. But it will be an entirely different 1 percent—the wealthiest Americans—who rake in the rewards from this “screwed up” tax plan,” he declared at a rally held in out front of the Vietnam Veterans’ memorial park on a snowy Friday here just a day before Veterans Day.

Out-of-work veterans gathered to protest the Nabisco/Mondelez maneuver last year to export production of its iconic Oreo brand to Mexico. The Bakery, Confectionery, Tobacco Workers and Grain Millers Union said out of the hundreds of jobs lost, a large percent were veterans.

The Republican tax bill actually rewards such outsourcing of American jobs, Gebre told People’s World. It gives an incentive to companies like Nabisco/Mondelez that ship jobs overseas. It will allow them to bring back the profits they’ve stashed away from this outsourcing virtually tax free. 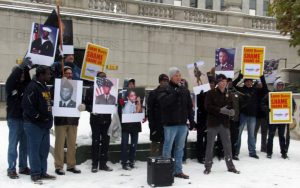 “There is nothing more important than the dignity of work for our veterans,” said Gebre.

Since his election to the AFL-CIO’s leadership in 2013, Gebre has emerged as a fervent and tireless advocate for the American working class.

The 49-year-old immigrant from Ethiopia related that he had chosen to come to this country because it was known as the “the land of the free and the home of the brave,” but that neither the Republican tax plan nor the actions of corporations like Nabisco/Mondelez reflect these values.

Republican supporters of the tax plan now before Congress claim that “repatriating” profits will free up money for  corporations to create jobs in the US. Gebre countered indignantly: “Capital is not people! Repatriating of capital does not bring work back. Corporations in this country are already awash in money and they still are not creating jobs in this country. Instead they are looking for the cheapest and most exploitable workers around the world.”

Putting himself in the position of a U.S. company, Gebre explained, “If my competitors are exporting their jobs and getting a tax incentive to do that while I’m employing U.S. workers and not getting a tax cut for paying good, family sustaining-wages, where is the incentive to create jobs for American workers?”

Gebre emphasized that he does not see the question as one of American workers versus Mexican workers. “We are not saying we shouldn’t be creating jobs overseas. We’re saying—here or overseas—whatever job is being created has to be dignifying work, that is, family-sustaining jobs, that lift all of us up together not pull us all down to the dirt.”

Anthony Thomas, a machine operator on the Oreo line, told People’s World that he was making $26 an hour when he was laid off last year. The Mexican worker who now operates the same machine Thomas did, mixing the gooey filling that has delighted generations of Oreo fans, is making only $1 per hour, according to Thomas’ union.

At the rally, Gebre brought the tax issue back to the veterans: “Brothers and sisters, as we are speaking here today,  the powers-that-be are trying to reward the wealthiest one percent, not the one percent who fought for this country—this is not a tax reform bill, it is a ‘stealing money from working people bill,’” he declared.