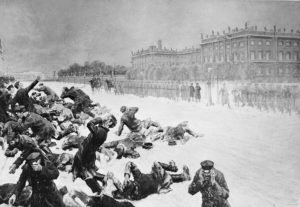 Artistic impression of Bloody Sunday in St. Petersburg, Russia, when unarmed demonstrators marching to present a petition to Tsar Nicholas II were shot at by the Imperial Guard in front of the Winter Palace on 22 January 1905. / Imperial War Museum, Wikimedia Commons

Looking at the ideologies of violence and violent practices driving the Russian Revolution and the civil war.

Revolution. The word conjures up an image of sudden and forceful change – tearing a society from one path of development into another. The sheer scale of the death and destruction associated with the Russian Revolution is almost unparalleled in modern history, with millions killed by war, terror, hunger, and disease within a very short space of time.

Violence before the Russian Revolution

Violence was rife in Russia even before the First World War and two revolutions of 1917, with international war (Russo-Japanese War (1904–05)), insurrection during the revolution of 1905, state repression and anti-Semitism.

In addition, Russian progressives saw Tsarist society as resting on a bedrock of violence due to its exclusion of most of its population (such as the lower classes and non-Russian nations) from the political process.

In reaction to this, in the 19th and early 20th centuries, underground cells of conspiratorial intellectuals and revolutionary martyrs assassinated thousands of figures associated with the state, including Tsar Alexander II himself in 1881. Such terrorism was effectively ‘propaganda of the deed’, aspiring to rouse the people against the government by example.

As well as the isolated acts of conspirators, pre-war Russian society also saw different types of collective violence, including working-class violence linked to strikes and other forms of labour unrest. The Russian Empire also became known for its ‘pogroms’: waves of anti-Jewish rioting which killed tens of thousands and sent millions of Russian Jews into exile.

An iconic moment of Tsarist state violence occurred on 22 January (Old Style: 9th January) 1905, known as ‘Bloody Sunday’, when government forces fired upon a demonstration which had been petitioning peacefully for political and social rights. The ‘1905 revolution’ which followed has often been described as a predecessor to, or in Lenin’s words, a ‘dress-rehearsal’ for, the larger and more explosive 1917 revolutions.

After initially quelling this unrest with concessions and reforms, the Russian state made sweeping use of martial law and extraordinary measures – their arbitrary use of power creating an atmosphere of oppression. 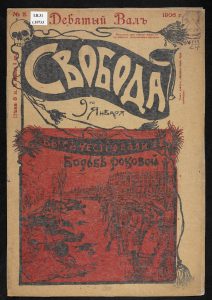 Many historians have stressed the radicalising role of the First World War on this pre-existing violence. As a ‘total’ war fought with modern industrial methods, the First World War drew civilian populations into the conflict, helping to normalise violence and suffering. The war tested the European states to their limits and ultimately, in the defeated nations, brought their entire social systems into crisis.

The breakup of the Russian state throughout 1917 left a void of authority which many parties and organisations struggled to fill – the externalised violence of the war was redirected internally, and intensified.

The Empire Dissolves: Why did the Revolution Descend into Violence?

The February Revolution which deposed the Tsar is often depicted as relatively bloodless, but in fact its casualties were far greater than those of the more famous October Revolution which brought the Bolsheviks to power. On the first days of the revolution in Petrograd, hundreds of marchers were shot by troops defending the old order, and in the chaos, around 1,400 people are thought to have been killed.

Among the high ideals of the Revolution, however, was the creation of a more humane society. The Provisional Government quickly abolished the death penalty and granted Russian citizens important new civil rights. Even so, its fortunes would largely be defined by their continued commitment to fighting the war to the finish.

The Provisional Government struggled to deal with the violent forces unleashed by the fall of the autocracy, including factory occupations, mutinies among the armed forces, and violence perpetrated as peasants seized land for themselves away from the landlords.

On top of all this, Russia’s position in the war was deteriorating. After the disastrous June Offensive – where the then-Minister of War, Alexander Kerensky unsuccessfully tried to restore the Russian army’s will to fight – mutinies and desertions from the army grew. Many peasant-soldiers preferred to return to their home villages and take part in the expropriations of land rather than continue to fight in the war, fearing that they would lose out if they stayed on the front lines while land was being redistributed back home.

As the Provisional Government lost its grip on the country, it found itself forced to revive the old violent methods of keeping order, including the reinstatement of the death penalty; in July 1917, it violently repressed a large demonstration of soldiers, sailors and workers. It was in the context of disintegrating state power, various forms of unrest across the country and rising dissatisfaction with the continuing slaughter in the war that the far-left Bolshevik Party gained influence.

So when the Bolsheviks organised their Red Guards to storm the Winter Palace on 7 November (Old Style: 25th October) 1917, there were very few willing to defend it.

Lenin, the leader of the Bolsheviks, wanted to end the war, but not for reasons of pacifism. He believed that violence would continue as long as society was divided into fundamentally opposed social classes, inevitably leading to social conflict, and as long as capitalist governments required imperialism to maintain themselves, inevitably provoking wars between nations.

Class war, Lenin argued, was ‘of all the wars known in history… the only lawful, rightful, just and truly great war’. He hoped to transform the First World War from a conflict between nations into a European-wide civil war between classes – between, in his view, the working-class and those who exploited them. The struggle against counter-revolutionary forces was depicted in the terms of a ‘just war’, as shown in this poster. 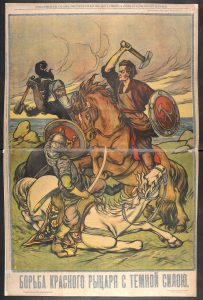 The Fight of the Red Knight with the Dark Force (1919): A poster depicting a revolutionary Red Knight battling against the ‘dark force’ of counter-revolution / British Library, Public Domain

To win this class war, the Bolsheviks thought it would be necessary to replace the various capitalist states with a working-class dictatorship able to suppress by force any attempts at counter-revolution. More cynical minds suggest that the Bolsheviks were merely aspiring for a dictatorship of their party, regardless of the working-class and peasantry. After the October Revolution – in the context of a developing series of civil conflicts between the nations, religions, regions, classes and political groups of the disintegrating Russian Empire – they began to build this dictatorship.

How did civil conflict intensify in Russia?

The Bolshevik seizure of power began a new stage in the escalating cycle of violence. The different and opposing political groups governed their territories under the pressure of a constant state of emergency. The civil wars that followed the October Revolution were bitter and marked by terrible atrocities perpetrated by army units and partisans of all sides, as the distinction between combatant and civilian was blurred. Each side attempted to depict the other as the main perpetrator of violence against non-combatants, as in this Red propaganda poster showing the White forces burning crops and terrorising villagers. 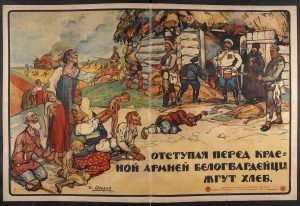 For many of the intellectual participants of the Russian Revolution, the French Revolution of 1789 provided a crucial historical model, and they studied its history to try and work out where their own revolution would lead.

Many Bolsheviks were primed by their identification with the most extreme French revolutionaries, the Jacobins, to expect a period known as the Reign of Terror to be a necessary stage for the revolution to maintain itself. Meanwhile, the counter-revolutionary period known as White Terror, which followed the fall of the Jacobins in the French Revolution, was both feared on the Left and desired on the Right.

The Bolsheviks immediately began to create a system of institutions to secure their dictatorship against threats of counter-revolution, internal crisis and external invasion, especially after the dissolution of the Constituent Assembly and in the context of growing unrest after signing the Treaty of Brest-Litovsk.

In January 1918, the Red Army was founded, building on the less organised Red Guard militias. It was tasked both with defending the Soviet state militarily against internal and external enemies, and, it was hoped, to support the revolutionaries of the rest of Europe.

In addition, the notorious Cheka was founded at the end of 1917 as a small security force tasked with combating counter-revolution and sabotage, and grew over the course of 1918 into a feared apparatus of repression. Certain nationalist anti-Bolshevik propaganda presented the Cheka as a tool of Jews utilising Chinese death squads against patriotic ethnic Russians, stoking racial violence, as shown in this famous anti-Semitic caricature of Trotsky. 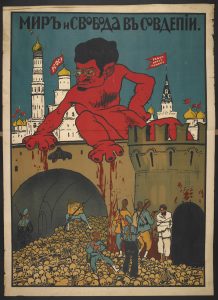 Growing conditions of food scarcity, drastically worsening over the course of the First World War and Russia’s civil war, drove further conflict. In the countryside, the Bolsheviks’ struggle to establish a dictatorship over food supply to ease the hunger in the cities created an atmosphere of social war of the cities against the countryside, and especially against the well-off peasantry who were accused of hoarding grain. The policy of taking ‘surplus’ grain by force, driven by desperate conditions of famine (and, in turn, exacerbating such conditions), was often accompanied by terrible atrocities. Depicting a common scene, this White propaganda poster portrays the Bolsheviks looting and sacking a Cossack village. 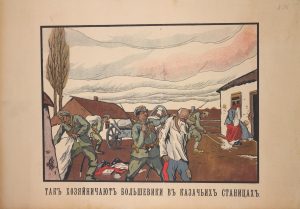 Red and White Terror grew as deliberate policy from above interacted with collective action from below, while class conflict was exasperated by local factors such as food scarcity, rivalry between ethnicities, nations and regions, and opportunistic banditry.

There was also much violence perpetrated by other groups than the Reds or Whites amid this chaos. This included the loose and localised groups known as the Green armies chiefly associated with the peasantry, the different national armies of the former Tsarist Empire, the anarchist Black army led by Nestor Makhno in Ukraine, and international intervention forces.

How did the violence of the Russian civil war shape the Soviet state?

The Soviet state developed by the Bolsheviks and consolidated in the early 1920s was clearly shaped by the brutalising experiences of the First World War and the civil war.

Throughout the civil war, the Bolshevik state firmly asserted its right to the monopoly of violence in the territory it controlled, attempting to create order out of the economic dislocation, shortages and desperate anarchy of the situation. This propaganda poster from the early 1920s celebrates the firm actions of the Bolsheviks as ‘sweeping the criminals out of the Soviet land’. 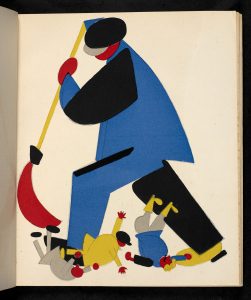 A Worker Sweeping the Criminals out of the Soviet Land poster, 1923: A Soviet poster showing a worker clearing the land of criminals / British Library, Public Domain

During the consolidation of the Soviet state in the final period of the civil war, any resistance was harshly punished. This included the violent suppression of an anti-Bolshevik uprising in Kronstadt in 1921, led by revolutionaries who wanted ‘Soviets without Communists’.

Peasant revolts against the Bolsheviks were ruthlessly dealt with, such as in the Tambov rebellion of 1920–21, when the use of concentration camps and poison gas led to hundreds of thousands of peasants being killed.

Under the pressure of these uprisings and disasters, the Bolshevik leaders soon changed their approach, and criticised their own excesses during the period they now defined as ‘war communism’. As threats to Bolshevik control diminished, they shifted away from these emergency measures without relinquishing their party dictatorship or the system of repression they had developed.

The civil war period produced the state apparatus which Joseph Stalin would later use to accomplish his campaigns of brutality, which killed many millions in the effort to rapidly create a modern industrial nation out of a backward agricultural society.

Arno J. Mayer, The Furies: Violence and Terror in the French and Russian Revolutions (New Jersey, 2000).

James Ryan, ‘The Sacralization of Violence: Bolshevik Justifications for Violence and Terror during the Civil War’, Slavic Review 74, 4 (Winter, 2015), 808–31.