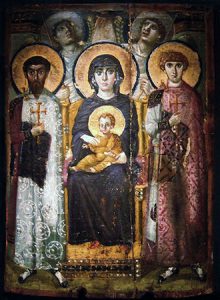 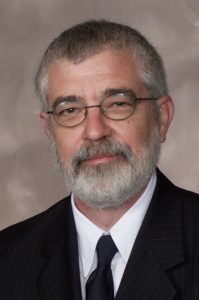 One of thousands of important Byzantine images, books, and documents preserved at St. Catherine’s Monastery, Mount Sinai (Egypt) is the remarkable encaustic icon painting of the Virgin (Theotokos) and Child between Saints Theodore and George (“Icon” is Greek for “image” or “painting” and encaustic is a painting technique that uses wax as a medium to carry the color).

The icon shows the Virgin and Child flanked by two soldier saints, St. Theodore to the left and St. George at the right. Above these are two angels who gaze upward to the hand of God, from which light emanates, falling on the Virgin.

The painter selectively used the classicizing style inherited from Rome. The faces are modeled; we see the same convincing modeling in the heads of the angels (note the muscles of the necks) and the ease with which the heads turn almost three-quarters.

The space appears compressed, almost flat, at our first encounter. Yet we find spatial recession, first in the throne of the Virgin where we glimpse part of the right side and a shadow cast by the throne; we also see a receding armrest as well as a projecting footrest. The Virgin, with a slight twist of her body, sits comfortably on the throne, leaning her body left toward the edge of the throne. The child sits on her ample lap as the mother supports him with both hands. We see the left knee of the Virgin beneath convincing drapery whose folds fall between her legs.

At the top of the painting an architectural member turns and recedes at the heads of the angels. The architecture helps to create and close off the space around the holy scene.

New in our icon is what we might call a “hierarchy of bodies.” Theodore and George stand erect, feet on the ground, and gaze directly at the viewer with large, passive eyes. While looking at us they show no recognition of the viewer and appear ready to receive something from us. The saints are slightly animated by the lifting of a heel by each as though they slowly step toward us. 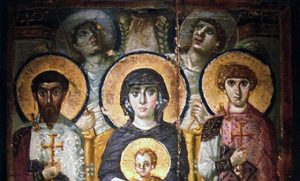 The Virgin averts her gaze and does not make eye contact with the viewer. The ethereal angels concentrate on the hand above. The light tones of the angels and especially the slightly transparent rendering of their halos give the two an otherworldly appearance.

Visual movement upward, toward the hand of God

This supremely composed picture gives us an unmistakable sense of visual movement inward and upward, from the saints to the Virgin and from the Virgin upward past the angels to the hand of God.

The passive saints seem to stand ready to receive the veneration of the viewer and pass it inward and upward until it reaches the most sacred realm depicted in the picture.

We can describe the differing appearances as saints who seem to inhabit a world close to our own (they alone have a ground line), the Virgin and Child who are elevated and look beyond us, and the angels who reside near the hand of God transcend our space. As the eye moves upward we pass through zones: the saints, standing on ground and therefore closest to us, and then upward and more ethereal until we reach the holiest zone, that of the hand of God. These zones of holiness suggest a cosmos of the world, earth and real people, through the Virgin, heavenly angels, and finally the hand of God. The viewer who stands before the scene make this cosmos complete, from “our earth” to heaven.