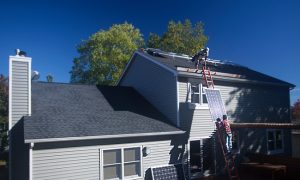 Corporate-backed utilities have quashed solar initiatives for years, but residents fought back.

Commonly topping any list of obstacles to a home solar energy boom are price and storage—photovoltaic panels aren’t cheap to own or install, and they maintain the obvious drawback of producing energy during daylight hours only. However, another barrier to the spread of consumer-generated solar has been the utility companies powering American homes.

“Power companies only sell one product in order to make their profit. They don’t sell cars. They don’t sell T-shirts. They sell electrons, and they’re not in the business of having those electrons taken off the grid,” said Ted Trabue, managing director of DC Sustainable Energy Utility, a nonprofit specializing in promoting energy efficiency in Washington, D.C. and surrounding areas.

Through rates, regulation, and political influence, the utility industry has managed to suppress solar energy production even in sunny states where one might reasonably expect a boom. But that might be changing, thanks to recent votes in Nevada and Florida and a surprising new regulatory agreement in Mississippi.

“It’s taken a long time to put this together and get it launched, but it’s come to fruition,” said Mississippi Sierra Club Director Louie Miller of a new, progressive net metering agreement between the Mississippi Public Service Commission and utility companies. The rule changes, made in September, will make home electricity generation more profitable for customers. “I have people in Austin, Texas—one of the bluest cities in the country—who say they don’t have [a net metering policy] this good,” Miller said.

Will Hegman, owner of solar installation company Mississippi Solar LLC, has worked for years under an energy commission that rarely encouraged his business. Even now, after so long with such scant support, he says he is still afraid to get his hopes up.

“It’s too soon to see a difference,” he said. “I’ve had utility companies use every trick to stop me and my customers—from convoluted permits to impossible connection requirements—and there was nothing to stop them but our determination to make solar work. After all that, it’s hard to be optimistic just yet.”

But in changing its tune on net metering, Mississippi is showing a promising new trend toward standing up to the corporate-backed utility industry and its underhanded tactics.

For homeowners, one of the biggest roadblocks to installing $30,000 worth of solar panels is the cost. Many work around the price by signing lease or rent-to-own agreements with solar installers, which then recoup costs by selling the energy their panels generate back to the power companies. If solar electricity costs less to the utilities companies than the juice from their power lines, homeowners sees lowered monthly bills. Through a net metering agreement, customers might also get a credit from power companies for the electricity sold back to the grid.

The success of these leases depends on what the local power company is willing to pay for home-generated electricity. However, and historically, the price paid in Mississippi has been paltry. Utility companies like it that way, Trabue says.

In 2013, electric-company shareholder advocate Edison Electric Institute acknowledged the threat solar posed to the power industry. Its report explained that solar customers might be tempted to limit their grid use to backup purposes only or even permanently abandon the grid as solar technology grows more affordable. This is bad news for the power industry, which requires a stable army of ratepayers to recoup construction costs for its big, expensive power plants and infrastructure.

But the utility industry, however embattled, is still wealthy and politically entrenched. It can afford to donate heavily to political campaigns. Nevada Gov. Brian Sandoval received $10,000 in campaign contributions from Nevada Power Company in 2010 and another $10,000 from Sierra Pacific Power Company, among others, in 2014. As governor of that sun-drenched state, he appointed three members to the Nevada Public Utility Commission that single-handedly hobbled solar and recklessly endangered almost 6,000 solar-related jobs by tripling solar customers’ monthly charges in January. The commission also cut solar customers’ credit for the home-generated electricity sold back to the power grid.

While Nevada stumbled, however, Mississippi bounded ahead. Its September agreement created potential electricity buyback rates that are closer to the local rate power companies pay themselves when trading each other’s electricity. The new rates are especially helpful to people with low incomes, since a solar panel owner who is at or below 200 percent of the federal poverty level now receives an additional 2 cents per kilowatt-hour of electricity they generate, on top of the increased buyback rate.

Mississippi replicates Nevada’s 3-percent solar cap, but advocates say the restriction is not likely to throttle the state’s near-nonexistent solar production yet. Mississippi Commissioner Brandon Presley said the cap may be temporary, in any case.

“We’re going to monitor the rule, because this rule was meant to [open the door] … to renewable energy. This is a work in progress,” Presley said.

In Nevada, despite the intensifying corporate efforts to stifle solar, voters recently took a successful stand. In November, they approved a ballot initiative that blasted the state’s monopoly utility system, wherein ratepayers were captive to the utility company serving their area. The new competitive electricity market will allow ratepayers to choose their own power provider, regardless of their location. Elon Musk, chairman of electric car manufacturing company Tesla Motors and solar panel provider SolarCity, backed the initiative. It was opposed by Nevada energy tycoon Warren Buffett, whose company Berkshire Hathaway owns Nevada utility company NV Energy.

Florida is another sunny state where solar potential has historically been shaded by aggressive utility influence. It has no regulated electricity buyback rate to encourage customer solar investment, and by not allowing power purchase agreements between solar panel installers and consumers, its constitution kills most leasing plans that would have provided customers with alternative methods for buying expensive panels. Mississippi, in comparison, made sure to couple its generous new rates with a rule permitting third-party leasing.

Florida also restricts electricity sales to utility companies, so no landlord or business can reduce its carbon footprint or electricity bills by installing solar panels. Mississippi rejected such a third-party restriction outright.

Like Nevada, however, Florida voters appear to be slowly skewing toward solar. They rejected another November ballot amendment, largely funded by power companies, that claimed it would have encouraged solar development but actually would have given power companies a constitutional mandate to lobby the state’s public service commission with rate hike proposals for solar customers.

Al Gore, in an October speech at a Miami university, railed against the amendment: “[Utility companies] are trying to fool you into amending your state constitution in a way that gives them the authority to shut down net metering and do in Florida what they did in Nevada and just kill the solar industry.”

Mississippi’s new agreement also puts it ahead of perpetually sunny Arizona, where power company APS is trying to lobby that state’s public service commission to saddle solar customers with a per kilowatt charge that is more than twice that charged to nonsolar customers. Utilities routinely discourage development by charging solar owners prohibitive monthly fees for connecting their systems to company power lines. Mississippi commissioners deftly quashed that tactic when they decided to limit all extra charges to a one-time upgrade charge of $87.

Yet, even this stand might not have happened without a trigger. Like in Florida and Nevada, it was individual Mississippi voters who stepped up and pushed renewable energy forward. The stand came after Mississippi Power Company squandered $6.9 billion on an experimental lignite-burning plant costing more than Mississippi’s entire 2014 and 2015 annual budgets. Enraged voters busted the three-person public service commission that approved the construction of the plant and replaced its two corporate-friendly members with two very angry people who made utility company acrimony the basis of their campaigns. The refurbished commission wrenched an ignored net metering docket out of limbo and had it before power companies to sign before their chairs were warm.

A second Mississippi power company, Entergy Mississippi, signed onto its own consumer-friendly net metering agreement with the commission in August. The company appears supportive of the measure, despite the PSC approving a generous electricity buyback rate, and solar lease and renter options, against Entergy’s recommendations.

“We believe our customers should have the choice to self-generate electricity for their own use and should also have the ability to provide excess energy to the distribution grid and be credited for such energy on their electric bill,” said Entergy spokeswoman Mara Hartmann.

Miller said power companies still might have revolted had a timely legal settlement not dragged pack leader MPC to the negotiating table. The company’s recent settlement with the Mississippi Sierra Club restricts it from opposing solar-friendly net metering policies and lobbying Mississippi legislators against those policies. Miller said commission turnover and the settlement provided a perfect one-two punch that knocked the teeth out of every tactic power companies successfully exploited in other states.

“The power companies took too much this time, and we were able to use that against them,” Miller said. “You know what they say: A young pig gets fed, but a fat pig gets slaughtered.”