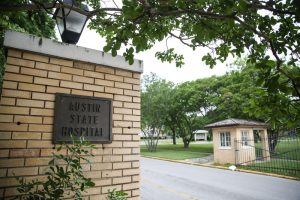 The Austin State Hospital is shown on April 29, 2016. Despite an infusion of funding from lawmakers for the state’s mental health care system, Texas struggles to provide psychiatric care for all patients who need it.

When Stephanie Contreras picked up her son last October from a private psychiatric hospital in South Texas, “he was white as a sheet, blue in the lips,” she said.

Her son’s emergency hospitalization had been intended to stabilize his mental illness, but she found him on the verge of a diabetic coma. He had failed to receive proper medication, she said. Contreras, who lives in McAllen, believes this would not have happened if he had been able to get care at one of Texas’ 10 state hospitals for people with severe mental illness, where he had stayed before. But in at least five cases over about a decade, Contreras said, her son was turned away from state hospitals because they were full.

“He was emotionally traumatized” by the difficulties of getting into high-quality psychiatric care and facing a shifting team of medical professionals, she said. “Time after time, there would be no beds in the Valley.”

Contreras’ son, now 36, has schizoaffective disorder, which includes schizophrenia and mood disorder symptoms. Over an 11-year period of his adult life, he spent more time in psychiatric hospitals than in the outside world, Contreras said. But getting him into care often proved difficult. Contreras remembered spending long nights in the emergency room, calling private and public hospitals to see if any had space to take him in for stays that ranged from two weeks to three months.

Despite an infusion of funding from lawmakers for the state’s mental health care system, Texas struggles to provide psychiatric care for all patients who need it. Crumbling, century-old state hospitals today have around 400 people on waiting lists, and the number of beds the state pays for in private facilities has not kept up with the state’s rapid population growth. At the same time, publicly funded options for people who need mental health care but are not yet in crisis are even harder to come by, experts say.

Advocates for people with mental illness say the result is a public health emergency. The longer people must wait to get emergency mental health care, the greater a danger they pose to themselves and others, advocates say. They hope to persuade Texas lawmakers in 2017 to finance more psychiatric hospital beds, but where those beds would go — and where the money would materialize from to pay for them — remains to be seen.

Contreras, now the executive director of said the Rio Grande Valley affiliate of the National Alliance on Mental Illness, said her son has enjoyed a “blessed” life despite his medical issues. In 2014, he graduated with an associate’s degree in architectural drafting.

But in her work advocating for people with mental illness, Contreras said her son’s challenges with the current system are instructive, as she regularly encounters people who struggle to get adequate and timely mental health care close to home.

In the face of criticism, Texas lawmakers tout recent improvements to the state’s mental health safety net. They point to new funding that encourages mental health professionals to practice in underserved areas, an expansion of innovative behavioral health care programs paid for by Medicaid and new telemedicine regulations intended to make it easier for patients to connect with psychiatrists remotely.

In March, the Senate’s chief budget writer and former Health and Human Services Committee chairwoman, state Sen. Jane Nelson, R-Flower Mound, said Texas had invested “significant resources” in mental health care in recent years. Her office calculated that public expenditures on mental health care had grown by $192 million from the 2013 legislative session to the 2015 session. And when mental health spending from Medicaid, the joint state-federal insurance program for the poor and disabled, is included, total spending was up $483 million, she said.

“We have serious challenges to address, but I want to make sure we have a true understanding of our commitment to mental health — by knowing not only how much we are spending but also how we are spending the funds,” Nelson said in an emailed statement.

Still, the number of state-funded beds in psychiatric hospitals has remained flat since 2013, hovering around 2,900 at any given time, according to the Department of State Health Services. That includes capacity in the state hospital system as well as state-contracted beds at private facilities.

More troubling for advocates is a decline in the number of beds relative to the state’s population. As Texas has grown, the per-capita psychiatric hospital capacity has fallen, from 11.3 to 10.5 beds per 100,000 people between 2013 and 2015.