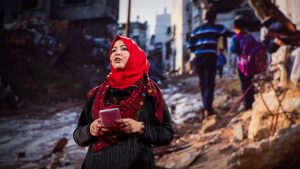 Ameera Harouda leads journalists to the harrowing (and often hidden) stories of the Gaza Strip that they couldn’t find on their own.

When Ameera Harouda hears the sounds of bombs or shells, she heads straight towards them. “I want to be there first because these stories should be told,” says Gaza’s first female “fixer,” a role that allows her to guide journalists into chaotic, war zone scenarios in her home country, which she still loves despite its terrible situation. Find out what motivates Harouda to give a voice to Gaza’s human suffering in this unforgettable talk.

In the Gaza Strip, foreign correspondents rely on state-approved “fixers” to direct and guide them on the ground. Although Hamas requires journalists to use fixers as local “sponsors,” the fixers also provide ease of movement, translation and an eye for where the real stories are — making them an invaluable asset in frequently chaotic scenarios.

Ameera Harouda has been a fixer for over a decade. Although many fixers are male, journalists increasingly seek women like Harouda for their access to areas where men are forbidden, and for a new lens on stories of human suffering often overlooked in the headlines.

“When the violence escalates, Ameera Ahmad Harouda is the ‘go-to’ news fixer for international correspondents who want to cover Gaza.” — BBC News, November 30, 2015