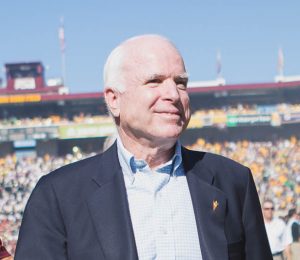 “I challenge the nominee to set the example for what our country can and should represent.” – Senator John McCain

Say whatever you want about John McCain — and I have said plenty — the former Prisoner of War (POW) and war hero is a patriot and a decent man.

He displayed such during the 2008 presidential campaign when a woman at a town hall meeting referred to Obama as an “Arab” and McCain, retaking the microphone, responded “”No, ma’am. He’s a decent family man [and] citizen that I just happen to have disagreements with on fundamental issues and that’s what this campaign’s all about.”

When Donald Trump derided the former POW for having been captured by the North Vietnamese, John McCain chose to ignore the insult.

This time, however, when Trump insulted the Gold Star parents of a Muslim-American man who gave his life for his country during the Iraq War, and while many Republican leaders stayed silent, Senator John McCain chose to speak out.

The following are excerpts of Senator McCain’s statement taken from articles in the New York Times and Politico:

In recent days, Donald Trump disparaged a fallen soldier’s parents…He has suggested that the likes of their son should not be allowed in the United States — to say nothing of entering its service. I cannot emphasize enough how deeply I disagree with Mr. Trump’s statement. I hope Americans understand that the remarks do not represent the views of our Republican Party, its officers or candidates.

I wear a bracelet bearing the name of a fallen hero, Matthew Stanley, which his mother, Lynn, gave me in 2007 at a town-hall meeting in Wolfeboro, New Hampshire…His memory and the memory of our great leaders deserve better from me.

Make no mistake: I do not valorize our military out of some unfamiliar instinct…I grew up in a military family, and have my own record of service, and have stayed closely engaged with our armed forces throughout my public career. In the American system, the military has value only inasmuch as it protects and defends the liberties of the people.

In the end, I am morally bound to speak only to the things that command my allegiance, and to which I have dedicated my life’s work: the Republican Party, and more important, the United States of America. I will not refrain from doing my utmost by those lights simply because it may benefit others with whom I disagree. I claim no moral superiority over Donald Trump. I have a long and well-known public and private record for which I will have to answer at the Final Judgment, and I repose my hope in the promise of mercy and the moderation of age. I challenge the nominee to set the example for what our country can and should represent.

Gold Star family members of twenty-three fallen service-members have expressed their dismay at Donald Trump’s treatment of the family of Captain Humayun Khan, and are demanding an apology.

The letter, as published by votevets.org is below:

You are not just attacking us, you are cheapening the sacrifice made by those we lost.

You are minimizing the risk our service members make for all of us.

This goes beyond politics. It is about a sense of decency. That kind decency you mock as “political correctness.”

We feel we must speak out and demand you apologize to the Khans, to all Gold Star families, and to all Americans for your offensive, and frankly anti-American, comments.

We hope you will hear us.

The names of the Gold Star families signing the letter follow.