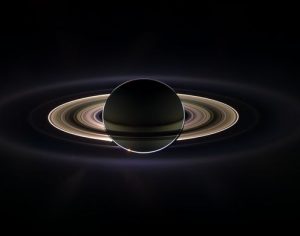 Saturn and its rings backlit by the sun, which is blocked by the planet in this view. Encircling the planet and inner rings is the much more extended E-ring. NASA/JPL/Space Science Institute

By Dr. Dan Reisenfeld / 04.21.2017
Professor of Physics and Astronomy
The University of Montana

Cassini is the most sophisticated space probe ever built. Launched in 1997 as a joint NASA/European Space Agency mission, it took seven years to journey to Saturn. It’s been orbiting the sixth planet from the sun ever since, sending back data of immense scientific value and images of magnificent beauty.

Cassini now begins one last campaign. Dubbed the Grand Finale, it will end on Sept. 15, 2017 with the probe plunging into Saturn’s atmosphere, where it will burn up. Although Saturn was visited by three spacecraft in the 1970s and 1980s, my fellow scientists and I couldn’t have imagined what the Cassini space probe would discover during its sojourn at the ringed planet when it launched 20 years ago. 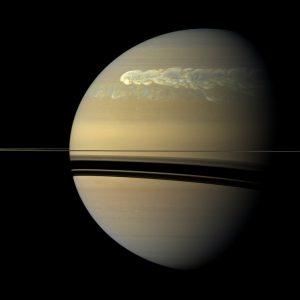 A huge storm churning across the face of Saturn. At the time this image was taken, 12 weeks after the storm began, it had completely wrapped around the planet. NASA/JPL-Caltech/SSI

A planet of dynamic change

Massive storms periodically appear in Saturn’s cloud tops, known as Great White Spots, observable by Earthbound telescopes. Cassini has a front-row seat to these events. We have discovered that just like Earth’s thunderstorms, these storms contain lightning and hail.

Cassini has been orbiting Saturn long enough to observe seasonal changes that cause variations in its weather patterns, not unlike the seasons on Earth. Periodic storms often appear in late summer in Saturn’s northern hemisphere.

In 2010, during northern springtime, an unusually early and intense storm appeared in Saturn’s cloud tops. It was a storm of such immensity that it encircled the entire planet and lasted for almost a year. It was not until the storm ate its own tail that it eventually sputtered and faded. Studying storms such as this and comparing them to similar events on other planets (think Jupiter’s Great Red Spot) help scientists better understand weather patterns throughout the solar system, even here on Earth.

Having made hundreds of orbits around Saturn, Cassini was also able to deeply investigate other features only glimpsed from Earth or earlier probes. Close encounters with Saturn’s largest moon, Titan, have allowed navigators to use the moon’s gravity to reorient the probe’s orbit so that it could swing over Saturn’s poles. Because of Saturn’s strong magnetic field, the poles are home to beautiful Aurorae, just like those of Earth and Jupiter. 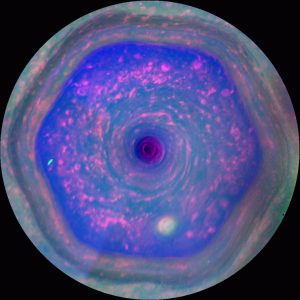 Saturn’s six-sided vortex at Saturn’s north pole known as ‘the hexagon.’ This is a superposition of images taken with different filters, with different wavelengths of light assigned colors. NASA/JPL-Caltech/SSI/Hampton University

Cassini has also confirmed the existence of a bizarre hexagon-shaped polar vortex originally glimpsed by the Voyager mission in 1981. The vortex, a mass of whirling gas much like a hurricane, is larger than the Earth and has top wind speeds of 220 mph.

Home to dozens of diverse worlds

Cassini discovered that Saturn has 45 more moons than the 17 previously known – placing the total now at 62.

The largest, Titan, is bigger than the planet Mercury. It possesses a dense nitrogen-rich atmosphere with a surface pressure one and a half times that of Earth’s. Cassini was able to probe beneath this moon’s cloud cover, discovering rivers flowing into lakes and seas and being replenished by rain. But in this case, the liquid is not water, but rather liquid methane and ethane. 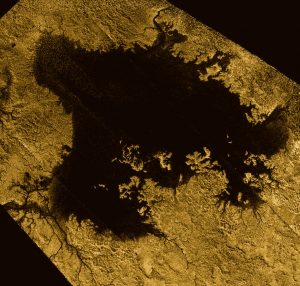 That’s not to say that water is not abundant there – but it’s so cold on Titan (with a surface temperature of -180℃) that water behaves like rock and sand. Although it has all the ingredients for life, Titan is essentially a “frozen Earth,” trapped at that moment in time before life could form.

The sixth-largest moon of Saturn, Enceladus, is an icy world about 300 miles in diameter. And for me, it’s the site of the Mission’s most spectacular finding.

The discovery started humbly, with a curious blip in magnetic field readings during the first flyby of Enceladus in 2004. As Cassini passed over the moon’s southern hemisphere, it detected strange fluctuations in Saturn’s magnetic field. From this, the Cassini magnetometer team inferred that Enceladus must be a source of ionized gas.

Intrigued, they instructed the Cassini navigators to make an even closer flyby in 2005. To our amazement, the two instruments designed to determine the composition of the gas that the spacecraft flies through, the Cassini Plasma Spectrometer (CAPS) and the Ion and Neutral Mass Spectrometer (INMS), determined that Cassini was unexpectedly passing through a cloud of ionized water. Emanating from cracks in the ice at Enceladus’ south pole, these water plumes gush into space at speeds up to 800 mph.

I am on the team that made the positive identification of water, and I have to say it was the most thrilling moment in my professional career. As far as Saturn’s moons were concerned, everyone thought all of the action would be at Titan. No one expected small, unassuming Enceladus to harbor any surprises.

Geologic activity happening in real time is quite rare in the solar system. Before Enceladus, the only known active world beyond Earth was Jupiter’s moon Io, which possesses erupting volcanoes. To find something akin to Old Faithful on a moon of Saturn was practically unimaginable. The fact that it all started with someone noticing an odd reading in the magnetic field data is a wonderful example of the serendipitous nature of discovery. 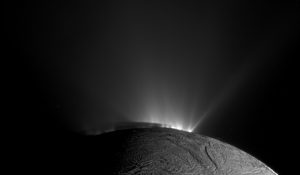 The geyser basin at the south pole of Enceladus, with its water plumes illuminated by scattered sunlight. NASA/JPL-Caltech/Space Science Institute

The story of Enceladus only becomes more extraordinary. In 2009, the plumes were directly imaged for the first time. We now know that water from Enceladus comprises the largest component of Saturn’s magnetosphere (the area of space controlled by Saturn’s magnetic field), and the plumes are responsible for the very existence of Saturn’s vast E-ring, the second outermost ring of the planet.

More amazingly, we now know that beneath the crust of Enceladus is a global ocean of liquid saltwater and organic molecules, all being heated by hydrothermal vents on the seafloor. Detailed analysis of the plumes show they contain hydrocarbons. All this points to the possibility that Enceladus is an ocean world harboring life, right here in our solar system.

When Cassini plunges into the cloud tops of Saturn later this year, it will mark the end of one of the most successful missions of discovery ever launched by humanity.

Scientists are now considering targeted missions to Titan, Enceladus or possibly both. One of the most valuable lessons one can take from Cassini is the need to continue exploring. As much as we learned from the first spacecraft to reach Saturn, nothing prepared us for what we would find with Cassini. Who knows what we will find next?