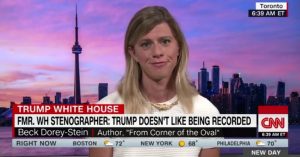 “It’s clear that White House stenographers do not serve his administration, but rather his adversary: the truth.”

A former White House stenographer on Wednesday offered new details into why she resigned from the post, saying she felt President Donald Trump was “not even trying to tell the truth” to the American public.

Beck Dorey-Stein began as a White House stenographer in 2012 under the Obama administration, and resigned just months after Trump took office.

“I quit because I couldn’t be proud of where I worked anymore,” she told CNN‘s “New Day.”

“I was so proud to serve under the Obama administration, and I felt like president Trump was lying to the American people and also not even trying to tell the truth—he wasn’t even going the extra mile to have the stenographers in the room,” she said.

Breaking with precedent, she said the Trump White House office often “didn’t include us [stenographers] in his meetings with the press.” The president, “we quickly learned, does not like microphones near his face.”

She said she’d “never seen anything” like what happened before Trump’s interview with Bill O’Reilly in 2017 when Trump spent an hour with the former Fox News host in private ahead of their interview.

“In my five years with President Barack Obama, off-the-record discussions with reporters happened after work hours—not for an hour in the middle of the work day, and certainly not before an interview,” she wrote in an op-ed at the New York Times. “When a president spoke on the record with a reporter, his staff made sure to have a stenographer present so there could be an official White House transcript, just in case the reporter came out with an inaccurate quotation.”

“If President Trump was really interested in fighting ‘fake news,’ he would have a stenographer present and also would have that transcript ready to go and say, ‘…We have the transcript, we can just refer to this,'” she said, also pointed to a recent interview Trump gave with British tabloid The Sun which he dubbed “fake news.”

“Mr. Trump likes to call anyone who disagrees with him ‘fake news,'” she wrote at the Times. “But if he’s really the victim of so much inaccurate reporting, why is he so averse to having the facts recorded and transcribed?”

“It’s clear that White House stenographers do not serve his administration, but rather his adversary: the truth,” she concluded. Watch her interview on CNN above.