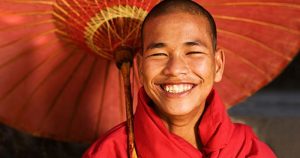 The Truths We’re Distracting Ourselves From

Dualistic notions, such as birth and death, being and non-being, sameness and otherness, coming and going, are the foundation of all afflictions. Meditating on the three doors of liberation helps us throw away these notions. The three doors of liberation, which are taught in every Buddhist tradition, are emptiness, signlessness, and aimlessness. Contemplating these three profound truths can help liberate us from fear and suffering. They are our doorways to freedom.

Living mindfully and with concentration, we see a deeper reality and are able to witness impermanence without fear, anger, or despair. Nirvana is not a place to get to. It’s not something in the future that we’re trying to reach. Nirvana is available to us right now. Emptiness, signlessness, and aimlessness are called the three doors of liberation because if we meditate on them, they will liberate us from all kinds of discriminative thinking so we can touch our true nature. 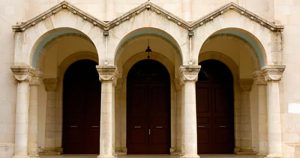 The three doors of liberation – emptiness, signlessness, and aimlessness.

No Self: The Perfect Communication

The first door of liberation is emptiness. Emptiness is not a philosophy; it is a description of reality. Suppose you have two glasses, one full of tea and one without any tea. You would describe the glass without tea as empty, but empty of what? The glass is empty of tea, but it’s full of air. And the glass itself still exists, whether or not it contains any tea. Emptiness does not mean non-being. There is a big difference between emptiness and non-existence. In order to be empty, you have to be there.

Emptiness is always emptiness of something, just as consciousness is always consciousness of something. When we look into a beautiful chrysanthemum, we see that everything in the cosmos is present in that flower—clouds, sunshine, soil, minerals, space, and time. The flower can’t exist by itself alone. The glass, the flower, everything inside us and around us, and we ourselves are only empty of one thing: a separate independent existence.

The simplest description of emptiness in the Buddhist teachings is this sentence: This is because that is. A flower cannot exist by itself alone. To be can only mean to inter-be. To be by oneself alone is impossible. Everything else is present in the flower; the only thing the flower is empty of is itself.

Looking in this way, we begin to see that everything has the nature of emptiness. Sometimes that nature of emptiness is called non-self. But don’t worry, non-self doesn’t mean that you aren’t there. Just as the glass that’s empty of tea still exists, you still exist too, even without a separate self.

When we look at an action, we believe there needs to be a separate actor existing behind it. The wind blows, yet really there is no blower. There is only the wind, and if it doesn’t blow, it’s not the wind at all. 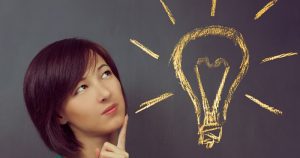 When we think something, we are those thoughts.

There is a verse that’s sometimes recited before bowing to a statue of the Buddha that goes:

The one who bows
and the one who is bowed to
are both by nature empty.
Therefore the communication between us
is inexpressibly perfect.

A buddha is made only of non-buddha elements, just as I am made only of non-me elements. If you remove the non-me elements from me—the sun, the dirt, the garbage, the minerals, the water, my parents, and my society—there’s no me left. If you remove the non-buddha elements from a buddha, there’s no buddha left. Communication is perfect when we can understand that the one who bows and the one who is bowed to are both empty. This is meditation.

If we look at a child, we can see that we are fully present in every cell of that child. If we can’t understand how that child could possibly act a certain way, it’s helpful to remember that the child doesn’t have a separate self. A child’s parents and ancestors are inside of him. When he walks and talks, they walk and talk as well.

When we can see those around us with this understanding, instead of with anger and attachment, we enjoy the fruit of the contemplation on emptiness. 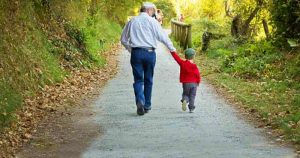 A child’s parents and ancestors are inside of him.

No Form: The Wonderful Journey of Singlessness

The second door of liberation is signlessness. A sign marks the appearance of something, its form. We recognize things based on their sign, but we are often fooled by the outer form of things. The Buddha said, “Where there is a sign, there is deception.”

For example, when we look up at the sky, we see a particular cloud. But if we look long enough, it seems the cloud we are looking at disappears. The cloud has become rain, mist, or snow, and we don’t recognize it anymore.

If you’ve grown attached to that cloud, you may think, “Oh, my beloved cloud, where are you now? I miss you. You’ve passed from being into non-being. I can’t see you anymore.” Maybe you don’t feel this way about a cloud, but this is certainly how you feel when you lose someone who is close to you. Just yesterday your friend was still alive. Now it seems that she has passed from being into non-being.

But in fact, our cloud is still there, because it’s impossible for a cloud to die. It may become snow, hail, or rain, but it won’t become nothing. It’s impossible to pass from being into non-being. Your beloved one is still somewhere there. If you have the wisdom of signlessness, you can still recognize your beloved one in her new forms.

Imagine that I pour some tea from a teapot into an empty glass. When I drink the tea, it changes form. If I give a talk soon after drinking that tea, the talk will have a little bit of tea in it. So the tea is not just in the pot. It has a journey. It travels and has many forms.

This is true for us as well. We are not only the body, thoughts, and feelings we have right now. Every thought, word, and action we produce continues after our bodies have disintegrated. We don’t need to worry about no longer existing. Our forms change, but nothing is lost. Whether the cloud has the form of a cloud, the rain, the river, or the tea, it continues on its wonderful journey. 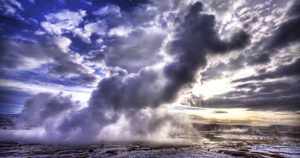 Whether the cloud has the form of a cloud, the rain, or the tea, it continues on its journey.

No Goal: The Happiness of Aimlessness

The third door of liberation is aimlessness. Aimlessness means you don’t put anything in front of you as the object of your pursuit. What you are looking for is not outside of you; it is already here. You already are what you want to become. Concentrating on aimlessness releases your longing and craving for something in the future and elsewhere.

This insight helps you stop running. Only when you stop running can you get the fulfillment and happiness you have been looking for. A wave doesn’t have to go and look for water. It is water right in the here and now. A cedar tree doesn’t have any desire to be a pine or a cypress or even a bird. It’s a wonderful manifestation of the cosmos just as it is. You are the manifestation of the cosmos. You are wonderful just like that. 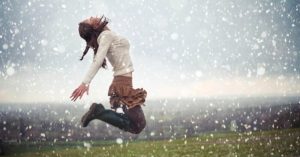 Only when you stop running can you get fulfillment and happiness.

We are taught to think that if we are aimless, we won’t get anywhere. But where are we going? We think we are born and we have to achieve something before we die. Suppose we draw a line from left to right, representing the course of time. We pick one point—call it Point B—and we call it birth. Someone is born in this moment. We make a birth certificate for this baby, thinking that person exists starting at Point B. But in fact, the child was already there. Even before the moment of conception, the seeds of the child existed in other forms. Point B is a moment of continuation. There is no beginning.

We think there will be a moment when we stop being. On the imaginary line we have drawn, let’s call it Point D, death. We believe that at birth we passed from non-being into being, and we believe that at death we will pass from being back into non-being. Looking deeply into our notions of being and non-being, aware of the emptiness and signlessness of all things, we touch the reality of the birthless and deathless nature of all things.

When we walk through the doors of liberation, we extinguish all notions. There is no longer any need for fear. If the wave knows how to rest in the water, she enjoys going up and she enjoys going down. She’s not afraid of being and non-being. She’s not afraid of coming and going. She is capable of touching the ocean in herself. The three doors of liberation remind us that we are no different than the wave: empty, signless, and able to touch the ultimate inherent in us at any moment.