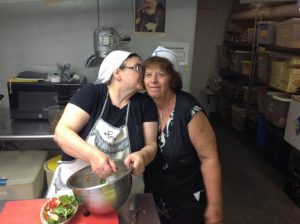 When it comes to tasty food, nothing beats grandma’s cooking! Well, except maybe more grandmas cooking in the same kitchen, which is exactly what goes on at Staten Island’s Enoteca Maria, a charming restaurant that employs grandmas from various parts of the world, instead of professional chefs.

Enoteca Maria owner Jody Scaravella says that he came up with the idea of placing grandmothers in a restaurant kitchen about 12 years ago, after suffering a series of tragic losses. His grandmother, his mother and his sister had passed away within a few years of each other, and the idea of having an Italian grandmother in the kitchen just felt comforting to him. He got his first cooks by posting an ad in the paper seeking ‘Italian housewives to cook regional dishes’. “I was still building the restaurant then, so I asked them to come to my place to cook instead — I live in the neighborhood. And they came with dishes, and their husbands and a few grandchildren they were looking after for the day. The whole thing was like a Fellini movie,” Scaravella remembers.

But that was only the beginning. These days, the unique New York restaurant has a rotating staff of grandmothers from around 30 different places around the world, including Palestine, the Czech Republic, Argentina, Nigeria and Algeria. They are known as ‘nonnas’ – Italian for ‘grandmas’ – and take turns in cooking traditional recipes from their respective culture, offering patrons the chance to experience new and exciting dishes virtually every night.

“The concept has just mushroomed,” Scaravella recently told Gothamist. “I talk to everybody when somebody gets in, we talk about the concept, I always ask them if you know somebody who wants to cook.” His original idea of having Italian grandmothers cooking instead of actual chefs has evolved into a culinary celebration of diversity, and people are absolutely loving it. They come in from all over the world to see the famous nonnas of Enoteca maria and try their centuries old recipes. 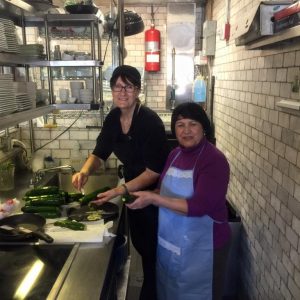 “I regularly get phone calls from Australia, from England, and from Italy to book reservations. I’m always flattered by that,” Scaravella said. “We get a lot of people who come from Manhattan, the ferry is right down the block. That’s also very flattering, because there’s a restaurant every twenty feet in Manhattan. Usually at the end of the day, the people will applaud the nonnas that have cooked for them. They get standing ovations on a regular basis and it’s really something nice.” 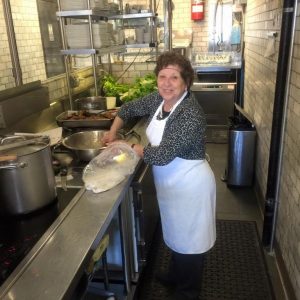 The grandmas themselves love cooking in the restaurant. Although some of them actually live on Staten Island, most of them come from Brooklyn and some from as far as The Bronx and New Jersey, for a chance to show their skills in the kitchen.

“I love this food,” Scaravella told the Village Voice. “The old-world dishes with family secret ingredients. People are forgetting, as our world gets more fast-food and disposable. I want to protect that way of cooking.”

“I love the nonnas, and the nonnas love me,” he concludes.