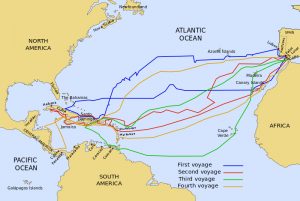 The routes of the four Voyages of Christopher Columbus, 1492-1504 to the Caribbean Islands and the coast of Central America (image: CC BY-SA 3.0) 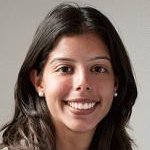 What does “pre-Columbian” mean?

The original inhabitants of the Americas traveled across what is now known as the Bering Strait, a passage that connected the westernmost point of North America with the easternmost point of Asia. The Western hemisphere was disconnected from Asia at the end of the last Ice Age, around 10,000 B.C.E.

In 1492, the Genoese explorer Christopher Columbus arrived at the islands of Cuba and Hispaniola (today Haiti and the Dominican Republic), mistakenly thinking he had reached Asia. Columbus’ miscalculation marked the first step in the colonization of the Americas, or what was then seen as a “New World.” Incorrectly referring to the native inhabitants of Hispaniola as “Indians” (under the assumption that he had landed in India), Columbus established the first Spanish colony of the Americas. “Pre-Columbian” thus refers to the period in the Americas before the arrival of Columbus. 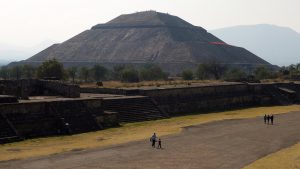 Pyramid of the Sun, Teōtīhuacān. Teōtīhuacān reached its peak from the 1st to the mid-6th century C.E. The main structures include the Pyramids of the Sun and the Moon, Avenue of the Dead, and the Temple of Quetzalcoatl (feathered serpent). Teotihuacan was home to as many as 125,000 people. The name Teōtīhuacān was given by the Aztecs long after the city had been abandoned in c. 550 C.E. The original name is lost.

The Spanish conquistadores (conquerors) found that the “New World” was in fact not new at all, and that the indigenous people of Mesoamerica had established advanced civilizations with densely populated cities and towering architectural monuments such as at Teōtīhuacān, as well as advanced writing systems.

The term pre-Columbian is complicated however. For one thing, although it refers to the indigenous peoples of the Americas, the phrase does not directly reference any of the many sophisticated cultures that flourished in the Americas (think of the Aztec, Inka, or Maya, to name only a few) and instead invokes a European explorer. For this reason and because indigenous peoples flourished before and after the arrival of the Europeans, the term is often seen as flawed. Other terms such as pre-Hispanic, pre-Cortesian, or more simply, ancient Americas, are sometimes used.

What does “Mesoamerica” mean? 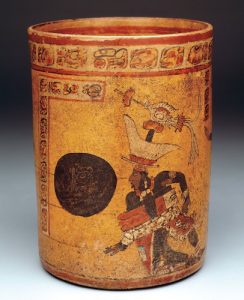 The region of Mesoamerica—which today includes central and south Mexico, Belize, Guatemala, and the western portions of Honduras and El Salvador—consists of a diverse geographic landscape of highlands, jungles, valleys, and coastlines. Mesoamericans did not exploit technological innovations such as the wheel—though they were used in toys— and did not develop metal tools or metalworking techniques until at least until 900 C.E. Instead, Mesoamerican artists are known for producing megalithic (large stone) sculpture and extremely sharp weapons from obsidian (volcanic glass). Featherwork and stonework in basalt, turquoise, and jade dominated Mesoamerican artistic production, while exceptional textiles and metallurgy flourished further south, among pre-Columbian Andean and Central American cultures, respectively.

Pre-Columbian Mesoamerican cultures shared certain characteristics such as the ritual ballgame,* pyramid building, human sacrifice, maize as an agricultural staple, and deities dedicated to natural forces (i.e. rain, storm, fire). Additionally, some Mesoamerican societies developed sophisticated systems of writing, as well as an advanced understanding of astronomy (which allowed for the development of accurate and complex calendar systems, including the 260-day sacred calendar and the 365-day agricultural calendar). As a result, cities like La Venta and Chichen Itza were aligned in relation to cardinal directions and had a sacred center. The fact that many of these cultural trademarks persisted for more than 2,000 years across civilizations as distinct as the Olmec (c. 1200–400 B.C.E.) and the Aztec (c. 1345 to 1521 C.E.), demonstrates the strong cultural bond of Mesoamerican cultures.

The ballgame was played in different iterations at different times and in different places. It was played with a rubber ball that players hit with their elbows, hips, or knees. The ballgame was considered an important ritual in Mesoamerica and was practiced first by the Olmec and last by the Aztec. Since the rubber ball was solid and heavy, players wore protective gear to avoid injury and may have tried to score the ball through a ring, which was usually located high on the wall of the ballcourt. Numerous rubber balls and ballcourts have been discovered throughout Mesoamerica in El Tajín (image above) and Monte Albán, although the largest surviving ballcourt is located in Chichen Itza. While the ballgame was played by the elite, it was believed that the fate of the game and thus of the player was determined by the gods. As a result, the Mesoamerican ballgame held significant implications. Learn more about the ballgame here.