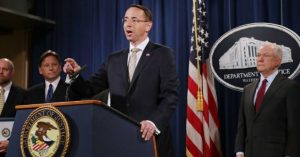 Finding a successor may not be simple. 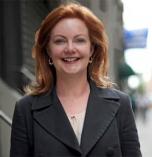 Speculation that President Trump is going to try to scuttle Special Counsel Robert Mueller’s investigation has gone into overdrive this week. The current thinking is that Trump will fire the man overseeing Mueller, Deputy Attorney General Rod Rosenstein, and thereby attempt to seize control of the inquiry.

Of course, Trump can fire Rosenstein. Then things get kind of messy.

If Trump’s goal is to replace Rosenstein with a loyalist willing to terminate or curtail Mueller, he has to journey down some winding paths.

First, he could try to fill Rosenstein’s empty post using the Vacancies Reform Act. That act, passed in 1998, enables the President to temporarily fill executive branch vacancies with anyone who has been confirmed for an executive branch post by the Senate or anyone above a certain salary level at DOJ.

Last year Buzzfeed looked at the list of potential “actings” and concluded there were literally thousands of them.

But not so fast. There are two stumbling blocks.

First, it is an open question whether the President can use the Act’s provisions for a vacancy created by a firing. The Justice Department has an internal opinion from the Office of Legal Counsel (OLC) saying he can. Some scholars dispute that view.

It’s not an academic question. There are real enforcement mechanisms. If OLC is wrong, then the Acting Deputy Attorney General, whoever that may be, would have been improperly appointed and any actions undertaken by him or her would “have no force or effect.” Courts have jurisdiction to resolve the dispute and to invalidate any actions undertaken by a wrongly-appointed “acting” Deputy Attorney General. In short, expect a flurry of litigation and therefore uncertainty.

Remember that the reason for Trump’s wrath at Rosenstein is that he is filling in – or “acting” – as attorney general, since Attorney General Jeff Sessions recused himself from supervising Special Counsel Robert Mueller. Indeed, in the very order that appointed Mueller, Rosenstein refers to himself as “Acting Attorney General.” Can an acting deputy attorney general assume the responsibilities of an acting attorney general? The mind reels. Nonetheless, I have not found any clear, written legal opinions or Justice Department guidance on the matter.

Faced with the legal risks of using the Vacancies Reform Act to put someone in the Deputy Attorney General slot, Trump may opt simply to fire Rosenstein and then let DOJ follow standard operating procedure. DOJ’s succession order was laid out in late 2016 by then Attorney General Loretta Lynch.

That brings us to Solicitor General Noel Francisco as next in line to serve as Acting Attorney General for purposes of the Mueller investigation.

But before Francisco can make any decisions about Mueller he needs to clear up a few things. Prior to joining DOJ, he was a partner at the law firm Jones Day, when was then and is now the Trump campaign’s law firm. Francisco himself did not work on Trump matters, but it appears he is still financially entangled with his old firm. He almost certainly does not have to recuse himself, but a chat with DOJ ethics counsel is definitely in order.

If Francisco is knocked out of play, the power devolves to Assistant Attorney General Steven Engel who was a lawyer for the Trump transition team. His role  in the transition is unclear, but he, like Francisco, is probably needs to have a chat with the DOJ ethics team before he can make any decisions.

Finally, if Engel is knocked out, Assistant Attorney General John C. Demers could take his turn in the hot seat. Demers may be fondly recalling his job before he came to Washington – assistant general counsel at Boeing.

As with so much in this administration, no one should feel confident that settled norms – or even laws – will be followed. It’s always possible that Trump will simply throw concern for the rule of law to the wind and force the outcome he wants. As Margo Channing would put it, “Fasten your seatbelts, it’s going to be a bumpy night.”