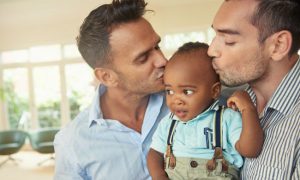 I want my son to know that families can look like anything. Families can be a mommy and a daddy, one parent, four parents, or—in our case—they can look like an interracial Gay couple and a birth mother who visits every couple of months, not to mention all his godparents, aunties and uncles, and grandparents. I want his concept of family to exist independently of any gender norms or expectations.

I want my son to have male role models, which he fortunately has in spades; his daddies are kind and brilliant. With a surgeon for a daddy and a papa in theater, he’s growing up with both art and science in his home, and truckloads of love.

I want my son to have female role models—also covered. The two men raising him have plenty of sisters and friends, all of whom are warm, hilarious, and accomplished badasses. And I’d like to be one of those role models. I’m working hard to be someone my child can be proud of, even though I’m not raising him.

When my son has his own kids (not for a while—he’s 3), I want it to be intentional. I want him and his partners to grow up with awesome, comprehensive sex education and free birth control. I want them to be able to enter a Planned Parenthood without being harassed. And if their procreation is unintentional, I want them to have more options than I did. I had no money, no partner, two roommates, and no desire for an abortion. How was I going to live with a newborn without leaving behind the life and community I’d spent the previous five years nurturing and fighting for in New York?

I want my son to grow up in a world where paid parental leave is a given. I never want my son, or his partner, to do the same mental math I did when I was pregnant: calculating how much unpaid time I could take off from my job, wincing because even two weeks would cost me dearly. And if his partner is a woman, I want them to live in a world where nobody expects her to take on the bulk of child care.

I want my son to graduate college without the debilitating student loan debt his mom had. As a writer, I want him to be able to pursue an artistic profession without accepting poverty as his default. I want him to enter a workforce where the women make as much as he does. I want him to know single mothers who raise their children with nary an eyebrow raised in their direction, free from slut-shaming or single-mother-blaming. I hope some of those single mothers are artists and that they don’t live below the poverty line.

And, of course, I want a million things for my son that have nothing to do with the circumstances that led me to place him for adoption. I want him to know he can love anyone, be anyone, change his gender identification and his pronouns and his name if he wants. I want him to follow his dreams, to live a life that is exactly as exciting or stable or weird or conventional as he wants.

Mostly, what I want for my son is a shiny, loving, explosively happy life. Just like any other mom.