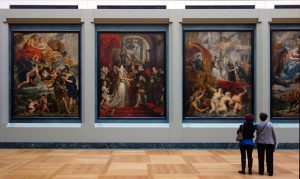 Peter Paul Rubens, three paintings from the 24-picture cycle Rubens painted for the Medici Gallery in the Luxembourg Palace, Paris (today in the Musée du Louvre, Paris), 1621-25, oil on canvas. From left to right: The Presentation of the Portrait of Marie de’ Medici, The Wedding by Proxy of Marie de’ Medici to King Henry IV, Arrival (or Disembarkation) of Marie de Medici at Marseilles (photo: Steven Zucker, CC BY-NC-SA 2.0)

Art history might seem like a relatively straightforward concept: “art” and “history” are subjects most of us first studied in elementary school. In practice, however, the idea of “the history of art” raises complex questions. What exactly do we mean by art, and what kind of history (or histories) should we explore? Let’s consider each term further.

The word “art” is derived from the Latin ars, which originally meant “skill” or “craft.” These meanings are still primary in other English words derived from ars, such as “artifact” (a thing made by human skill) and “artisan” (a person skilled at making things). The meanings of “art” and “artist,” however, are not so straightforward. We understand art as involving more than just skilled craftsmanship. What exactly distinguishes a work of art from an artifact, or an artist from an artisan?

When asked this question, students typically come up with several ideas. One is beauty. Much art is visually striking, and in the 18th, 19th and early 20th centuries, the analysis of aesthetic qualities was indeed central in art history. During this time, art that imitated ancient Greek and Roman art (the art of classical antiquity), was considered to embody a timeless perfection. Art historians focused on the so-called fine arts—painting, sculpture, and architecture—analyzing the virtues of their forms. Over the past century and a half, however, both art and art history have evolved radically. 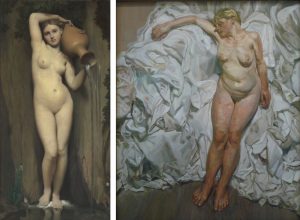 Artists turned away from the classical tradition, embracing new media and aesthetic ideals, and art historians shifted their focus from the analysis of art’s formal beauty to interpretation of its cultural meaning. Today we understand beauty as subjective—a cultural construct that varies across time and space. While most art continues to be primarily visual, and visual analysis is still a fundamental tool used by art historians, beauty itself is no longer considered an essential attribute of art.

A second common answer to the question of what distinguishes art emphasizes originality, creativity, and imagination. This reflects a modern understanding of art as a manifestation of the ingenuity of the artist. This idea, however, originated five hundred years ago in Renaissance Europe, and is not directly applicable to many of the works studied by art historians. For example, in the case of ancient Egyptian art or Byzantine icons, the preservation of tradition was more valued than innovation. While the idea of ingenuity is certainly important in the history of art, it is not a universal attribute of the works studied by art historians.

All this might lead one to conclude that definitions of art, like those of beauty, are subjective and unstable. One solution to this dilemma is to propose that art is distinguished primarily by its visual agency, that is, by its ability to captivate viewers. Artifacts may be interesting, but art, I suggest, has the potential to move us—emotionally, intellectually, or otherwise. It may do this through its visual characteristics (scale, composition, color, etc.), expression of ideas, craftsmanship, ingenuity, rarity, or some combination of these or other qualities. How art engages varies, but in some manner, art takes us beyond the everyday and ordinary experience. The greatest examples attest to the extremes of human ambition, skill, imagination, perception, and feeling. As such, art prompts us to reflect on fundamental aspects of what it is to be human. Any artifact, as a product of human skill, might provide insight into the human condition. But art, in moving beyond the commonplace, has the potential to do so in more profound ways. Art, then, is perhaps best understood as a special class of artifact, exceptional in its ability to make us think and feel through visual experience. 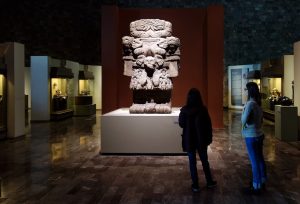 History: Making Sense of the Past

Like definitions of art and beauty, ideas about history have changed over time. It might seem that writing history should be straightforward—it’s all based on facts, isn’t it? In theory, yes, but the evidence surviving from the past is vast, fragmentary, and messy. Historians must make decisions about what to include and exclude, how to organize the material, and what to say about it. In doing so, they create narratives that explain the past in ways that make sense in the present. Inevitably, as the present changes, these narratives are updated, rewritten, or discarded altogether and replaced with new ones. All history, then, is subjective—as much a product of the time and place it was written as of the evidence from the past that it interprets.

The discipline of art history developed in Europe during the colonial period (roughly the 15th to the mid-20th century). Early art historians emphasized the European tradition, celebrating its Greek and Roman origins and the ideals of academic art. By the mid-20th century, a standard narrative for “Western art” was established that traced its development from the prehistoric, ancient, and medieval Mediterranean to modern Europe and the United States. Art from the rest of the world, labeled “non-Western art,” was typically treated only marginally and from a colonialist perspective.

The immense sociocultural changes that took place in the 20th century led art historians to amend these narratives. Accounts of Western art that once featured only white males were revised to include artists of color and women. The traditional focus on painting, sculpture, and architecture was expanded to include so-called minor arts such as ceramics and textiles and contemporary media such as video and performance art. Interest in non-Western art increased, accelerating dramatically in recent years. 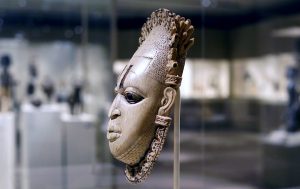 Today, the biggest social development facing art history is globalism. As our world becomes increasingly interconnected, familiarity with different cultures and facility with diversity are essential. Art history, as the story of exceptional artifacts from a broad range of cultures, has a role to play in developing these skills. Now art historians ponder and debate how to reconcile the discipline’s European intellectual origins and its problematic colonialist legacy with contemporary multiculturalism and how to write art history in a global era.

Smarthistory’s videos and articles reflect this history of art history. Since the site was originally created to support a course in Western art and history, the content initially focused on the most celebrated works of the Western canon. With the key periods and civilizations of this tradition now well-represented and a growing number of scholars contributing, the range of objects and topics has increased in recent years. Most importantly, substantial coverage of world traditions outside the West has been added. As the site continues to expand, the works and perspectives presented will evolve instep with contemporary trends in art history. In fact, as innovators in the use of digital media and the internet to create, disseminate, and interrogate art historical knowledge, Smarthistory and its users have the potential to help shape the future of the discipline.