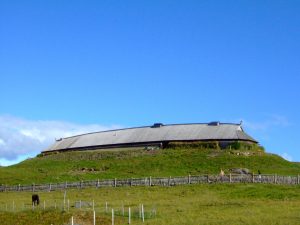 Archaeological artefacts found in places such as Viking graves and former villages – including animal bones, brooches, weapons, pottery, etc. – can tell researchers many things about the Vikings, including how wealthy they might have been, what they wore, what items they used in their homes and even what they liked to eat for dinner.

Perhaps the most notable difference between the Anglo-Saxons and the Scandinavians through the 9th century was that the former were Christian, while the majority of Scandinavians still held the pagan faith of their ancestors. This did change with increased contact with the Christian world, and therefore not all Scandinavians could be considered pagan. This religious difference does lead to differing evidence for material culture, with pagan graves containing grave goods, which Christianity forbade.

This material from graves is a strong indicator of what was important to a person, or at least deemed important by those who buried them. Across the Scandinavian world, men could be buried with weapons, with swords only appearing in the most high-profile graves. Other items found in male graves included dress accessories, such as belt buckles and brooches (most commonly made from copper or bronze, but more precious metals are found in higher-status burials), as well as pottery for food, and other similar items possibly deemed necessary for an afterlife. However, low-status graves were often considerably less furnished, showing the differences in wealth between different levels of society. 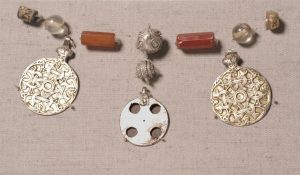 Female graves could also be very well furnished. Unlike those for men, they did not contain weapons. Instead, items such as loom weights and distaffs can be found, showing the industrial role women often played. They could also be buried with ornamental keys, seeming to represent the woman who carried them as the one in charge of the household, or at least the activities which took place there. As well as these items, women also are commonly found buried with dress accessories, perhaps most famously the distinctive Scandinavian oval brooches which were worn on each shoulder. Receptacles for food are also known from female graves.

A recent study of brooches by Oxford University researcher Jane Kershaw has revealed that following the creation of the Danelaw, the form of brooches a person wore was indicative of their chosen identity, either as more Anglo-Saxon or Scandinavian. Brooch finds are most common in East Anglia, seeming to show more of a trend for declaration of identity when closer to areas under Anglo-Saxon control. This case of identity is most prevalently seen in instances where a Scandinavian artistic style or form has been made with Anglo-Saxon style fittings, meaning that it was created somewhere in England, for use by an Anglo-Saxon wanting to use the Scandinavian fashion. 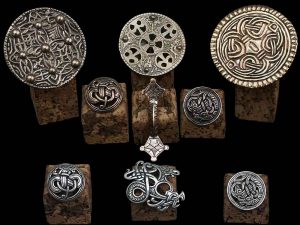 The most famous site for Scandinavian presence in England from the 9th century onwards is York, known to the Norse as Jorvik. Major excavations, particularly in the Coppergate area, have revealed extensive Scandinavian activity and settlement. Although the archaeological excavation did look back through 2000 years of history, its focus was on the Viking Age archaeology of York. The site is highly unusual in that there are up to 9 metres of archaeological layers, the majority of which date to the Viking Age. There is also the advantage that these layers are moist and peaty, meaning better preservation of organic material, so that many timbers from buildings have survived, but so have some textiles and even some leather shoes.

The site yielded a great number of finds, all allowing the interpretation of daily life for people in Jorvik. This includes: five tons of animal bones, which mostly seem to be food waste, although some were probably used in industrial contexts. There were also large numbers of oyster shells; Roman roof tiles, which were sometimes re-used in the Viking Age; woven wattles and timbers used for the construction of buildings and pathways; metal slag as a residue of industrial production; and in excess of a quarter of a million pieces of pottery, which can indicate both date and purpose of the vessels they were once a part of. These are just the more simple and common items, with 20,000 items deemed “individually interesting” also being uncovered, showing a huge amount of activity in York before, during and after Scandinavian settlement.