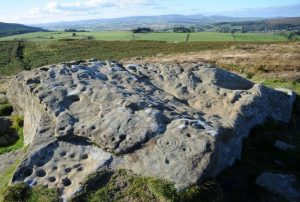 Trying to save Neolithic rock art made by our ancient ancestors is no easy task. But it tells us how people used to live. 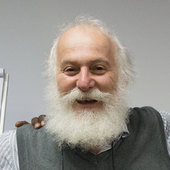 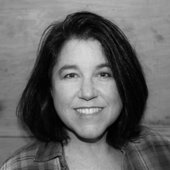 The British and Irish countryside is often celebrated for its wealth of unique places of heritage, significance and interest. But not many people know that this heritage includes thousands of ancient panels of neolithic art, which are usually found out in the open for anyone to see.

Known also as “cup and rings”, these rock carvings were made by our Neolithic and Early Bronze Age ancestors between 6,000 and 3,800 years ago. About 7,000 carved panels are known about – occurring mostly in England (3,500 panels) and Scotland (2,500 panels).

The carvings were usually made on open air outcrop rocks and boulders, but they have also been found in monuments and burial cairns. The carved panels vary from well-decorated massive outcrops to small cup-marked portable rocks.

Recently uncovered carved rocks have revealed that different types of pecking tools were used – from fine nail-like points to a broad chisel, and various sizes in between. To make the indentations, people back then probably used some sort of mallet to hammer the tools.

Signs of the past 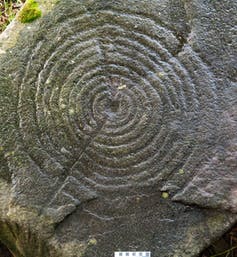 Ever since the carvings were recognised as ancient, people have wondered why they were made. Noting the link between cup marks and burials, in 1877 Canon Greenwell, a Victorian antiquarian and Church of England priest, suggested the markings “involved the deepest and most esoteric principle of the religion held by these people”.

Since then more ideas have been proposed, and in the 1970’s, Ronald Morris, a lawyer who did extensive recording of rock art in Scotland, listed 104 ideas he collected from other people in a bid to explain why ancient people made this type of art. He ranked these in order of plausibility – ideas he scored highly included burials and alignment markers.

Then in the 1990s, University of Reading archaeologist Richard Bradley suggested there was a link between the complexity of the carved designs and their position in the countryside. He claimed that rock carvings on higher ground were associated with a mobile pattern of obtaining food as they were at strategic places that overlooked grazing land. 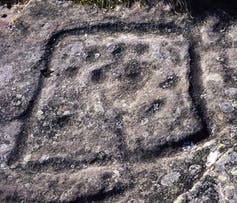 Also in the 1990s, British archaeologist Clive Waddington proposed that the beginning of carving was linked to a new relationship with the countryside as people changed from being hunter-gatherers to sheep or cattle farmers.

The carvings, he argued, were inspired by patterns occurring in nature – which acted to disguise the control people were beginning to exercise over the land. It was suggested that in time, the carvings were included in ceremonial monuments. And that this symbolically linked the past and present, merging old with new beliefs as people increased their control through farming.

While the true intentions or purpose behind the rock artists may never be fully known, what we do know is that around 6,000 years ago a Neolithic person picked up a hard stone tool and started pecking away on softer rock. It was the beginning of a process, which led to the creation of many thousands of open-air carvings across Britain and Ireland.

But being out in the open, these carvings are now under threat. These ancient artefacts are deteriorating primarily because of modern life – with increasing population densities, agricultural activity, and climate change all taking their toll. Indeed, in many places the rocks have been scratched by livestock, and driven over by cars, tractors or farming equipment. 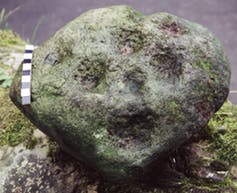 To understand the threats better, heritage and science researchers at Newcastle University and Queen’s University Belfast have studied 78 of the carved panels in 18 different places in England, Scotland and Ireland. As part of the research, we completed forms to monitor the condition of each panel and took about 180 soil samples and 800 portable X-ray fluorescence readings – a nondestructive technique that determines the elements in the rock.

Ongoing monitoring of the condition and threats to the panels has been recognised internationally as an important part of protecting rock art. But until now, this has always been done on paper, which is why we have developed the first ever app to monitor the condition of the carvings and the threats they face. 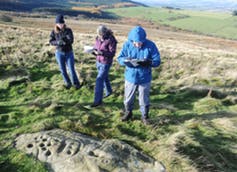 Members of the public completing a site monitoring form in the countryside. Author provided

The Rock Art care app allows members of the public to contribute to the protection of UK and Ireland’s open-air rock art by providing information about the condition of motifs and panels. Once uploaded, reports are made available to the project team, known custodians of rock art and heritage agencies.

It is hoped that by monitoring the rock art in this way, it can help to preserve it for future generations to enjoy. And while we can’t be sure about the thoughts and feelings of the people who made the carvings, it is hoped our neolithic ancestors would approve of the efforts being taken to try and ensure their art survives for many thousands of years to come.