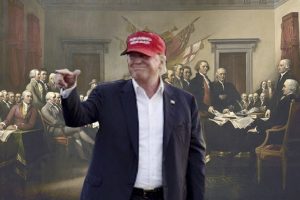 Recent speculation about the likely reactions of America’s Founding Fathers to Donald Trump miss an obvious point: the Founding Fathers would never have encountered a Donald Trump. They loathed and refused contact with demagogues and would have shunned Trump without giving him a single thought—let alone a second one.

Compared to the signers of the Declaration of Independence and Constitution—collectively called our “Founding Fathers”—Trump stands out as a semi-literate, with the limited vocabulary of a thuggish adolescent. He acquired his thin formal education at a second-tier military academy and at a business college that taught accounting and marketing—not statesmanship.

In contrast, the Founding Fathers were superbly educated men—American “gentlemen” who did not tolerate or associate with the likes of a Donald Trump. Many Founding Fathers had studied in prestigious English schools such as Eton and universities such as Oxford or Cambridge. Some had traveled to the Continent for further studies. They mingled with the western world’s leading intellectuals: Samuel Johnson, Edmund Burke, David Hume, Denis Diderot.

Those who, for whatever reasons, couldn’t travel to Britain for their higher education attended places like Harvard, as did John Hancock and John Adams. James Madison went to Princeton. Thomas Jefferson, James Monroe, and John Marshall all studied and earned law degrees at the College of William and Mary. John Witherspoon was president of Princeton when he signed the Declaration of Independence.

The signers of the Declaration of Independence and Constitution all studied Greek, Latin, French, logic, mathematics, science, the Bible, philosophy, geography, political science, history, and law. Harvard—certain that its graduates would lead the nation—emphasized rhetoric, “the art of speaking and writing with elegance.”

Of the Founding Fathers who didn’t or couldn’t attend college, most were passionate autodidacts, accumulating enormous libraries and acquiring on their own as much or more knowledge than their contemporaries who had attended college. Like Benjamin Franklin—and two centuries later, Harry Truman—George Washington was an obsessive autodidact, acquiring knowledge on his own of international affairs, political science, natural science, agriculture, literature, and law. Complementing his law books were more than fifty books on history—among others, Gibbon’s six-volume History of the Decline and Fall of the Roman Empire. His book shelves held more than sixty books on political science and economics, including well-worn copies of John Locke’s On Human Understanding and Adam Smith’s three-volume Inquiry into the Nature and Causes of the Wealth of Nations.

Like all Founding Fathers—and unlike Donald Trump—George Washington prepared himself to be a statesman—“versed in the principles or art of government,” according to Webster’s Dictionary. “One actively engaged in conducting the business of a government or in shaping its policies … one who exercises political leadership wisely and without narrow partisanship.”

Donald Trump prepared himself for real estate and casino operations, studying “Business Analytics” to understand “the enormous amount of data available to companies” and “Marketing”—to help him “bring innovative ideas to market.” “Operations Strategy” may have taught him how “to gain a competitive edge or even develop a new business model.”

Even as they fought for political independence from Britain’s King George III, the Founding Fathers all spoke the King’s English and referred to women as “ladies”—not as “dogs,” “slobs,” “fat pigs,” “bimbos,” “disgusting animals,” or other terms Trump has used to describe certain women. Fending off criticism from a women’s-magazine reporter for his offensive characterizations, Trump snapped, “It doesn’t matter what the media write as long as you’ve got a young and beautiful piece of ass.” Trump described his daughter to a national television audience as having “the best body” and opining, “If Ivanka weren’t my daughter, perhaps I’d be dating her.”

The Founding Fathers never spoke publicly or wrote of their own or others’ wives, daughters or any “ladies,” limiting any such references to the closings of personal correspondence. “I beg you,” Thomas Jefferson ended a letter to John Adams, “to present my most friendly respects to Mrs. Adams.”

George Washington’s words to Martha after their engagement in July 1758 display the respect Founding Fathers showed their “ladies”:

I embrace the opportunity to send a few words to one whose life is now inseparable from mine. Since that happy hour when we made our pledges to each other, my thoughts have been continually going to you as another Self. That an all-powerful Providence may keep us both in safety is the prayer of your ever faithful and affectionate friend.

Unlike the Founding Fathers, Trump has never served in public office. Washington, Patrick Henry, Thomas Jefferson, and other Founding Fathers considered public service an obligation to their nation. Most served in state legislatures before the Revolution, and eight signers of the Constitution were or had been state governors. Almost all Founding Fathers were successful entrepreneurs. Most northern signers such as John Hancock owned thriving merchant-banking houses, while southern signers such as Washington usually owned and oversaw enormous plantations. Indeed, Washington may have been history’s best prepared candidate for the American presidency. As Commander-in-Chief of the Continental Army, Washington proved a remarkable administrator, coordinating the recruitment, training, arming, feeding, clothing, and transport of as many as 25,000 men from thirteen different states and engineering the defeat of the world’s best trained, best equipped army.

As an entrepreneur before and after the Revolution, he transformed a relatively small tobacco plantation into a diversified agro-industrial enterprise stretching across 20,000 acres. His Mount Vernon estate included a fishery, meat-processing plant, textile and weaving plants, distillery, gristmill, a cargo-carrying schooner to carry plantation products overseas, and endless fields of grain, tobacco, fruits, and vegetables to supply his family’s needs and those of domestic and foreign markets. In addition, he acquired more than 100,000 acres across four states and the Ohio territory, reselling and leasing properties to hundreds of settlers.

Donald Trump runs golf courses, hotels, and casinos and drove four of them into bankruptcy.

The Founding Fathers pledged their “lives, fortunes, and sacred honor” creating our nation and ensuring its survival over the centuries that followed. Donald Trump refused to pledge his life when the nation was at war in 1968. Although he pledged his fortune last year to campaign for the presidency, he found it too costly and has now rescinded his pledge. And as for his sacred honor, Trump never had any to pledge.