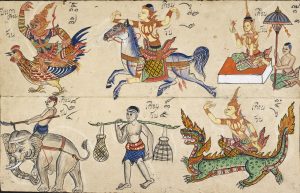 In traditional Thai culture, horoscopes and divination were used to establish the fate and future of people. 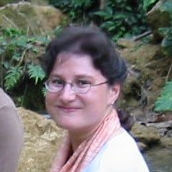 What was the purpose of horoscopes in Thai society?

In traditional Thai culture, horoscopes and divination were used to establish the fate and future of people. These were important methods to help people cope with the uncertainties of life and everyday challenges.

Divination specialists acquired knowledge that was secret to ordinary people, particularly on the perceived influences of stars, planets, numbers, plants, animals of the zodiac and divinities on the lives of humans. Certain constellations of day and time of birth with the stars, zodiac animals and guardian spirits of the birthplace, for example, could be interpreted as positive or negative influences in someone’s future life.

Before making important decisions – like choosing a partner, naming a newborn child, moving to a different place, starting a new business or choosing a profession – people would consult a divination specialist for advice.

Problems with health and wellbeing weren’t traditionally regarded as purely physical. In addition to medical treatment, people would search for the root of the problem elsewhere. A divination specialist would have been contacted to find out if there was, for example, an imbalance in someone’s social relationships or in the constellation of planets and stars, or if they had caused offence to guardian spirits of their souls or certain divinities. Divination specialists also helped people to interpret dreams and bad omens, putting people’s minds at rest. 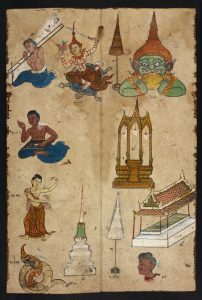 Phrommachat horoscope manual, 19th century: Folio with illustrations of omens for interpretation by a divination specialist. The image of a prisoner wearing a cangue means the person will enjoy fortune and prosperity first, but then trouble will come. Relatives may plan evil; even children, partners and servants cannot be trusted. Ill health may be caused by angry deities. / British Library, Public Domain

What are Thai horoscope manuals?

Horoscopes were often recorded in manuscripts. These are known as Phrommachat in Thailand; ‘phromma’ referring to Brahma, the creator god in Hinduism. This is an example of Thailand’s pre-Buddhist traditions being adopted from neighbouring countries, particularly the Khmer Empire.

The British Library holds several Thai horoscope manuals, which are all in the format of paper folding books with coloured illustrations and text in Thai.

One particular horoscope manual features illustrations of the 12 animals of the Thai zodiac. Each animal is accompanied by a female or a male ‘avatar’ (representing yin and yang) and a plant that houses the guardian spirit of the soul of the person born in the year of this animal.

What are the animals of the Thai zodiac and their meanings?

Thai people adapted the animals of the Chinese zodiac according to their own purposes and ideas. The principle of the 12-year lunar cycle, with each year represented by an animal, is still followed, only the Chinese dragon was replaced by a Buddhist nāga (serpent) in the Thai tradition.

You can use this chart to identify which animal your year of birth corresponds with. 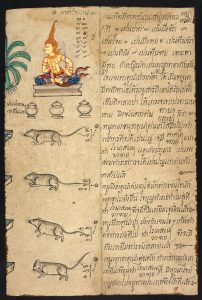 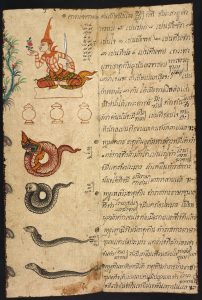 Phrommachat horoscope manual: The year of the nāga (water serpent), showing the male deity as the avatar, as well as a blossoming silk-cotton tree and four types of nāgas with four types of metals on the left edge of the page. / British Library, Public Domain 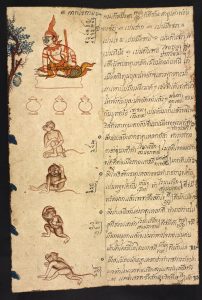 Phrommachat horoscope manual: The year of the monkey, showing the male demon as the avatar, as well as a jack tree, four types of monkeys and four types of metals on the left edge of the page. / British Library, Public Domain

Each of the years in the Thai zodiac is also associated with a certain story about Buddha’s former lives (Jatakas) and one of the Buddhist temples in Thailand which people born in a particular year should visit at least once during their lifetime. If you were facing any sort of misfortune in your life, a trip to the temple would have been strongly recommended.

How are Zodiac characteristics determined?

As well as the above characteristics of the years in the Thai zodiac, there are alterations and alternative interpretations depending on your month and day of birth.

Each year is divided into quarters, each of which is associated with a particular animal of the zodiac sign. For example, the 5th, 6th and 7th months in the year of the monkey are associated with an ‘excellent monkey’. Such people have a mild disposition, may not be very helpful to others but are able to develop.

The 8th, 9th and 10th months in the year of the monkey are associated with a forest monkey. Someone born in these months is faithful and good-hearted; they will succeed.

The mangrove monkey is associated with the 11th, 12th and 1st months in the year of the monkey, and people born at that time will are aggressive and will become wealthy.

The remaining three months are associated with the wind monkey, and people born in these months in the year of the monkey are hard to teach as children, but will have a good disposition and repute in later life.

Birth on a Sunday in the year of the monkey is associated with a monkey reared by a lord. Someone born on that day will be fortunate in life.

Monday is connected to a common monkey, and someone born on that day is likely to live in poverty.

Tuesday is associated with an imprisoned monkey. Born on that day in the year of the monkey, you can expect trouble and misfortunes.

Wednesday is the day of a monkey reared by a hermit. People born on that day are well informed and will live a good life.

Thursday is associated with a monkey brought up by a chief Brahmin (learned ceremonial master at the king’s court); someone born on this day is intelligent, clever and has great potential.

Friday is the day of an excellent monkey. People born on a Friday in the year of the monkey are very fortunate.

A chained monkey is associated with Saturday; people born on this day in the year of the monkey may experience suffering in their life.

Days and months together

There are even more complicated calculations by combining the numbers of months and days in order to give more detailed predictions which are shown below. 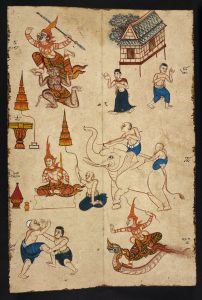 Someone born in the 5th or 11th month and on day 1 or 7 in the year of the monkey – represented by the demon riding on a monkey – is violent, a bad worker and poorly off.

People born in the 6th or 12th month and on day 2 – represented by a seated noble with an umbrella-bearer – will be lucky, have dignity and live happily.

Birth in the 7th or 1st months and on day 3 – represented by two men fighting – predicts trouble and difficulty making a living.

Someone born in the 8th or 2nd months and on day 4 – represented by a couple quarrelling – will be miserable and unsettled and have a sad married life.

Birth in the 9th or 3rd months and on day 5 – represented by a mahout riding on an elephant – means the person will be exhausted trying to attain rank and not find happiness.

People born in the 10th or 4th months and on day 6 – represented by a male deity riding on a serpent – are expected to be active minded, and although harsh-speaking, will hold positions of power.

How can you use the Thai zodiac for dream interpretation?

In addition to predictions related to the Thai zodiac, this manuscript contains explanations on how to interpret certain omens and signs that people may see in dreams. For example, dreaming about being murdered is regarded as a reverse omen and means that the person will gain wealth and defeat enemies.

If one sees a Buddha image or the sun in a dream, it is interpreted that the person will have power and authority over enemies.

Dreaming of seeing moonlight means there will be trouble with your partner, while a heart being torn out predicts the loss of a loved one.

Who should you marry?

Many aspects in Thai horoscope manuscripts deal with marital relationships and match-making. There are detailed explanations on which types of people are good or bad matches for marriage. 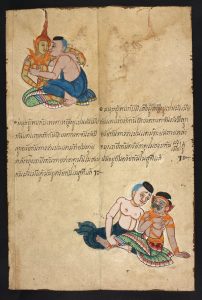 Shown in the image above is the combination of a male human with a woman who has the virtues of a deity. Such a couple will be blessed with children, but will argue and not be able to live happily together.

The same is predicted for a marriage between a male human with a woman of a demonic character like a yakkhini. They can marry and have children, but will not be able to live happily together.

Jana Igunma: When an angel meets a demon: Advice on love and relationships in a Thai divination manual. (7 January 2014)