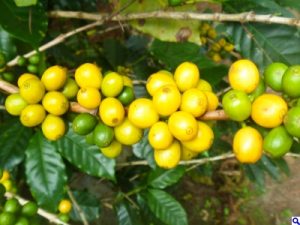 All the trials and tribulations of coffee picking are very fresh in my mind. In this column, I plan to share the When, What and How of coffee picking. The coffee picking season is the busiest time of all for a coffee farmer. It is a season of early mornings ferrying coffee pickers to and fro and evenings spent waiting in line at the beneficios the processing plant where the  coffee cherries are sold.

The “When” of Coffee Picking

In Panama we have a single harvest per year. Here in the Boquete Valley our coffee harvest runs from October through February with peak harvests varying depending upon altitude. Here there are some farms still producing in March, mostly at very high elevations. That said, volume is very small and the pickers are now asking nearly three times what they were being paid at the peak of the season. The last beneficios is closing at the end of this week, in the middle of March. Most of the Northern hemisphere Arabica coffee is on a similar schedule.

The “What” of Picking Coffee

It sounds so simple, pick only the ripe red cherries but this is really one of the most difficult things to achieve. Firstly, what is a ripe red cherry? Well, here in Panama it is a bright red cherry.  Some regions and coffee producers pick purple. We pick red.

To complicate matters further, yellow Catuai is very popular here. Yellow Catuai ripens yellow not red. So the final basket is not a clean red basket of cherries but contains both red and some ripe yellow ones as well.

The “How” of Picking Coffee

Yes, there is more than one way to pick a cherry. Although few farm owners have ever actually picked cherries themselves there are more opinions on this topic than anything else. This is one of the most challenging things for the owner of the farm. The owner wants a high quality pick, which fetches a higher price and tastes better in the cup. The custom is to pay coffee pickers by lata. A lata is a volume measurement but works out at approximately 30lbs of cherries. This year we have been paying $3 per lata, higher than ever before. If pickers are given an incentive to fill buckets then the tendency is to go as quickly as they can and they are not too selective in their picking. Quality is compromised.

A picker can pick between around 2-8 latas a day depending on how good they are. When I pick, I get closer to 2. Some of the Indigenous professionals regularly take much higher volumes.

As stated earlier, it is very tempting for the pickers to compromise quality and the plants to get volume. Here’s how we go about picking:

All this means that if you pay by volume, which is almost a pre-requisite for attracting pickers, you also need to supervise the job very closely. For each crew of pickers you need a foreman. Every day when the bags are being counted you need to inspect for quality and pay close attention to each pickers habits.

The end of the picking day is important and sometimes a lengthy affair. Everyone gathers to have their sacks measured and receive payment. Sometimes this is very complex. I had one day towards the end of the harvest when we were picking red and green cherries. Each lata of green was one price and red another. In both cases they were not round numbers. I had to find an enormous amount of silver change and one dollar and five dollar bills to make pay packets for each person on a team of 15 or more pickers. I needed a calculator as it was quite beyond anything I could work out on the back of an envelope. I had to prepare all this in advance.

It is important to pay attention to each pickers sacks, especially early in the season and anytime you have new pickers. Look at the quality and provide feedback as needed. Feedback to the pickers is important. Sometimes it may mean having to fire a picker if there are too many non-reds or damaged trees in their pickings on a consistent basis.

Hopefully this helps to explain the complexity behind bringing you the reddest, ripest cherries for your Specialty Coffee fix. I believe that in the future some things will have to change in the way coffee is picked in Specialty Coffee regions. The current way of paying by volume does not encourage quality. Migrant workers are not loyal to the farmer’s business nor are they  vested in the farmer’s strategy for quality. Speaking for myself, it is also all a bit stressful – telling folks to slow down and choose coffee cherries carefully while paying them by volume is exhausting.

Following is a short photo essay showing you different types of cherries including some picking errors. Apologies for some of the photos not being quite in focus! 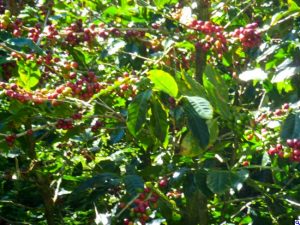 Tree in peak harvest / Here is one of our typical trees when the cherry are mostly at peak condition for harvesting. Note there are still many green cherries. 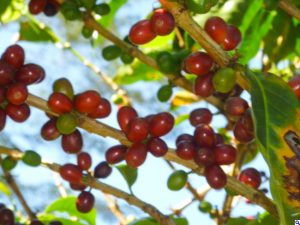 Mostly ripe whorls / Even the most ripe branches or whorls of cherry contain some green. 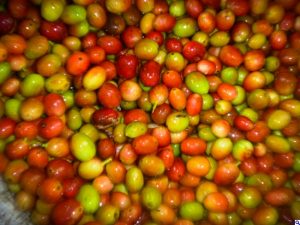 Rainy season picking / You can see there’s a mix here, including a lot of green splitting cherries 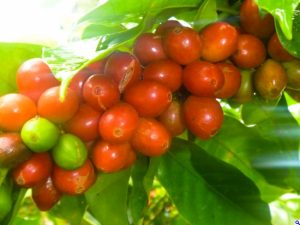 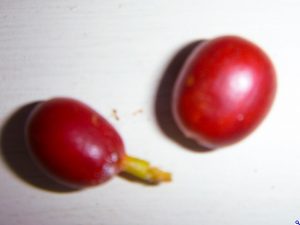 The Ngoble Indigenous coffee pickers of Central America are a fascinating people that was  almost completely destroyed by the Spanish invaders 500 years ago. An immensely strong and resilient people they live off the land and have a deep understanding of the natural world.