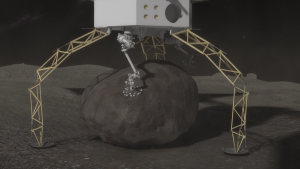 As part of the Asteroid Redirect Mission, NASA plans to send a robotic spacecraft to an asteroid tens of millions of miles away from Earth, capture a multi-ton boulder, and bring it to an orbit near the moon for future crew exploration. The mission, which will demonstrate multiple capabilities needed for the Journey to Mars, is targeted for launch in December 2021. / NASA

NASA will provide three virtual updates on two planned Asteroid Redirect Missions (ARM)   Wednesday, Sept. 14 at the agency’s Goddard Space Flight Center in Greenbelt, Maryland. NASA Television will provide coverage at 11 a.m. EDT of the first briefing to discuss ARM’s contributions to the Journey to Mars and protection of our planet.

ARM will demonstrate capabilities for future Mars-level exploration missions closer to home, and will fly missions with technologies and operational constraints the agency will encounter on the way to the Red Planet. It also will test techniques that might be used to divert a small asteroid, if one were identified and predicted to impact Earth in the future.

A full schedule of activities on Sept. 14, taking place in Goddard’s Robotic Operations Center, is as follows:

11 a.m. – What is the Asteroid Redirect Mission?
Senior leadership from the White House Office of Science and Technology Policy (OSTP) and NASA will discuss what ARM is, what the mission’s scientific and technological benefits are, how the mission will support the goal of sending humans to Mars in the 2030s, and how ARM will demonstrate technology relevant to defending Earth from potentially hazardous asteroids. The briefing will air live on NASA TV and the agency’s website. The participants are:

12 p.m. – ARM Industry and Community Update
Following the general briefing, NASA scientists and engineers will provide a technical update on the robotic mission, including recent progress, a new partnership opportunity for hosted payloads, a membership call to join the mission’s investigation team, an upcoming request for proposal on the robotic spacecraft, and more.

The technical briefing will stream live through Adobe Connect. The public and media are invited to watch the virtual update online, and submit questions throughout the event.

For more information, including how to participate in the briefing online, and an agenda, visit NASA’s ARM Virtual Industry Day webpage.

3 p.m. – Facebook Live Q&A
To round out the day, NASA will host a Facebook Live event to briefly describe the mission, take a virtual tour of the Robotic Operations Center at Goddard, and answer questions from social media about ARM. Ben Cichy, asteroid operations phase lead for the robotic ARM at Goddard, will participate in the question-and-answer session.

During the course of the two ARM missions, NASA will send a robotic spacecraft to an asteroid millions of miles in deep space to retrieve a multi-ton boulder and bring it to an orbit near Earth’s moon. An astronaut crew then will be launched aboard NASA’s Orion spacecraft and Space Launch System rocket to visit the boulder to collect the largest and most pristine sample of an asteroid ever retrieved for scientific study.

The dual missions will involve NASA’s first integrated robotic and crewed operations beyond the moon and validate capabilities such as the first use of large-scale solar electric propulsion (SEP) to move large masses in space, a capability that will be needed to send cargo to Mars. Crew members who visit the boulder will conduct multiple spacewalks for selection, extraction, containment and sample return. The asteroid sample could provide insight on the beginning of our solar system, and help scientists develop tools and techniques for resource extraction.

ARM also will be used to demonstrate an asteroid deflection technique called a gravity tractor, which is strongly supported by the planetary defense community. This technique may be a more efficient, gradual and predictable way to divert a potentially hazardous asteroid from colliding with Earth than other deflection concepts.

To learn more about the agency’s Journey to Mars, visit: