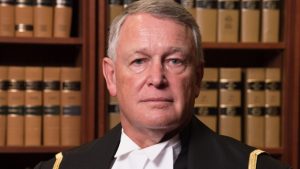 Rape culture is not just an American problem, but rather an international epidemic. The latest proof of this is a Canadian judge who is facing firing after he asked a rape victim in his courtroom a litany of appalling questions. He implied that she was at fault for the sexual assault rather than her attacker because, after all, she probably wanted to have sex anyway.

The allegations against Federal Court Justice Robin Camp are listed on the Canadian Judicial Council website. During the 2014 sexual assault trial, Camp reportedly asked the victim the following horrific question:

“Why couldn’t you just keep your knees together? Why didn’t you just sink your bottom down into the basin so he couldn’t penetrate you?”

He also reportedly told her that young women “want to have sex, particularly if they’re drunk.”

As if those comments weren’t disgusting enough, he also told the victim that “some sex and pain sometimes go together” and “that’s not necessarily a bad thing.”

The woman had accused Alexander Wagar of holding her over a sink and brutally raping her during a house party. In September 2014, Camp acquitted Wagar of all charges. The woman appealed and Camp’s ruling was overturned by the Alberta Court of Appeals and he is set for a new trial in November.

In November of 2015, the Canadian Judicial Council began investigating Camp after a complaint was filed against him by four law professors. As a result, Camp later recused himself from all sexual assault cases. Not long after, members of the public began filing complaints as well.

The Alberta attorney general filed a formal complaint against Camp in December and the matter was referred to “inquiry committee,” which consists of three judges and two lawyers. It will be up to this committee to decide if Camp will be removed from the bench.

The Houston Chronicle reports that “according to the notice of allegations, Camp’s ‘rude and derogatory’ comments ‘belittle(d) and trivialize(d) the nature of the allegations.’ He also made ‘stereotypical assumptions about how someone confronted with sexual assault would or would not behave.’”

CBC News reported that the woman said the judge’s abhorrent comments made her hate herself.

“He made me feel like I should have done something, like I was some kind of a slut,” she said.

Camp says he’s very sorry for his behavior and Frank Addario, his attorney, said he has  “consistently shown remorse” for berating the rape victim. Since then, he has reportedly tried “to educate himself and gain insight into his beliefs.”

Addario insists that Camp should not be removed from the bench because even though he made “insensitive and inappropriate” comments this can be “remedied by education.”

The Chronicle adds that Camp has since “gone through mentoring, counseling about how victims of abuse respond to trauma, and a crash course on the history and current state of sexual assault law.”

Camp, who grew up in South Africa, received degrees in commerce and law from the University of Stellenbosch but claims he never received any training in how to handle sexual assault cases. In Canada, his practice has mostly dealt with cases involving contractual, trust, oil and gas, and bankruptcy litigation.