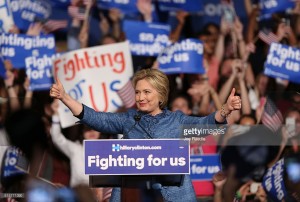 In a controversial tweet taken from a speech in Harlem this week, Hillary Clinton argued that “Some folks may have the luxury to hold out for the perfect. But a lot of Americans are hurting right now and they can’t wait for that.” Aside from its troubling implication that society’s worst off are damned to settle on sub-par candidates and policies, Clinton’s statement disregards the history of this country’s most transformative social movements.

The millions left unemployed by the Great Depression were hurting plenty, and they marched 10,000 strong to the capitol before rallying around the country — demanding relief from poverty considered politically impossible. Also hurting were the organizers of the black freedom movement, who — facing state and vigilante violence — made radical dents to Jim Crow, ending legal segregation across the United States.

The real question for 2016 is: Who can afford the status quo? There are small groups of people making out just fine under gaping racial and economic inequality, for whom supporting Clinton and the establishment politics she represents is a relatively safe bet. When it comes to climate change, though, the answer is literally no one.

Leading climate scientists couldn’t be clearer on this. As Justin Gillis reported for the New York Times yesterday, new research published in Nature has found that three-foot sea level rise —once thought to be hundreds or thousands of years off — could happen within decades, eviscerating all coastal cities. Rising tides, Gillis writes, would be “so high it would likely provoke a profound crisis within the lifetimes of children being born today.” New York City’s chances of surviving its next 400 years are “remote,” in line with risks faced by London, Hong Kong, Sydney and elsewhere.

The authors of this study, meanwhile, see a path out of near-certain destruction. Relaying scientists findings, Gillis writes that, “A far more stringent effort to limit emissions of greenhouse gases would stand a fairly good chance of saving West Antarctica from collapse.”

The problem is that the most ambitious international agreement to curb warming — announced at the U.N. climate negotiations in Paris last December — is woefully ill-equipped to deal such a blow to business as usual. In a best case scenario, where every nation signed on to the Paris Agreement fulfills all of its commitments, temperatures will still rise by at least 2.7 degrees Celsius — far more than the threshold we need to undershoot in order to avert global catastrophe.

Meanwhile, the settlement Clinton’s statement suggests is one taking place on the fossil fuel industry’s terms. As Greenpeace has pointed out, her 2016 campaign — via super PACs — has received some $4.5 million from fossil fuel lobbyists and large donors, and hundreds of thousands more from industry executives and their allies. Challenged on that point by a bird dogger this week, Clinton lost her usual campaign cool, berating a young activist to say, “I am so sick of the Sanders campaign lying about me.” The activist, notably, is not formally affiliated with the Sanders’ campaign.

“Luxury,” in the midst of the climate crisis, is survival. Although we all face a certain end from continued emissions, particular swaths of humanity are already particularly screwed. Unsurprisingly, those communities have also been the ones fighting back the strongest against warming and the fossil fuel interests driving it. Representatives from the Global South have consistently been the loudest voices calling for the stringent emissions reductions that science demands, chanting, “1.5 [degrees Celsius cap on warming] to survive” when walking out of the doomed U.N. climate negotiations in Copenhagen in 2009. In the United States, it was indigenous activists and ranchers who drove the fight against the “carbon bomb” Keystone XL pipeline, even as Clinton continued to push for it from her post in the State Department.

A lot of Americans are hurting right now, and they stand to hurt even more if fossil fuel companies get their way. Fortunately, the climate justice movement isn’t holding out for anyone.