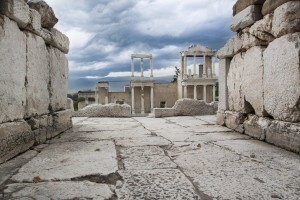 The Antiquity Amphitheater might be the most famous of Plovdiv’s numerous impressive archaeological monuments. Photo: Old Plovdiv Municipal Institute

Possibly the most famous cultural landmark of the southern Bulgarian city of Plovdiv, its well preserved Antiquity Amphitheater, will be renovated as part of a project which also provides for exhibiting in situ archaeological structures under its stage.

Plovdiv Municipality has started a tender worth BGN 200,000 (app. EUR 100,000) under Bulgaria’s Public Procurement Act for the overhaul of the stage of the Antiquity Amphitheater.

Its project provides for restoring and exhibiting the level under the stage of the Amphitheater, and for rebuilding the stage itself. Applications for the tender are due by May 9, 2016.

The stage of the Antiquity Amphitheater was last repaired in 2006, exactly 10 years ago.

Out of Plovdiv Municipality’s funding, a total of BGN 40,000 will be provided for the further excavation of the city’s Roman Forum whose ruins are located under the modern-day central square. The other BGN 150,000 will be distributed among the projects for the Nebet Tepe Fortress and settlement, the 5th century AD Great Basilica, and the excavations of a huge Ancient Thracian burial mound near the town of Manole.

Bulgaria’s Plovdiv boasts a myriad of archaeological, historical, and cultural monuments. For example, thanks to the prehistoric, ancient, and medieval settlement and fortress of Nebet Tepe, Plovdiv hold the title of “Europe’s oldest city” (and that of the world’s six oldest city, according to a Daily Telegraph ranking).

The history of the southern Bulgarian city of Plovdiv – often dubbed the oldest city in Europe – began with the human settlement on the ancient hill of Nebet Tepe (“tepe” is the Turkishword for “hill”), one of the seven historic hills where Plovdiv was founded and developed in prehistoric and ancient times.

During the Early Antiquity periodEumolpia / Pulpudeva grew to encompass the two nearby hills (Dzhambaz Tepe and Taxim Tepe known together with Nebet Tepe as “The Three Hills”) as well, with the oldest settlement on Nebet Tepe becoming the citadel of the city acropolis.

In 342 BC, the Thracian city of Eumolpia / Pulpudeva was conquered by King Philip II of Macedon renaming the city to Philippopolis. Philippopolis developed further as a major urban center during the Hellenistic period after the collapse of Alexander the Great’s Empire.

In the 1st century AD, more precisely in 46 AD, Ancient Thrace was annexed by the Roman Empire making Philippopolis the major city in the Ancient Roman province of Thrace. This is the period when the city expanded further into the plain around The Three Hills which is why it was also known as Trimontium (“the three hills”).

Today the prehistoric, ancient, and medieval settlement on Nebet Tepe has been recognized as the Nebet Tepe Archaeological Preserve. Some of the unique archaeological finds from Nebet Tepe include an ancient secret tunnel which, according to legends, was used by Apostle Paul (even though it has been dated to the reign of Byzantine Emperor Justinian I the Great (r. 527-565 AD)) and large scale water storage reservoirs used during sieges, one of them with an impressive volume of 300,000 liters. Still preserved today are parts of the western fortress wall with a rectangular tower from the Antiquity period.