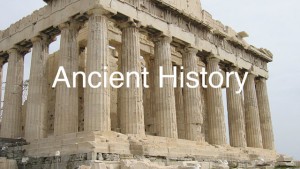 “It’s a warm evening in ancient Greece” – Jim Parsons as Sheldon Cooper at “The Big Bang Theory”, his regular line 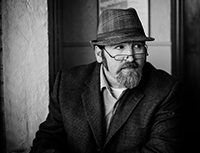 The ancient world, the period between approximately 3500 BCE and 500 CE (dating back to early written records) – why bother with studying it?  Why take the time to learn about places and events from so long ago?

My answer is because we can’t help it.

Everything that we do, every profession and ideology, is likely to have its roots in antiquity.  Everything we have been and have become and will be –

It all starts in the ancient world.

Many medieval, early modern, and modern history teachers give at least a passing nod to the ancient Romans, Greeks and Egyptians. You have all gotten here because of the ancients – not because of aliens in a flying saucer that brought us to this planet, aliens that put all the books and learning into our libraries. Our culture – our history – is our own. It wasn’t transplanted here by some ancient astronauts. You should always be conscious of the fact that you are here because the ancients got you this far – ancient Mesopotamians, Egyptians, Greeks, and Romans.

One question that seems to stump many people when really challenged for more than a canned (and almost always wrong) answer is, “How do you define history?”

Some define it simply as the past. Some say everything that has happened since the Earth was formed. But iff that’s true, then define PREhistory. Many people are shocked to hear that the study of history does not include the study of prehistory, though that study is in itself important for any historian.  But its specialization calls for another discipline, the worlds of archaeology and various sciences such as geology.

Not just the past, but recorded events of the past – this gets to the heart of the matter of what history is all about. History is not simply the past or the study of it. It depends a great deal on the recorded events of the past. History is an activity. When the Greeks invented the word history in the 5th century BCE, it was both a noun and a verb. The Greek used “historetto” (I history). It doesn’t mean “I am history,” but instead, “I do history” – an action.

So what is history? The past no longer exists in a direct way that we can observe – it is done, over. We can only study it indirectly. We study artifacts and historical evidence. The past must be inferred – it cannot be observed. We must make educated, calculated guesses. As opposed to archaeologists, historians have a preference for a particular kind of surviving evidence – written evidence.

So what is history?

History is the study of surviving evidence (preferably written) from which we infer the past.

The reason we prefer written evidence is because it takes us directly into the minds of the people and events we study. It reveals a great deal more to us than their material culture – their artifacts. We often don’t find written evidence, in which case we must rely on archaeological evidence – those surviving artifacts. Would that it were so that we had a complete record of all events. But we don’t have a complete written record any single event. It’s not possible. We can only infer from what is written, but even the author doesn’t record every single detail of an event. All that survives for historians is a sample of a sample of a sample of a sample and so forth. The more time that goes by, the less that remains.  This is the principle of diminishing returns. We are constantly short of the evidence we would like to have. When ti comes to the study of the ancient world – there has been a lot of time for the remaining samples to continually diminish. 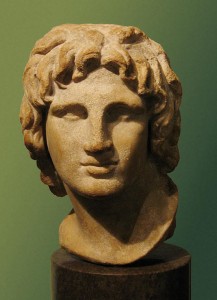 Bust of a Young Alexander the Great from the Hellenistic Era, 2nd-1st Century BCE / Creative Commons

Twenty-four of Alexander the Great’s closest companions wrote elaborate accounts of what it was like to serve under that king. Alexander maintained a treasury where records were produced and stored – land requisitions, taxes, etc. None of this has survived. We know these things were written because they were consulted by historians in the later Roman period. They took a big sample and made it into a smaller sample. We are constantly dealing with the problem of having few, if any, remaining samples. Often when asked questions we have to say we don’t know the answers or can only provide educated guesses because we no longer have the evidence required to provide accurate answers.

On the northern border between Afghanistan and the former Soviet Socialist Republic of Tajikistan was a tiny place between two rivers, a magnificent Greek city, in Afghanistan. It had a great theater that could seat 6,000 patrons, a huge palace complex, temples, shrines, a gymnasium, etc. It is no longer there. An Afghan king on a royal hunt looked down upon the area and thought there had to have been a city in the location because the features of the land were obviously not natural. The discovery of decayed remains were excavated to uncover the city, and we can reconstruct it based upon that. We have the sample of a sample of a sample of a sample left from which we can do that. In the palace was a treasury in which was found a tablet with text on it – the thing historians want, written evidence. The text was Greek. It was a single page left of the entire library – ever smaller samples to even this. The text was actually dried ink that had been transferred to a stone tablet from the paper that sat on it. A gust of wind came along and blew the dried ink away – the paper was gone by this time. A picture of the tablet was taken just before this happened. Had they not done so, we would not have even that sample today. We know this city was suddenly abandoned around 146 BCE. We know the departure was hasty because they left behind many valuable items in the treasury – silk, gold, coins, etc. The city was overtaken probably by nomadic invaders from the north. 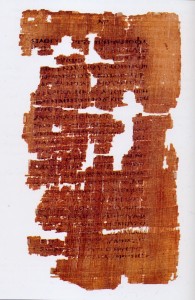 The past is a puzzle with pieces always missing. The Gnostic Gospels represent a different branch of early Christianity that we didn’t know existed until finding their documents. This caused rethinking the development of Christianity. Whole archives of documents from ancient Egypt have been discovered because they survived there better than anywhere else.

There are primarily four types of sources – epigraphy, numismatics, papyrology and archaeology. 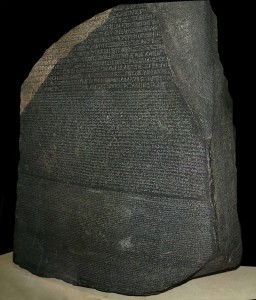 Epigraphy involves documents normally inscribed on stone. Tombstones are a still modern example. Stones tend to survive, and epigraphy thus provides a great deal of information. We’re very fortunate that many ancient societies carved their tomes and law codes into stone so that we can read them now.

Numismatics is the study of coins. Coins don’t change much in our society today, but they were the major means of mass communication in the ancient world. A king/emperor used information stamped on coins to spread messages far and wide. Ancients put tons of information on coins – I call them disks of information technology crammed with information. Like stone, they tend to survive and provide valuable evidence. Almost everything we knows about the ancient city discovered above we know from their coins. 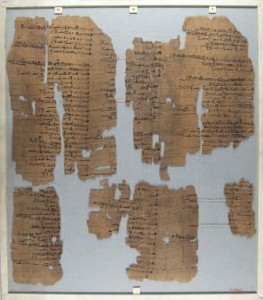 Papyrology is the study of documents written on papyri – marsh plants found particularly along the Nile and pounded in criss-cross form to dry in the sun and be used as paper. It survives rarely except in Egypt which has an extremely dry and preservative climate. We have thousands of papyrus documents from ancient Egypt. 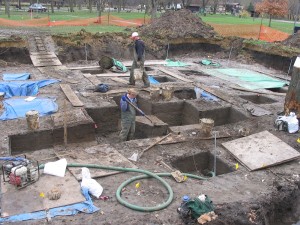 Archaeology is of course the excavation and analysis of surviving material remains. These are our major sources for studying the ancient world.

The passage of time is not the only reason that things don’t survive from the ancient world.  It is obvious that much will be lost over the course of thousands of years, but there is also the unrelenting procreation of people. It began to rise dramatically 500 years ago. The people built roads, buildings, and more on top of ancient cities that can no longer be studied because they’ve been made inaccessible and often destroyed.

Historians control the past, and we have an obligation to make sure that people have a proper understanding of it. Historians could go rogue and rewrite the past to determine what the future will be – some have and still do. Bad history will destroy a civilization. You must be able to study and understand history yourself.

Our most significant invention could have been many things, but not fire. We didn’t invent fire – we harnessed it. The wheel, writing, money, tools, houses, clothes, and more – these are human inventions, and most of those things that remain important have been handed down to us from the ancient world.

We’re never far from where we were.