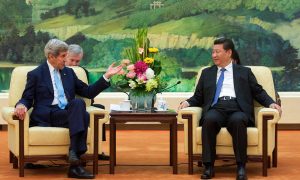 By Dr. Neville Morley / 11.02.2016
Professor of Classics and Ancient History
University of Exeter

‘My work,’ claimed the ancient Athenian writer Thucydides, ‘was written as a possession for all time, not a piece of entertainment for the moment.’ Because of ‘the human thing’ – to anthropinon in Greek, a phrase similar to ‘human nature’ but rather looser – events tend to be repeated in more or less similar ways. Therefore, Thucydides argued, his account of the war between the Athenians and the Spartans would not only be informative about past events, but useful in understanding the present and future as well.

Although few today would endorse Thucydides’ view that the Peloponnesian War was the greatest event in human history, the idea that his account has lasting relevance and importance beyond the war is widely accepted. This explains why he is one of the most cited classical authors, evoked in media discussions of topics as varied as the Brexit vote, the Greek economic crisis, the Russian annexation of Crimea and, most persistently in recent years, the tensions between the United States and China, in the form of the so-called ‘Thucydides Trap’. Thucydides is perceived as someone who has looked beneath the chaos and confusion of events to understand what’s really going on. His reputation inspires trust and belief as W H Auden suggested at the outbreak of the Second World War (‘Exiled Thucydides knew…’).

The claim that Thucydides’ account of the past is useful is often extended to historiography in general, rather than just to his specific – and idiosyncratic – approach. But widespread acceptance of Thucydides’ authority disguises the fact that his approach to the past, and to the lessons that can be drawn from it, can be understood in very different ways, with radically different implications for modern history. For some readers, it establishes the value of accumulating knowledge about the past, and the endless varieties and complexities of human behaviour in different contexts, as an end in itself. For others, focused on Thucydides’ claims about ‘the human thing’ as a historical constant that shapes events, it underpins the project of deriving wider principles and laws of human behaviour from the data of the past.

The latest iteration of the latter view comes from the Harvard academics Graham Allison and Niall Ferguson, who argue in The Atlantic for the establishment of a presidential council of historical advisers, and suggest that its charter should ‘begin with Thucydides’ observation that “the events of future history… will be of the same nature – or nearly so – as the history of the past, so long as men are men”’. US policymakers, they argue, too often live in the ‘United States of Amnesia’, with sometimes catastrophic consequences. It’s time for them to start listening to historians as well as to economists – and for historians to develop a new discipline of applied history so that they are in a position to offer the right kinds of advice as soon as the president sees sense and appoints full-time historical advisers, suitably remunerated, with a professional support staff.

Historians have feared the obsolescence and irrelevance of their discipline for at least half a century – a theme that’s become more prominent in the past few years – and have quietly resented the influence of (in their eyes) the reductionist, simplistic and, above all, short-termist social sciences. ‘Editorials apply economic models to sumo wrestlers and palaeolithic anthropology to customs of dating,’ complained Jo Guldi and David Armitage in their History Manifesto of 2014. ‘These lessons are repeated on the news, and their proponents are elevated to the status of public intellectuals. Their rules seem to point to unchanging levers that govern our world.’ Allison and Ferguson likewise object to the ‘spurious certainty’ offered by social scientists. Presidents, they argue, should base their decisions on evidence drawn from reality – the lessons of the Great Depression, John F Kennedy’s handling of the Cuban missile crisis or the 50-odd ‘brutal, fanatical and purpose-driven’ groups that the historical record offers as possible analogues to ISIS – rather than abstract, supposedly timeless economic or political theories.

Historical research shows how things change over time. The past was different from the present, so there is no reason to imagine that our present condition will be indefinitely extended into the future. History reveals the enormous variety and variability of human institutions and behaviour, setting clear limits on the validity and plausibility of any universalising generalisations. The problem for any would-be applied historian lies in converting this necessary corrective of over-confident social-scientific assertions or politicians’ simplistic assumptions – the historian’s reflex ‘actually, it’s rather more complicated than that’ – into anything resembling the sort of practical policy advice that politicians or civil servants will ever take seriously.

The classic British example of a mismatch between historians’ professional caution and policymakers’ demands for clarity and simplicity remains the meeting organised in 1990 to advise Margaret Thatcher on the prospect of German reunification. Experts such as Norman Stone, Fritz Stern and Timothy Garton Ash sought to outline the key events of modern German history in order to contextualise the situation – and faced constant demands for definitive statements about ‘the German character’ and whether ‘Germans’ could be trusted. Nuance and ambiguity are clearly regarded as an impediment to decision-making but they are the stock-in trade of the historian.

Allison and Ferguson implicitly recognise this problem. Their case for putting historians at the heart of government opens with recent examples of historical ignorance and naïve assumptions, about Islam, Iraq and Russia, which led to unnecessary mistakes; better knowledge of history would have revealed the complexity of those situations and, presumably, encouraged greater caution. But their claim for the usefulness of history is much stronger, as it has to be in order to win the ear of power: the past can, they argue, furnish effective and illuminating analogues for current problems, from which applied historians can identify likely outcomes and suggest policy interventions.

As they observe, ‘historical analogies are easy to get wrong’, and too many ‘amateur analogies’ already pervade discussions of contemporary affairs. People have a clear tendency to find themselves and their situation in the past. However, it is not clear what the essential difference could be between ‘amateur’ and professional analogies, beyond the status of the person claiming to have identified them. In either case, the effectiveness of the analogy depends on emphasising the resemblances between past and present, and setting aside or explaining away the differences – all while trying to argue that rival examples (there are always many other possibilities to be found) are much less relevant.

The past is not a neutral body of data, objectively coded so that events can be matched to one another for analytical purposes. Rather, it is always the product of a process of interpretation and representation. Some events are more familiar than others and come pre-loaded with meaning, which is why Nazi analogies are so popular and so invariably unhelpful. Though professional historians can draw on a wider range of potential examples, with a great deal more detail and complexity, much then has to be stripped away in order to make the analogy persuasive, and more persuasive than other analogies. Is Donald Trump Mussolini, Nero, Alcibiades or George Wallace? Do US commitments to Japan and the Philippines more closely resemble the 1839 treaty governing the neutrality of Belgium or the early years of the Delian League?

One possible answer is: yes and no. Any historical example will present both similarity and difference to the present, and reflecting on both these aspects can give us a better understanding of our own situation and its possibilities for good and ill. (Potentially, at least; I remain skeptical that Thucydides could ‘explain’ Trump). We can use the example to think with, without having to claim that it is somehow objectively more relevant than other pieces of the past, or that it embodies any invariant universal principle. There’s a case to be made that this was Thucydides’ intention for his work. He certainly doesn’t offer the sorts of explicit, universal laws of political behaviour and inter-state relations that many of his modern readers claim to identify, but nor does he present an account of events for their own sake, irrelevant to the present.

Rather, Thucydides invites us to compare the events he describes with our own situation, and presents them in a way that confronts us with the complexity and unpredictability of the world. His narrative is driven not by abstract and inhuman laws but by the deliberations and decisions of people, and so by the power of rhetoric, the rhetoric of power, and human susceptibility to emotion and self-delusion. Far from endorsing a search for simplistic historical analogies as a basis for policy recommendations, Thucydides would most likely regard this habit as further evidence of our limited capabilities for self-knowledge, deliberation and anticipation – another facet of the ‘human thing’ that leads us to make similar mistakes again and again.