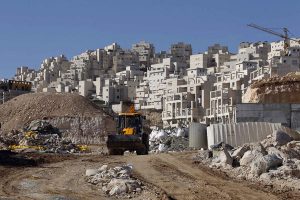 Israel’s settlement policy in the West Bank has been called benign by Israelis and a tragic roadblock to a 2 state peace agreement. I will try to illustrate why settlements have been a deliberate Israeli policy to prevent a viable Palestinian state. First lets examine Jerusalem which Israel claims as it’s undivided capital. Most people think of Jerusalem as the area surrounding the Western Wall and the Temple Mount plus the modern urban area of West Jerusalem. In the map below that is the area outlined by yellow lines. 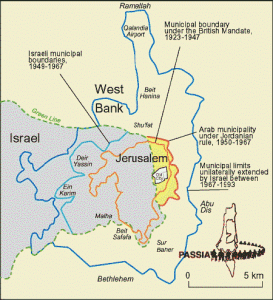 However, Israel has been expanding Jerusalem’s municipal boundaries for years and now are outlined by the dark blue lines. This is the area Israel considers its undivided capital leaving no room for Palestinians to part of an area just outside the yellow line as their capital in what was traditional Arab East Jerusalem. This expansion of Jerusalem was done not only to annex part of the traditional west bank but also extend the municipal lines north to the city limits of Ramallah and south to the city limits of Bethlehem to prevent those two cities from encroaching closer to traditional Jerusalem.

This tactic of assigning huge municipal territory to an Israeli town or settlement extends to other west bank Israeli towns. Take for example, Maale Adumim a settlement just outside the expanded Jerusalem city limits. Over the years it has grown to a population of 40,000 and bills are in the Knesset to expand Jerusalem’s borders to include this city. 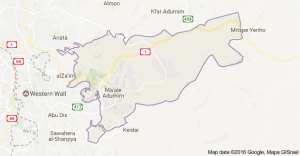 The light green area next to the town’s name is the current built up area. However, you can see the purple line represents the municipal borders of the town extending all the way west to the town of Jericho in the Jordan Valley. Some of you have probably heard about the fight between the U.S and Israel over the building in the E-1 corridor( the main highway through this area) which would effectively cut the Northern West Bank from the South. Similar expanded Israeli settlements consist of the Ariel, Eli, Shiloh corridor which cuts the northern West Bank in two and the settlement of Kiryat Arba next door to Hebron.

People who claim that the settlements are not a real problem because they can either be abandoned or left in the West Bank as part of the Palestinian state subject to Palestinian laws and taxes the same way Palestinians in Israel proper are treated. People who claim this have obviously never met an Israeli settler or traveled in the West Bank. Take for example Maale Adumim, a modern city and it’s 40,000 residents is not going anywhere. Similarly Ariel, a modern city deep in the West Bank has 20,000 residents and an additional 10,000 at it’s University. The Gush Etzion block of settlements between Bethlehem and Hebron consists of 22 cities and villages of Jewish settlers totaling 65,000 residents is not going to be abandoned by Israel under any circumstances.

Settlements like Kiryat Arba, Bat Ayin, Itamar and many others are populated by radical religious settlers who will fight to the death to follow their dream of the Biblical Greater Israel of King David. In all three of these settlements, the residents are heavily armed with grenades, morters, heavy machine guns etc. conveniently and “accidently” left there by sympathetic IDF. A war where Jews killed Jews is unthinkable in Israel so these settlements are going no where and these settlers will never accede to Palestinian control or taxes.

Collectively Israel has established 147 recognized settlements in the West Bank territory including East Jerusalem with a population of 650,000 Jews. The task of moving these people back into Israel proper is almost impossible. Think of depopulating a city like Seattle – how do you do it and where would you put them. Israeli Jews will not subject themselves to Palestinian rule –ever. So either Israel takes on the impossible task of moving that many people or leave them in the West Bank subject to Israeli law thus leaving the Palestinian state as a swiss cheese country, lots of holes and not much cheese.