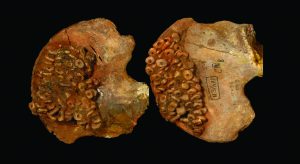 Ivory beads and ochre—affixed to the pelvic bones of a child—likely decorated the burial clothing of this 10-year-old interred at Sunghir some 34,000 years ago. / E. Trinkaus/Trinkaus and Buzhilova/Antiquity

An ancient interment site in Russia challenges us to rethink how Paleolithic humans in Europe treated their dead and organized their societies. 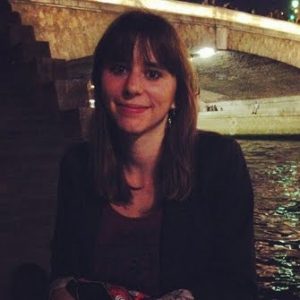 Around 34,000 years ago, hunter-gatherers who roamed the Russian plains started to bury their dead at the site of Sunghir, about 200 kilometers east of what is today Moscow.

Now considered one of the most iconic Upper Paleolithic sites in Europe, Sunghir was initially discovered in 1955 while it was a quarry. After careful excavations from 1957 to 1977 uncovered 30,000- to 34,000-year-old remains, the site has never ceased to fascinate archaeologists. The mortuary site contains extremely elaborate burials of an adult male covered in beads and ochre (a red clay earth pigment), and a juvenile and an adolescent, approximately 10 and 12 years old, buried head to head.

This photo montage shows the highly decorated remains of a 35- to 45-year-old adult male who was buried at Sunghir. / K. Gavrilov/Trinkaus and Buzhilova/Antiquity

“Sunghir is the earliest example we have in Europe of very elaborate Homo sapiens burials,” says Natasha Reynolds, an archaeologist at the University of Bordeaux in France, who specializes in the European Upper Paleolithic. “It is the first point in time where we see these complex mortuary behaviors reflected in the European archaeological record.”

Exploring this complexity and the diverse ways with which these ancient people seemed to have thought about and treated their dead at Sunghir could open a new window into the complex social world of some of the first Homo sapiens in Europe.

Over the last 60 years, the remains of at least 10 individuals have been discovered at Sunghir, though some of the bones have been lost in the intervening years.

In a recent study published in the journal Antiquity, researchers pooled all of the data available about the remains at Sunghir. The team provides the most complete description to date of the humans interred and the objects recovered at the site.

The male adult covered in beads and ochre was between 35 and 45 years of age when he died. Bioarchaeological analysis suggests he might have sustained a sudden death, probably due to an incision in his neck. While his grave—which contains about 3,000 mammoth ivory beads, pierced fox canines, and ivory armbands—is stunning, that of the juvenile and the adolescent is even more so. In addition to beads and ochre, carefully manufactured mammoth ivory spears, ivory disks, and pierced cervid antlers were found with the skeletons.

Yet these extravagant burials are only part of the reason why Sunghir stands out in the archaeological record. The research now suggests that the site is characterized by a much greater diversity of mortuary behaviors than archaeologists previously thought.

While an adult femur shaft was found in the grave with the two youngsters, another femur bone was discovered isolated near the graves, with indications that the body had been abandoned on the surface without receiving any formal treatment. A cranium, the first human bone to be discovered at the site in 1964, was found with artifacts just above the adult’s lavish grave. Although this cranium represents only one part of the skeleton, it appears to have been deposited there in the context of a funerary ritual.

These analyses have led the authors to conclude that at least three different forms of burials were practiced at Sunghir. 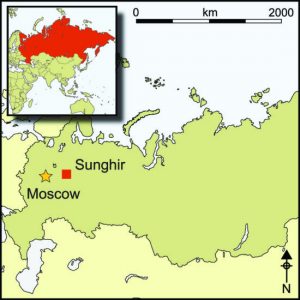 The Sunghir site east of Moscow is one of the oldest known interments of modern humans in Europe. / Trinkaus and Buzhilova/Antiquity

“What’s impressive here is that diverse mortuary behaviors we see across Europe at this time all come together at Sunghir,” says lead author Erik Trinkaus, who is based at Washington University in St. Louis, Missouri.

Radiocarbon dating suggests that these different burials date back to the same period. Early on in the Upper Paleolithic, these ancient people embraced a range of mortuary behaviors across a limited span of time. This finding challenges us to see that these modern humans may have had rich beliefs about death and about how the deceased should be treated.

The contrast between lavish burials and isolated skeletal elements at the site also suggests that there was some kind of differentiation between individuals during their lifetimes that was then reflected in death. Although it is not clear what the social structure of these people looked like or how it was determined, the evidence at Sunghir suggests that individuals didn’t necessarily acquire a status through their actions. Something else may have determined their position within their communities and how they were eventually treated in death.

The double burial is telling in this respect. The spears would have taken time to produce, and they had high utilitarian value. The probability that these young individuals would have accumulated enough status in their lifetimes to be buried with such valuable objects is low.

Sunghir may thus be considered as the earliest modern human burial site in Europe with evidence of a social structure that would not have solely depended on people’s acquired status. 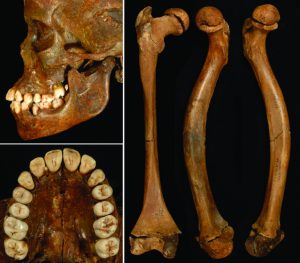 The elaborately buried youngsters at Sunghir bear evidence of physical abnormalities: On the left, a protrusion of the upper jaw is clearly visible on the facial structure of the 12-year-old, but there are no traces of abrasion on the dentition. In the photo on the right, the femurs from the 10-year-old are shown to be curved and unusually short. / E. Trinkaus/Trinkaus and Buzhilova/Antiquity

Both the juvenile and the adolescent appear to have suffered from physical abnormalities. Although no diagnosis has been established so far, it’s likely that their disabilities would have been visible to others. Their difference may have been part of the reason they were given an extravagant burial.

This idea of an association between pathological traits and unique mortuary rituals during the Upper Paleolithic is not new. For a little over a decade now, archaeologists have found mounting evidence of this connection all over Europe, suggesting that such individuals had a unique position.

“These elaborate burials should not be seen as the standard way people were putting their loved ones to rest—they are odd,” says Paul Pettitt, professor of Paleolithic archaeology at Durham University in the U.K. The ornate interments may be interpreted as displays of ritual acts that were practiced on rare occasions for individuals who had stood out due to the way they looked, behaved, or died.

The efforts to bestow distinction in death and the range of burial treatments are “powerful testaments to the complexity and humanity of our ancestors,” says Reynolds. “It suggests something really complex is going on in terms of the worldviews of the people who were living there.”