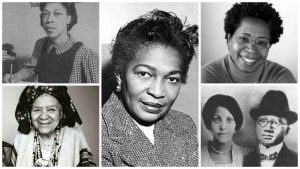 Examining the significant contributions of women and the dynamics of gender at the 1956 Congress of Black Writers and Artists in Paris.

The First International Congress of Black Writers and Artists, held from September 19-22, 1956 at the Sorbonne in Paris, was one of the most significant gatherings of black intellectuals during the twentieth century. Considered a “cultural Bandung,” the congress remains a landmark event in the history of black internationalism. Organized by Présence africaine, the publishing house and nexus of the black community in Paris, the Congress featured such speakers as Richard Wright, Léopold Senghor, Aimé Césaire, and Frantz Fanon.

In a photograph of the delegates–sixty-three, representing twenty-four countries–one notes the  presence of a figure seated in the front row. She is the only woman, yet in nearly all of the places in which this photo appears, her name is never mentioned.

What are we to make of this silence, or perhaps, this omission?  In researching the intellectual history of the 1956 congress and the Présence africaine group, further silences emerge. Founded in 1947, the magazine Présence africaine (later expanding into a publishing house) grew into one of the foremost postwar voices of diaspora, and developed an anti-colonial Pan-Africanism with an emphasis on the connection between culture and politics. Underpinned by Négritude, Présence africaine’s cultural projects embodied the Pan-Africanist tradition of seeking the “restoration of African subjectivity.”

Although women were involved from the start, scholarship on Présence africaine has not examined their roles. Women were absent from the podium those four days in September, and no contributions from them were sought in an edition of the journal devoted to the congress. Silence and absence, however, are ultimately misleading words to describe the visible participation of women in the activities of Présence africaine. It is rather the gap between the evidence of their participation and its acknowledgment that more accurately captures this history.

Planning for the congress had begun in 1955, inspired by the Bandung Conference. Josephine Baker served on its nineteen-person organizing committee, and although her involvement may have been honorary, it does not diminish its political significance. Baker would continue to lend her profile to publicize the Pan-African initiatives of Présence africaine, including the Second Congress of Black Writers and Artists in 1959 and the First World Festival of Black Artistsin 1966. In fact, Baker’s FBI files document her involvement with Présence africaine, whose politics was under investigation by the US. Baker’s engagement indicates her ongoing performances of a different sort, that of politics, and one which recent scholarship has illuminated.

While Baker’s role may have been symbolic, women were also directly involved in the congress’s planning. Christiane Yandé Diop, wife of Alioune Diop, the founder of Présence africaine, shared the congress responsibilities with fellow co-organizers. Christiane’s deep investment in Présence africaine was such that in 1980 upon her husband’s death, she took over leadership of the publishing house. Similarly, further photographic evidence is suggestive of women’s participation in the congress. A caption to one photo of Aimé Césaire surrounded by a group of three African women reads, “Aimé Césaire in the company of African students come to assist at the First International Congress of Black Writers and Artists.”

Furthermore, women are not entirely absent from the congress’s written record. Although no women served as delegates, one written message of support was included in the published volume on the congress. Signed only as “A Group of Black Women,” the message reads, “In an event as important for the Black World as this Congress, we could not remain simple observers, because we believe that the Black Woman has had and will have an important and weighty role to play alongside men in the building of his country.”

While even this cursory gloss of the historical record demonstrates that “simple observers” black women were not, their story within the larger narrative of the Pan-Africanism of Présence africaine remains one punctuated by gaps. Richard Wright was the only contemporary who remarked upon this gap in his address:

I don’t know how many of you have noticed it – there have been no women functioning vitally and responsibly upon this platform helping to mold and mobilize our thoughts. This is not a criticism of the conference, it is not a criticism of anyone, it is a criticism that I heap upon ourselves collectively… In our struggle for freedom, against great odds, we cannot afford to ignore one half of our manpower, that is, the force of women and their active collaboration. Black men will not be free until their women are free.

While Wright’s comments are remarkable for their awareness, they are equally evocative of the discourse in operation at the congress that might have enabled the obscuring of women’s involvement. The overt language of “manpower” in the political and cultural vision of the black future is only one example of many. James Baldwin, who covered the congress in an article for Encounter, concluded his ruminations on the basis of black solidarity thus, “What, in sum, black men held in common was their ache to come into the world as men.” Baldwin’s articulation of black diasporic solidarity was neither racial, political, nor cultural, but a fraternal bond between masculine subjects. As Hazel Carby demonstrated, the discourse of “race men” – a masculinity that is both taken to stand for black humanity and invoked to resolve racial crises – historically has had the effect excluding women from its visions of liberation.

Moreover, political discourse at the congress employed a familiar trope in the vocabulary of nationalism; the masculine state and the feminized nation or subject. The message from black women reflects this in its use of “his country” instead of “our country”; not to mention frequent invocations of “Mother Africa” by delegates. Additionally, the women’s’ message indicates a gendered division of political labor, as they defined women’s political contributions in terms of their vocations as mothers: “Indeed, the Black Woman assumes in her family a moral leadership that it would be wrong to overlook at this moment when the Black World is re-evaluating its culture.” While the various layers of this discourse cannot be unpacked here, even these few examples demonstrate the ways in which it might have circumscribed the participation of women.

The full history of women’s involvement in the activities of Présence africaine is yet a story haltingly told, but it serves as a reminder of the critical work necessary in telling the history of Pan-Africanism and women: moving between seeking their inclusion as well as interrogating gaps and silences. Uncovering the histories of women’s activism does not make the historian’s task “simply the recovery of previously ignored facts,” but one of offering new interpretations of what counts as intellectual and political labor, and therefore questioning the very categories themselves.

Incorporating women into the history of Présence africaine not only restores a fuller portrait of the maison d’édition, but can problematize our understandings of its Pan-Africanism. If Présence africaine’s lasting significance was that it “sought to make an intervention in the name of the absent presence of an as yet unexamined and unheard African voice,” then how does our perception of this project shift when we consider the unheard voices at the congress? How would we have to reinterpret the “poetics of anticolonialism” espoused in the journal, often expressed through the masculinized language of state-building? What would a closer investigation into the different traditions of activism (Caribbean, African, African American) among the women of Présence africaine reveal? More broadly, how can we understand the shifting politics of Pan-Africanism if we consider the way in which Amy Ashwood Garvey carved a platform for women at the 1945 Pan-African Congress, for example, while women nearly a decade later at the 1956 Congrès did not?

To return to the photograph of the delegates, a webpage in one of those far-flung corners of the internet identified the woman as Marie-Rose Clara Perez, the wife of Jean Price-Mars, the famed Haitian activist and chair of the 1956 congress.  As of yet, there is no other evidence to corroborate this, and I am still searching to learn more about this unnamed figure. Yet her presence in this photo compels us to ask more about the role women occupied in this historic gathering in Paris. It is also a reminder that we can be so trained to search for race men that we can, quite literally, miss the race women sitting before our very eyes.

Originally published by Arcade: Literature, the Humanities, and the World under a under the Creative Commons Attribution-NonCommercial-ShareAlike 3.0 United States license.