The Battle of Waterloo, by William Sadler / Wikimedia Commons

A “damned near-run thing” said the Duke of Wellington on his victory over Napoleon at Waterloo on 18 June 1815. The Battle of Waterloo was the the bloody finale of the French Emperor’s 100-day reign. While Napoleon was exiled to the island of Saint Helena dying shortly after in 1821, Wellington achieved heroic status in Britain: he had successfully stopped Napoleon’s bid for power, which started in 1792 with the French Revolutionary wars. 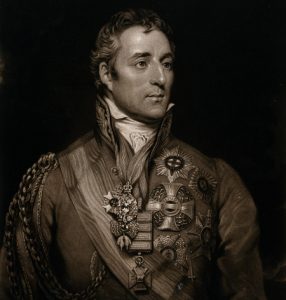 The Library digitised 17 watercolour drawings of patients treated by the surgeon Charles Bell from the Royal Army Medical Corps (RAMC) archive.  These drawings are from a set of 45 that Bell recorded in his sketchbook during the campaign – some of the watercolours were later worked up into life-size versions and used by Bell as illustrations in his lectures when he became Professor of Surgery at the University of Edinburgh in 1836. 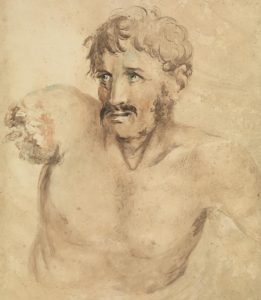 An accomplished surgeon and artist, Bell’s portraits of his patients describe not just their wounds and lacerations with anatomical accuracy but also their utter desolate, shocked or agonised expressions post-treatment, 10 or 12 days after injury.

Letters to Bell from surgeons who were subsequently in charge of the patients and later descriptions relating to the patients in the images highlight the grisly situation of many patients. Surgeons witnessed wounds of the liver, bladder and head and in some cases worse scenarios. One surgeon wrote: “Capt Campbell was my only death, I would not be permitted to open the body … he died spitting pus and with a liver morosely distended”.

Most wounds were caused by gun-shot, but occasionally sabres (a curved sword) were to blame, particularly among the French prisoners at Antwerp according to Bell’s graphic evidence. Not surprisingly the impact of these curved swords was vicious – one man was brought into the hospital “insensible” with a portion of bone hanging precariously. “None of the soldiers knew him” and he made “painful efforts to speak”. Bell advised “the isolated piece to be taken away and the integuments to be preserved”, an operation that “considerably relieved” his symptoms the day after but did not prevent the patient losing his memory altogether (Longmore, 1866). 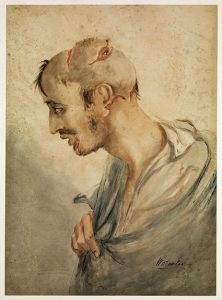 Lances or bayonets inflicted punctured wounds; cannon balls or pieces of bombs inflicted lacerated wounds and often resulted in lost limbs; musket balls much larger than a modern day bullet inflicted gunshot wounds that lodged inside the body or tore straight through making them difficult to heal. Worse still were gaping grapeshot wounds that were caused by a bag of musketballs set on iron rings resulting in a super-sized shotgun blast. Inevitably haemorrhaging was common in all patients, sometimes with fatal consequences. 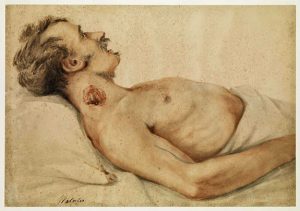 Many of the wounded French were left to perish on the battlefield after losing the battle – Bell was required to operate on many of them spending 8 days from dawn till early morning treating them. With 50,000 or so men left lying dead or wounded, unavoidably there were too few medical officers in attendance to treat them and it took days to clear the area. Only 270 surgeons were employed to treat the injured, few of whom were experienced, resulting in cases of ‘sugar loaf stumps‘, an amputation that is performed too close to the bone causing a conical stump which is difficult to heal.

As “one of the few surgeons to acknowledge the trauma he suffered”,  Bell’s experiences left him “drained” and prey to a “gloomy, uncomfortable view of human nature” for some time after (Stanley, 2003). Judging by the graphic evidence, this is no surprise. The original watercolour sketches are at the Army Medical Services Museum along with the rest of the RAMC archive, but the digitised versions offer us all a revealing insight into the medical aspect of the Battle of Waterloo.