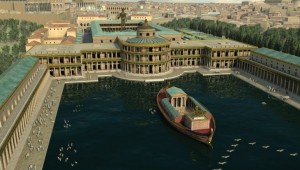 Beyond the ambit of military triumphs, the Romans were known for both their architectural and engineering prowess. And sometimes such scopes of expertise even reached obsessive and (we daresay) ‘decadent’ levels. The Domus Aurea (or Golden House) aptly harks back to this progress of Roman building skills in terms of excessive magnificence. Designed as a large landscaped portico villa, the expansive project (patronized by Emperor Nero) was started in 64 AD, after the Great Fire of Rome had destroyed many of the aristocratic and civic buildings – especially on the slopes of the Palatine Hill. Given such ‘extremes’ of circumstances and results, Altair4 Multimedia has given a go at reconstructing the entire monumental structure with the use of some fascinating 3D rendering techniques.

This animated video mainly deals with the magnificent external features of the Domus Aurea. The latter part of the video superimposes the Colosseum on the water body that flanked the ‘villa’ on one side. This is because the massive amphitheater was rather built on a site that previously catered to Nero’s artificial lake by his Golden house.

The second animated video gives us a quick tour through the ritzy interiors of the Domus Aurea. And we move to the last part of the video, it curiously shows flower petals being showered from the rooftop. For more information on that interesting ‘feature’, please refer to the third point in the article below. 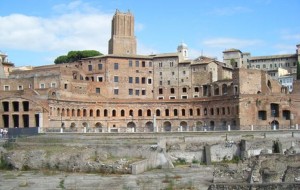 It is pretty safe to assess that Domus Aurea wouldn’t have existed if the Great Fire of Rome didn’t occur on the night between 18th and 19th July in the year 64 AD. How so? Well, as we fleetingly mentioned earlier, the fire managed to destroy many grand buildings inside Rome, while at the same time ‘clearing the way’ along large city zones for future construction projects. Now, obviously this had lead many to accuse Nero of starting the fire, as he would have gained some leverage over the real-estate situation of the capital.

But many of these allegations are seemingly unsubstantiated – mainly because the original fire started on the other side of the Palatine Hill, almost a kilometer away from where the founding stone of Domus Aurea was laid. Furthermore, parts of Nero’s own palace – Domus Transitoria, was destroyed by the engulfing flames. Historically, he was quite fond of this abode, and even proceeded on to salvage many of the marble works that were later used inside Domus Aurea. Lastly, the reasoning behind foul play being involved can be made moot – since the fire started only two days after a full-moon, which would have made the task of identifying the arsonists very easy.

What is So ‘Golden’ about this House? 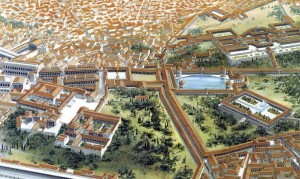 Constructed of brick and concrete, the imposing Domus Aurea (or the ‘Golden House’) was built between the period of 64 – 68 AD. The very name is derived from the facade components of the building that were overlaid with gold leaf, along with complementary embellishments of rare gems and seashells. The ostentatious scale was however not just limited to these exterior facades. The two-storied Roman villa also incorporated stuccoed ceilings that were embedded with semi-precious stones and ivory veneers. These were accompanied by walls with grandiosely conceived frescoes and over 140 rooms with variant thematic elements (and 11-m high ceilings). For example, the so-called ‘Golden Vault’ flaunted its gilded ceiling, marble panels and a scene from Greek Mythology involving the abduction of Ganymede by Zeus.

Suffice it to say, the entire Domus Aurea complex covered an extensive area – and it supposedly encompassed parts of the Palatine, Esquiline and Caelian hills. This huge compound bolstered by a man-made lake, is estimated to have had anarea of 985 ft length by 295 ft width – which is equivalent of more than five American football fields! As Gaius Suetonius Tranquillus, a Roman historian who wrote during early 2nd century AD, mentioned how the villa complex pertained to ‘rus in urbe‘ (or ‘countryside in the city’) with its idyllic incorporation of tree groves, vineyards, an artificial lake, and even pastures of land with animal flocks.

The Rotating Room and Flower Petals 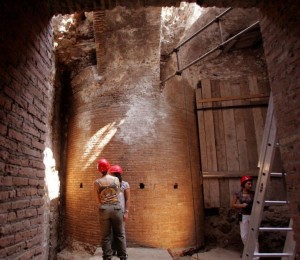 In one of Suetonius’ description of the Domus Aurea, this is how the passage goes –

A huge statue of Nero, 120 feet high, stood in the entrance hall; and the pillared arcade ran for a whole mile. An enormous pool, more like a sea than a pool, was surrounded by buildings made to resemble cities and by a landscape garden consisting of plowed fields, vineyards, pastures and woodlands. Here every variety of domestic and wild animal roamed about. Parts of the house were overlaid with gold and studded with precious stones and mother of pearl. All the dining rooms had ceilings of fretted ivory, the panels of which could slide back and let a rain of flowers, or of perfume from hidden sprinklers, fall on his guests. The main dining room was circular, and its roof revolved slowly, day and night, in time with the sky. Sea water, or sulfur water, was always on tap in the baths.

Now, if we gloss over the last part of the passage, we would encounter what can be described as a peculiar specimen of Domus Aurea architecture that relates to a room with a revolving roof. Many historians believe this space probably had a rotating wooden floor (instead of a roof) that moved in respect to a fixed ceiling that was painted with astronomical details of stars. This rotating mechanism might have been powered by the momentum of water. Now archaeologically speaking, in 2014, researchers did come across a robust pillar-supported circular room within the ancient villa – and this could have been the very same room mentioned by Suetonius. 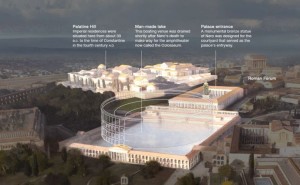 While the Colosseum (or Amphitheatrum Flavium – as it was originally known) was probably funded by the spoils taken forcibly from the Second Jewish Temple in Jerusalem, this massive amphitheater was built on the site of the aforementioned artificial lake surrounding the Domus Aurea complex. This was certainly a symbolic move on the part of its patron Emperor Vespasian, who wanted a building for the Roman public – as opposed to the supposedly decadent personal projects undertaken by his predecessor Nero.

However, in a turn of events, the very name Colosseum comes from the 100-ft high ‘colossal’ statue of Nero that was situated along the original gateway to the Domus Aurea. According to most historians, this name was ascribed to the amphitheater by 10th century AD, thus leaving behind the original moniker of Amphitheatrum Flavium. Simply put, the original part of the Domus Aurea still survived through Nero’s humongous sculpture – since Vespasian had only replaced the head of Nero’s high gilt-bronze statue with that of Apollo (and his solar crown), instead of completely destroying the imposing artwork. Unfortunately, the colossal specimen had possibly been toppled by the later middle ages, only leaving behind its pedestal whose foundations can still be viewed.