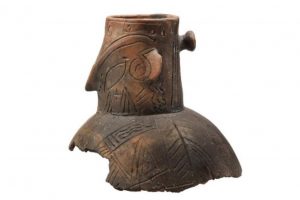 Anthropomorphic vessels depicting the Great Goddess with a bun hairstyle are the only ones of their type worldwide. Photo: Stara Zagora Regional Museum of History

5,000 BC prehistoric depictions of the “Great Goddess Wearing Her Hair in a Bun”, which were discovered in a Late Neolithic shrine in Southern Bulgaria in 2012-2013, have been unveiled to the public for the first time together with numerous other anthropomorphic vessels “of an unknown type”.

The Late Neolithic finds have been showcased in an exhibition in the Regional Museum of History in Bulgaria’s Stara Zagora in an exhibition entitled “The Shrine of the Great Goddess with the Hair Bun”.

The prehistoric vessels, figurines, and other artifacts were found in large Late Neolithic religious complex close to the town of Kapitan Andreevo, Svilengrad Municipality, near Bulgaria’s border with Turkey, and had not been made public until the opening of the exhibition.

The “Great Goddess with Hair in a Bun” vessels and the other finds which have been unveiled are dated back to 5,200 – 4,600 BC, even though during their excavations, the archaeological team came across a total of 482 different structures dating back from the Late Neolithic to the Middle Ages (11th century AD). The discoveries was made on a plot with an area of 600 square meters.

The prehistoric artifacts and the shrine belonged to agriculturalists and stockbreeders who inhabited the Maritsa River Valley in today’s Southern Bulgaria (also known as the Upper Thracian Valley) at the very end of the Neolithic and the Early Chalcolithic.

The 2012-2013 excavations near Bulgaria’s Kapitan Andreevo were rescue digs carried out during the construction of the Maritsa Highway connecting Sofia and Istanbul. The excavations were funded by the World Bank.

The discoveries were made by a team led by Prof. Vasil Nikolov and Assist. Prof. Victoria Petrova, with Tanya Hristova and Peter Leshtakov as their deputies, all of them archaeologists from the National Institute and Museum of Archaeology in Sofia.

“For the first time, we are showing the finds from an exceptional discovery in European Prehistory, namely, the shrine found near Kapitan Andreevo in 2012-2013. This huge complex is still under research but since we have a new type of archaeological monument in Balkan Prehistory, we’ve decided to showcase it to the public precisely in its complexity, and all of its beauty,” lead archaeologist Vasil Nikolov told BTA before the opening of the exhibition, which took place on December 15, 2016. 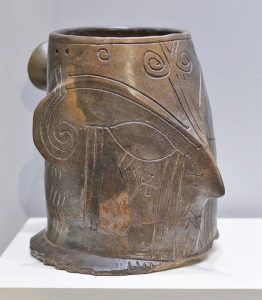 Numerous crushed anthropomorphic vessels from ca. 5,000 BC have been found in the ritual pits at the shrine near Kapitan Andreevo. Photos: Haskovo.info 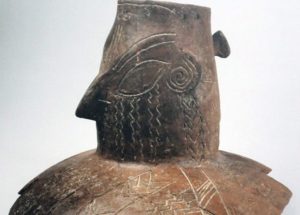 “These are the traces from the ritual activities of the agriculturalists and livestock breeders from the Maritsa Valley. What we have discovered is a shrine with a diameter of about 600 meters surrounded with two concentric moats, with a shrine building, with a material culture which in some ways we are seeing for the first time, and, I should emphasize, ceramic vessels depicting the Great Goddess [with] images that have no analogy neither in Western Asia, nor in Europe,” Nikolov elaborates.

“It was precisely this great importance of this monument that led us to organize this exhibition, I stress that, for the first time,” he adds.

He has also dubbed the prehistoric religious complex a “pit shrine” because after the religious rites were performed on platforms at the shrine building, the prehistoric people would lay crushed anthropomorphic vessels and figurines in pits of varying depth all around the main building in honor of the Mother Goddess and ask her for fertility.

Probably the most impressive of all artifacts from the prehistoric shrine near Bulgaria’s Kapitan Andreevo are the anthropomorphic vessels of the “Great Goddess Wearing Her Hair in a Bun”.

The image is very intriguing because it is noted that mortal women seem to not have been allowed to wear their hair in a bun, and especially because no similar image of a goddess with a bun hairstyle has been discovered anywhere in the world.

Another very impressive artifact from the Late Neolithic shrine near Bulgaria’s Kapitan Andreevo is a vessel in the shape of a bull ridden by a woman, that is, the Mother Goddess.

The figurine has been interpreted as a manifestation of the root of the myth of Europa and her abduction by Zeus who had turned himself into a white bull.

While the myth about Zeus and Europa has been widely known from the Ancient Greek mythology, the discovery of the vessel figurine from the end of the 6th millennium BC might be an indication of its inception during much earlier period in what is today the geographic region of Thrace in Southern Bulgaria, Nikolov notes, as cited by local news site Haskovo.info. 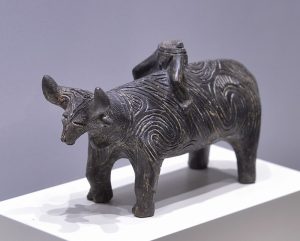 This 7,000-year-old depiction of the Mother Goddess riding a bull might have to do with the origin of the Zeus and Europa myth known from the Greek mythology. Photo: archaeologist Peter Leshtakov / Stariyat Most

“For the first time, I see [in one place] everything that we have researched [at the prehistoric shrine]. This is the first time we are showing these materials from this prehistoric pit shrine. Several years ago, we didn’t know of the existence of such monuments. In 2006, we were excavating another settlement along the Maritsa Highway, and we established that this was a new type of archaeological monument in Southeast Europe. When we started the excavations at Kapitan Andreevo, we also didn’t know what it was but later we found out that was the largest [prehistoric] ritual complex to have been excavated so far in Southeast Europe,” Nikolov has stated at the opening of the “Great Goddess with Hair in a Bun” exhibition.

“Do you realize the wealth that is inside these windows? This is [worth] more than a treasure, more than gold because it represents the human spirit,” Bulgaria’s Deputy Minister of Culture Boni Petrunova, also an archaeologist, has declared in turn.

Petrunova promised to recommend that the prehistoric artifacts from the “Great Goddess with Hair in a Bun” exhibition be exhibited in the Bulgarian cultural centers in Europe during Bulgaria’s holding of the rotating EU Presidency in the first half of 2018.

The “Great Goddess with Hair in a Bun” Exhibition can be viewed in the Stara Zagora Regional Museum of History from December 15, 2016, until January 15, 2017.

A wide range of prehistoric vessels have been at the Late Neolithic shrine near Bulgaria’s Kapitan Andreevo. Photo: TV grab from Zagoranews