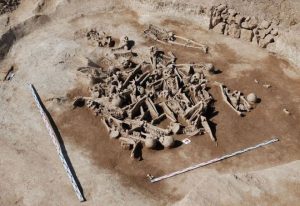 A mass burial of battle victims from the Xiongnu period in Mongolia. The Xiongnu warriors are linked to the nomadic people who would later become known as the Huns. Photo: BBC News

The Justinian Plague of 541 – 542 AD, which may have killed up to 25 million people, likely originated in Asia, not Egypt, and is linked to the migrations of the Huns, a new study has found.

The Justinian Plague, named after Byzantine (Eastern Roman) Emperor Justinian I the Great (r. 527 – 565 AD), affected Byzantium, and especially its capital Constantinople and other Mediterranean ports, as well as the Sassanid Empire.

Its contemporaries believed that what was one of the deadliest plague pandemics of all time had originated in Egypt. Byzantine Emperor Justinian I himself is said to have caught the plague but to have recovered.

Now a team of scientists including Eske Willerslev, Peter de Barros Damgaard, and others, say the Justinian Plague may be linked to the westward migrations of the Huns in the Eurasian steppe, reports BBC News citing their paper in the journal Nature.

The finding comes from analysis of DNA found in 137 human skeletons unearthed on the Eurasian steppe, including a mass burial of battle victims from the Xiongnu period in Mongolia.

The scientists describe how they sequenced genomes from these individuals. In two of them, they recovered DNA from a strain of plague related to the one responsible for the Justinian Plague.

The Eurasian steppe region covers a vast area, spanning some 8,000 kilometers from Northeast China to Hungary in Central Europe. The large sample of individuals covers a date range of 2,500 BC – 1,500 AD.

The outbreak of the Justinian Plague in Constantinople, today’s Istanbul in Turkey, was thought to have been carried to the city by rats on grain ships arriving from Egypt.

Yet, the new research has concluded that an origin in Central and Eastern Asia was more likely – despite the fact that the Justinian Plague had also spread to Northeast Africa.

The researchers say the plague probably moved westward with the migration of tribes who would become known to Roman chroniclers as the Huns.

The Huns were not one people but formed from diverse nomadic groups such as the Scythians and the Xiongnu who forged allegiances to extend their power and territory.

The Scythians were known to the Romans and Greeks as proficient horsemen living on the border between Europe and Asia. The Xiongnu are first attested further east, and fought a bloody war with the forces of China of the Han dynasty.

“In some of these Huns, we find the basic form of the Justinian Plague… that killed off millions of people in Europe,” says study co-author Eske Willerslev, from the University of Copenhagen.

DNA from a strain of the plague bacterium (Yersinia pestis) closely related to the one involved in the Justinian pandemic was found in a Hun individual from the Tian Shan mountains of Central Asia who died around 200 AD.

This Tian Shan strain is also more “basal” than the Justinian form of the plague, meaning it is further back in the plague’s genetic “family tree”.

A relative of the Justinian Plague strain also turned up in an individual from North Ossetia, Russia, whose age is more uncertain, but who probably died between the 6th and 9th centuries AD.

The Huns probably began their westward movement in the 2nd or 3rd century BC, and appeared on the borders of the Roman Empire in the 4th century.

Subsequently, they briefly dominated Europe. They are popularly associated with Attila the Hun, the Hunnic leader who fought numerous military campaigns against the Roman Empire.

“Our strain dates back to [around] 200 AD, so several hundreds of years before the Justinian plague wreaked Europe,” study co-author Peter de Barros Damgaard has told BBC News.

“An appearance has also been found in Egypt. As such, increased interaction under the Hunnic and later the Turk Khaganate would have aided in bringing this plague strain through the Silk Road. Intensified trade is a very likely factor,” he elaborates.

DNA analysis of this plague strain shows it possessed mutations that would have allowed its transmission via fleas, much like the later Black Death.

Nonetheless, it remains unknown if this was the principal mode of spread of the Justinian Plague in the 6th century AD outbreak.

“An interesting speculation is that Xiongnu warriors are documented through ancient Chinese historical sources to have used biological warfare by putting dead horse bodies in water sources,” Damgaard points out.

“I like to speculate that this would have been the breeding ground for plague, and once again the human trajectory would have been linked to horses, but I have no way of proving that,” the scientist adds.

Another paper in same edition of the Nature journal describes the discovery of hepatitis B strains in ancient people from the Eurasian Steppe. The study is also led by Eske Willerslev.

It reports the oldest evidence of hepatitis B viruses (HBV) in humans. The findings come from viral sequences recovered from 12 ancient people on the steppe.

“People have tried to unravel the history of HBV for decades – this study transforms our understanding of the virus and proves it affected people as far back as the Bronze Age,” says Barbara Mühlemann, a co-author from the University of Cambridge, UK.

“We have also shown that it is possible to recover viral sequences from samples of this age which will have much wider scientific implications,” she says.

It is noted that in 2015, some 257 million people were estimated to be infected with HBV; some 887,000 died due to complications such as liver cancer.