At Ebbsfleet, in northeast Kent, archaeologists have finally uncovered the site where JuliusCaesar’s fleet landed in 54 BCE 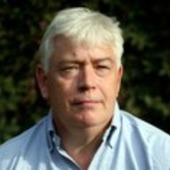 During the nine-year-long Battle for Gaul, Julius Caesar fought his way across northwest Europe. He invaded Britain twice; in 55BC, and again in 54BC. But while archaeologists have found evidence of the war in France, there has been very little discovered in Britain – until now.

At a site called Ebbsfleet, in northeast Kent, my colleagues from the University of Leicester and I finally uncovered the site where Julius Caesar’s fleet landed in 54BC. A series of surveys and excavations, spanning from 2015 to 2017, revealed a large enclosure, defended by a ditch five metres wide and two metres deep. 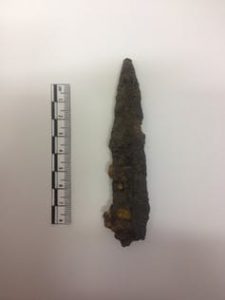 What a find: pilum tip from Ebbsfleet. University of Leicester, Author provided

We dated the ditch all the way back to the first century BC, by examining the pottery and using radiocarbon dating techniques.

At the bottom of the ditch, we found the tip of an iron weapon, which was later identified as a Roman spear, or “pilum”. Similar weapons were discovered at the site of Alésia in France, where the decisive encounter in the Battle for Gaul took place. What’s more, the defensive ditches at Alésia are the same size and shape as those we discovered at Ebbsfleet.

In Caesar’s own words

Our dig was situated next to Pegwell Bay, a large, sandy beach with chalk cliffs at its northern end. This striking landscape also helps to confirm that we really have found the location of Caesar’s base. Most of what is known about Caesar’s voyage comes from his own written accounts, based on his annual reports to the Roman senate.

When the Roman fleet set sail from France, they intended to use the wind to help them cross the Channel to find a large, safe place to lay anchor and prepare for battle. But the wind dropped, and the fleet was carried too far northeast by the tide. 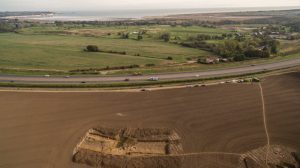 We came, we saw, we excavated. University of Leicester., Author provided

At sunrise, Caesar saw Britain “left afar on the port side”. Only high land would have been visible from a small ship far out at sea. And the only such land in northeast Kent are the cliffs near Ebbsfleet. Caesar also describes how he left the ships riding at anchor next to a “sandy, open shore” – a perfect description of Pegwell Bay.

Given Caesar’s own words seem so clear, it’s surprising that Pegwell Bay has never been considered as a possible landing site before. Instead, Caesar was long thought to have landed at Walmer, 15 kilometres to the south. One reason might be that, until the Middle Ages, Thanet was an island.

The Isle of Thanet was separated from the mainland by the Wantsum Channel. But no one knows how big the channel was 2,000 years ago; it could be that whatever disadvantages it presented were offset by the presence of a large and safe beach, where 800 ships could land and disembark 20,000 men and 2,000 horses in one day.

Despite the imposing size of Caesar’s fleet, it was long thought that his landing had little lasting impact on Britain. Caesar himself returned to France immediately after the two campaigns, without leaving a garrison. Yet the discovery of the landing site gives us cause to question this assumption. 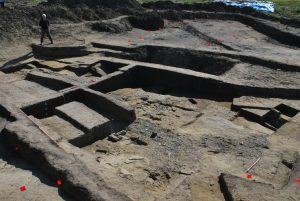 Historical sources, royal burials and ancient coins indicate that from about 20BC, the kings of southeast England had strong links to Rome. But historians have found it hard to explain how these alliances came into existence. The suggestion that they sprung from diplomatic ties forged by the emperor Augustus at that time has never been convincing.

But Caesar tells us that he reached a peace accord with the Britons in 54BC, even taking hostages from the ruling families to ensure the agreement was respected. Perhaps the alliances which came to light in the 20s BC were originally established by Caesar, a generation before emperor Augustus asserted his authority over the Roman Empire.

The close ties between Rome and the kings of southeast England assured emperor Claudius of a relatively easy military victory, when he first set out to conquer England in 43 AD. So it seems Caesar’s earlier conquest could have laid the foundations for the Roman occupation of Britain, which lasted more than 300 years.

For Caesar, the consequences of his invasions were clear. In his day, Britain lay beyond the known world. By crossing the ocean and conquering Britain, Caesar caused a sensation in his homeland. He was awarded the longest public thanksgiving in Rome, winning great acclaim and glory in the process. Mission accomplished.