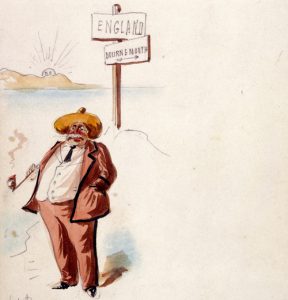 Dr Cornelius Herz escapes extradition on the ground that he has a terminal illness, and lives happily in Bournemouth for fifteen years. Watercolour drawing by H.S. Robert, c. 1897. Wellcome Library no. 532785i

In 1893 a middle-aged American physician lay ‘dying’ in a Bournemouth hotel. Cornelius Herz was wanted by the French authorities to answer charges in connection with the death of a business partner. A warrant for his arrest was even executed by Scotland Yard but medical opinion pronounced that Herz was too ill to be moved from his bed, let alone extradited to France. No lesser authorities than the famous French neurologist Jean Martin Charcot and British specialists, Sir Andrew Clark, Thomas Lauder Brunton and David Ferrier had spoken.

Herz had spent half a lifetime pulling the wool over the eyes of the public on two continents. In California he had fleeced his patients with quack electrical cures; a proposed telephone system for Paris had led nowhere; above all he was one of the more egregious beneficiaries of the fraud upon the public known as the Panama Canal Company. Only when another of the beneficiaries, Baron Jacques de Reinach, financial advisor to the company’s director Ferdinand de Lesseps, was found dead, did Herz’s charmed life begin to unravel. By blackmail or some other means Herz had it seems been extorting money from Reinach, whose death would be sure to expose his part in the Panama Canal scandal, if not something worse. Herz fled across the Channel before he could be detained. 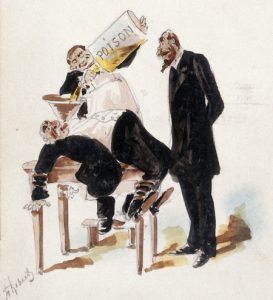 Baron de Reinach, one of the promoters in the Panama Canal affair, is forced to swallow poison. Watercolour drawing by H.S. Robert, ca. 1897. Wellcome Library no. 532775i

An extraordinary series of 11 contemporary watercolours acquired by the Wellcome Library in 2001 record one jaundiced French perspective on the affair. Reinach is depicted being forced to take poison; Herz flees the country in disguise; he relaxes in Bournemouth, alternatively fishing or gulling foolish English doctors with his imaginary complaints. Herz’s chief complaint was that he was suffering from diabetes, hence the title of the series: Un Diabétique. 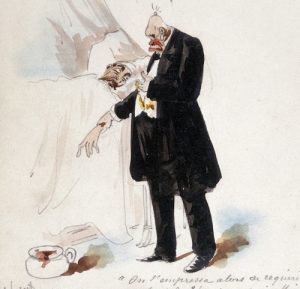 An English doctor takes Dr Herz’s pulse to see if he is seriously ill. Watercolour drawing by H. S. Robert, c.1897. Wellcome Library no. 532783i

One of those English doctors was Thomas Barlow, who with eminent neurologist Thomas Buzzard was commissioned by the Home Office to conduct a medical examination of Herz in April 1896 to determine whether he was fit enough to undergo a legal enquiry prior to a possible return to France. Barlow was no fool: his and Buzzard’s report, which is preserved among Barlow’s papers in the Library (PP/BAR/F/4), is a model of balanced scepticism:

“It is fair to state that Dr Herz bore our investigation of one and a quarter hour’s duration extremely well. We were told by those present that he was at his best and that at previous investigations he had acquitted himself with great success, but that he had suffered much afterwards. We may mention that ten minutes after the close of our examination one of us returning unexpectedly to the bedroom found Dr Herz quite calm and cheerful and apparently free from suffering.”

Barlow and Buzzard concluded that although Herz was undoubtedly diabetic and suffering from angina, they suspected that there was an emotional component to his prostration, and that provided suitable allowances were made the legal examination could proceed.

In the event Herz never returned to France but died in his bed in the Tankerville Hotel, Bournemouth, on 6 July 1898, not fifteen years, as the cartoonist predicted, but barely five and a half years after his flight. Whilst the consensus in France was that Herz was a crook and a malingerer, the British press did its best to bear out Abraham Lincoln’s dictum that you can fool some of the people all of the time.

The Pall Mall Gazette was a notable flyer of Herz’s flag: its reporter secured an exclusive interview with the invalid in July 1895, and gushed about a revolutionary telegraphic system that Herz promised to reveal to the world. 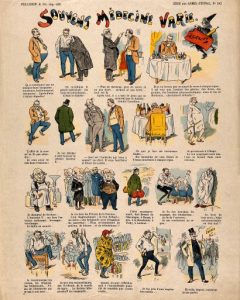 Meanwhile the Herz case became a byword in France for a certain type of medical fraud, a sort of conspiracy between patient and doctor to construct a fictitious illness. A satirical print of about 1900 comprises 19 scenes depicting popular disillusionment with doctors and medicine: one shows a physician advising a patient that his diabetes won’t kill him if he abstains from certain foods and eschews drink – “after all, many don’t die from diabetes, like Cornelius”. Indeed there was a great deal of dying in Dr Herz.

Reference: Frederick Brown, For the Soul of France. 2011, Anchor Books