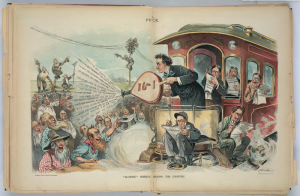 It started in the 1890s. Can their deployment offer us some kind of historical perspective on the current election? Certainly the cutting edge use of new media has been influential in presidential elections of the last 125 years. Understanding this can offer some engaging perspectives on campaign dynamics while distracting us from the more fraught conflicts of personality and policy, which have generated a deep sense of frustration among many of our colleagues. It was the complex use of media in the 2004 and 2008 presidential elections––and particularly Barack Obama’s successful use of the Internet as he defeated Hillary Clinton in the Democratic primaries and then John McCain in the general elections––that sent me back to the 1890s.

If the use of new media for presidential campaigning really began in the long 1890s, no one had examined it systematically. As I learned in researching and writing Politicking and Emergent Media: US Presidential Elections of the 1890s, John L. Wheeler originated the campaign documentary in 1888: his evening-length illustrated lecture, The Tariff Illustrated focused on the preeminent issue of that election––the tariff (sound familiar?) which was also closely tied to issues of jobs and immigration. His program, seen by almost 175,000 people in the key swing state of New York, was considered a crucial contributor to Republican Benjamin’s Harrison’s victory over sitting president Grover Cleveland. 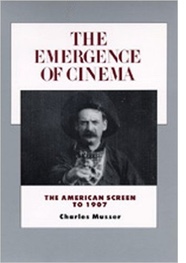 The Emergence of Cinema: The American Screen to 1907 (History of the American Cinema) / Charles Musser

Eight years later, Republican candidates and their associates invested in the American Mutoscope Company, which would soon become the foremost motion picture company in the world. The Republican National Committee sponsored the official premiere of its biograph projector in October 1896, showing McKinley at Home at Hammerstein’s Olympia Music Hall in New York City. Republican presidential candidate William McKinley was conducting a front porch campaign: apparently the only way to get him to leave his hometown of Canton, Ohio, was through the vehicle of projected motion pictures. The screen has been Republican from the outset, declared Terry Ramsaye in 1926. And with a reality TV star as the current Republican candidate––and movie star Ronald Reagan constantly evoked, Ramsaye was both historically accurate and all too prescient. Obama in this regard has been a remarkable exception.

So what are some of the historical antecedents that resonate with present day politicking? Consider “the newspaper of record.” The New York Times was strongly pro-Democratic in the 1890s. Nonetheless it railed against Democratic presidential candidate William Jennings Bryan and his 1896 Free Silver platform with the same ferocity that it now deploys against Donald Trump.

Comparisons are always apt: the issue-focused illustrated lectures on the tariff in 1888 and 1892 gave way to motion pictures that were issue free as Biograph’s filmmakers surrounded McKinley at Home with images of America’s natural grandeur (the American Falls at Niagara), culture (Joseph Jefferson in Rip van Winkle) and technology (the Empire State Express train). It appealed to viewers’ emotion rather than their intellect. Reflecting on a more recent shift in new media, we can see how Barack Obama’s YouTube channel was central to his 2008 campaign. That is where his “Yes We Can Speech,” following his defeat in the New Hampshire primary, was posted and viewed by millions of users. And YouTube was where will.i.am’s “Yes, We Can” music video was also posted––undoubtedly the most potent campaign song in the history of presidential politicking. Obama’s opponents were rank amateurs by comparison. Eight years later Hillary Clinton and Donald Trump may both have YouTube channels, but the action has moved to Twitter. Trump has used Twitter aggressively and in the first person. Clinton has used Twitter more cautiously, typically as a pro-Hillary news aggregator. When Cruz finally endorsed Trump (after the Donald had trashed his wife and father), the Republican candidate graciously expressed his appreciation. After Clinton was endorsed by the New York Times, the endorsement was simply posted to her Twitter page. Not only has Trump used Twitter to dominate any number of news cycles, he seems largely responsible for changing the way journalists now report the news. Since Trump’s run for the presidency, reporters rarely call relevant sources looking for a quote. They post pertinent tweets instead.

Campaign songs were often popular in the 1890s, but the level of interest fluctuated from election to election. The American Protective Tariff League, the largest political action committee in the 1890s, had sponsored Wheeler’s tariff lecture in 1888 and 1892: in 1896, it featured sheet music for campaign songs in the pages of its journal instead. These songs often had an upbeat even utopic cast to their lyrics. In this they anticipated the hundreds of campaign songs written on behalf of Obama in 2008. Perhaps somewhat surprisingly such songs continued to appear in 2012. Although songs related to the current campaign remain part of the politicking landscape, they are fewer in number and consistently satirize or mock one or even both of the candidates. The mood—on both sides—has completely changed. Enjoy “You’re A Mean One, Mr. Trump (Grinch Parody)” or “Liar Liar Pants On Fire Hillary Song.” Randy Rainbow, a blogger and Internet celebrity, offers numerous song parodies such as “The Nasty Woman” and “GRAB ‘EM BY THE P***Y! (Censored).

In a political universe with two such different candidates, it can be helpful to note their frequent symmetries. In September 1896, Abner McKinley, the candidate’s brother, supervised the taking of McKinley at Home, Canton, O. A mere two days later, William Jennings Bryan showed up on Edison’s doorstep for his cameo: Bryan Train Scene, Orange, NJ. Since Bryan was pioneering the whistle-stop tour, each candidate was shown in his representative campaign mode (the Bryan film does not appear to have survived). However, this apparent parallelism hides a dirty trick. Norman Raff was one of the partners who owned the Vitascope Company, which exhibited and distributed the Bryan film. Raff was not only from Canton, Ohio, he was a personal friend of McKinley. The Bryan film languished. Finally screened a week after the McKinley program (it could have been shown much earlier), Bryan Train Scene was embedded in a program of comedies that included Wash Day and Feeding the Chickens.

In the current election we might note that Gennifer Flowers opened a new Twitter account in May 2016, around the time that Trump seemed a certain winner of the Republican primaries. At the same time The Daily Mail online posted an updated profile of Flowers, which included her claims that Hillary was bi-sexual. Meanwhile that same month Alicia Muchado, a former Miss Universe who had been repeatedly criticized by Trump, became a US citizen. In June she came out as a Hillary supporter. When Trump taunted Clinton by threatening to bring Flowers to their first debate, Clinton brought up his treatment of Muchado during the debate—a provocation that worked very much in her favor. This time the Republican was outplayed.

With our current presidential campaign seemingly stuck in the gutter, it can be helpful to realize that nothing is entirely new. When Democrat Grover Cleveland battled Republican James Blaine for the presidency in 1884, Cleveland was faced with a sex scandal. Republicans would chant: “”Ma, Ma, Where’s my Pa?” When he won New York State by 1,000 votes, the Democrats had the final retort: “Gone to the White House, ha, ha, ha.” Cleveland was victorious because Blaine had his own problems with the 19th century version of email. Letters were found which indicated that he sold his influence while in Congress. One such letter concluded “Burn this letter.” So the Democrats chanted “Burn, Burn, Burn this letter”: Now Republicans mockingly sing ”Delete It” to the sound of Michael Jackson’s “Beat It.”

People sometimes wonder why the 2016 election isn’t a blow out–like McKinley’s laugher in 1896––instead of a race that now seems close and filled with uncertainty. Each candidate has weaknesses ––flaws that would be fatal under other circumstances. Trump as a candidate may be the William Jennings Bryan of the 1896 campaign but this election has finally begun to look more like 1884. You can wonder if Chelsea Clinton and Ivanka Trump will still be friends after this election, or you can read Politicking and Emergent Media and find out how politicking and the world of commercial amusements began to merge in the 1890s.