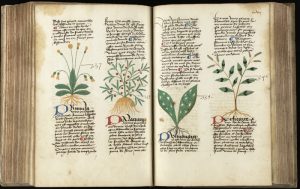 Pharmacy was one of the pillars of medical therapy during antiquity and the Middle Ages. Medicaments were derived from the natural world (plants, minerals and animals), and resulted from the combination of different substances, each with specific properties and therapeutic effects.

The need to convey knowledge and to inform physicians and apothecaries about the properties and therapeutic powers of natural drugs led to the development of an immense literature, in both the West and the East. Texts ranged from herbals (on plants) to bestiaries (on animals) and medical lapidaries (on minerals), as well as miscellanies including all three types of substance. Collections of medical recipes were also composed, often called ‘antidotaria’.

Much research has been devoted to reconstructing the development of pharmacological and pharmaceutical literature in Greek, Arabic and Latin, but much is still to be done, for we still do not have enough information about the texts that were produced and how they influenced each other. In other words, we still need to draw a complete picture of the history of pharmacology and pharmacy. This presents exciting possibilities for future discoveries, and the picture will no doubt be dynamic, intricate and fascinating.

The medical school of Salerno, which flourished between the 11th and early 13th centuries (see a previous post by Monica Green), played a significant role in these developments. Influenced by the translations of Arabic works provided by Constantine the African (d. c. 1087 in Montecassino), and probably drawing on a rich literature of Greek and Latin medical sources available in southern Italy, Salernitan authors produced widely disseminated texts, such as the ‘Antidotarium Nicolai’, a collection of medical recipes, and two collections describing nature and the therapeutical properties of natural elements, the ‘Glossae Platearii’ (‘Gloss of Platearius’) or ‘Liber iste’, and the ‘Liber de simplici medicina’ (‘Book on simple medicine’) or ‘Circa instans’. The ‘Liber iste’ and the ‘Circa instans’ (those titles are derived from the first words of the two texts) were both attributed to a certain ‘Platearius’, possibly a Salernitan physician.

Some years ago, I embarked on a major project focusing on the ‘Circa instans’, examining its origin, sources, manuscript diffusion and reception. Seeking out the numerous manuscripts preserving this text in several European libraries has allowed me to understand more not only about the text itself, but about its ‘life’ as a tool of knowledge, and the ways in which readers and scribes interacted with it.

The success of the ‘Circa instans’ resulted from its pragmatic, user-friendly structure, which made it especially useful to medical practitioners. The collection provides a selection of about 270 natural substances derived from plants, animals and minerals. Plants are the most consistently represented category, with everyday, readily available substances appearing more frequently than rare or exotic ones. The text is structured in alphabetical order, regardless of whether the substance is mineral, vegetal or animal in origin. This alphabetical organisation made it easier to search for a specific item within the text. 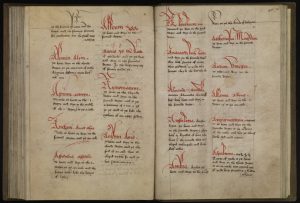 The user-friendly nature of the collection is enhanced by the consistent structure of the entries. Each entry only focuses on the therapeutic properties and powers of the parts of a product that could be used to heal diseases (such as the roots, leaves or juices), and omits its external aspects, knowledge of which was held as unnecessary for the physician and the apothecary. The compiler of the ‘Circa instans’ almost never refers to his sources, but fills the entries with what he considers reliable information, and structures it in a consistent, coherent way. He firstly recalls the cold or warm, humid or dry nature of the substance (what Galenic medicine defined as its ‘primary quality’), then describes its main effect (hydrating, drying, cleansing, purging), and finally notes its therapeutic application, generally from head to toe. By doing this, the compiler guides his readers from the general to the particular.

The ‘Circa instans’ was an extremely popular text. Preserved in about 240 surviving manuscripts, and translated into several vernacular languages (English, French, German, Italian, Dutch, Danish, Hebrew and Serbian), it was first printed in 1497 in Venice. It also became an authoritative source for several other herbals, pharmacological collections, and encyclopedias, at least until the 16th century.

Its success was not only measured by its diffusion in manuscript and print, but also by its adaptability. Because of its clear structure and its simple internal organisation, the work allowed its readers to cut, enlarge, integrate, adapt and update its content according to their own tastes, needs and cultural orientation. This led to a multiplicity of forms and versions of the text, often difficult to identify in manuscripts and catalogues, but giving us a taste of its vitality and usefulness to readers.

The importance of the ‘Circa instans’ is also shown by its presence in miscellaneous manuscripts comprising small anthologies of medical texts. The Wellcome manuscripts containing the ‘Circa instans’ fall into this category, such as MS. 547, an interesting anthology of texts related to medical practice. Thanks to new virtual tools, we are increasingly aware of the benefits of personalised reading selections, ready to be consulted and used at any time. The same principle was applied during the Middle Ages by readers and book owners wishing to put together their own portable libraries, especially professional readers, such as physicians or apothecaries.

The ‘Circa instans’ is often found in such anthologies, appearing alongside works describing illnesses and cures, collections of recipes, and even manuals of surgery. Within these anthologies, the ‘Circa instans’ provided essential information on the properties and effects of healing drugs. It had a supporting role, enabling practitioners to put into effect the treatments described in other texts within these miscellanies. 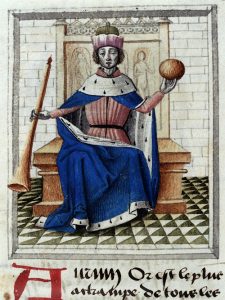 Finally, we should not forget that the ‘Circa instans’ was not only read and used for medical purposes. It also became the basis for a tradition of illustrated herbals conveying visual knowledge of the natural world, and often produced for reading pleasure rather than practical purposes. MS. 626, written in French during the 15th century and lavishly illustrated, typifies this association of knowledge and pleasure. The vitality and flexibility of the ‘Circa instans’ allowed it to serve both professional and non-specialist readerships with equal success.