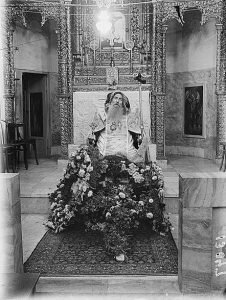 Body Syrian bishop’s during his funeral. The corpse is seated in church, between 1940 and 1946. / Eric and Edith Matson Photograph Collection via Wikipedia.

While doing some research on heart burials, the ritual internment of the heart separate from the rest of the corpse, I came across an account of the odd and days-long funeral of the prince-bishops of Würzburg in an article by Estrella Weisos-Krejci entitled, “Heart burial in medieval and early post-medieval Central Europe.”  The medieval funerary custom among the prince-bishops of Würzburg involved propping the corpse up in a sitting position so that he could be transported around the city of Würzburg then his heart, intestines, and corpse were buried in three different locations.

The preferred method of burial among medieval European nobility was whole body internment due to their belief in the physical resurrection of the body.  Some aristocrats, however, chose to have their hearts removed and corpses eviscerated, the removal of the organs in the abdominal cavity. These organs would then be buried in places that had sentimental or political value to the deceased.

According to Estrella Weisos-Krejci, evisceration and division of upper class corpses likely started for practical reasons.  For example, if a corpse needed to be preserved for a long journey home from a far off battlefield, the best way to postpone decay would be to remove the internal organs and dispose of them where the corpse was treated.

Krejci notes that English and French nobility started burying the heart and entrails for ritual reasons as early as the 12th century.  Medieval English nobility tended to only give the heart a special memorial.  The French upper-class of this period buried the heart, intestines, and corpse separately, called a tripartite burial.

Most German-speaking areas didn’t start to venerate a corpse’s internal organs until the late 16th or 17th centuries, but Krejci describes a mortuary tradition among the prince-bishops of Würzburg that involved the burial of the heart, intestines, and corpse in three different churches during a funeral that lasted two to three days.

The prince-bishop was a bishop in the Eastern Church who had spiritual and secular responsibilities to a diocese.  Once the prince-bishop of Würzburg was elected by fellow clergy they lived and died at Marienberg fortress next to the Main River in the city of Würzburg, located in northern Bavaria.

For this unique burial ritual, the heart was interred at Ebrach Abbey, the intestines were buried at St. Mary’s Church in the Marienberg Fortress of Würzburg, and the corpse was entombed in the Würzburg Cathedral. According to Krejci, they practiced this tripartite burial in the 15th century and possibly earlier, but Professor Dr. Armin Dietz states they buried their hearts and intestines separately as early as the 13th century.

Krejci found a description of the Würzburg prince-bishop’s peculiar funerary custom in a 15th century funeral report written by Melchior Zobel of Giebelstadt.

Immediately after they died, the heart and intestines were removed and preserved.  The entrails were placed in a container, preserved with lime, then interred in the castle church at Marienberg, also known as St. Mary’s.  The heart, present throughout the days-long funeral ceremony, was embalmed and put in glass vessel.

The body was also embalmed then placed in seated position, which was a common funerary tradition for priests in the Eastern Orthodox Church.  In order to keep the head and body upright, the corpse was impaled with a rod and a servant had the macabre task of holding the head up throughout the two to three day long ritual. 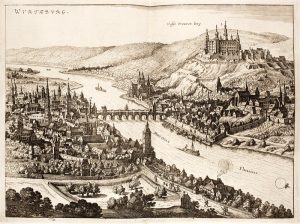 The first ceremony took place at St. James’ Abbey, also known as the monastery of the Scots and located between Marienberg castle and Würzburg city center.  The heart, seated corpse, and the servant holding up the head were carted on a bier from Marienberg castle to St. James’ Abbey where the body was displayed for one night.  The next day the seated corpse and heart were carted over the bridge to the Würzburg cathedral, for the second ceremony.  The corpse was displayed at the Würzburg cathedral on top of the baptismal font for one day.  Then the body and heart were taken to the monastery of Neumünster for a third ceremony.  The body was returned to the Würzburg cathedral where the corpse was interred after some city officials (usually judges) cast their *wands* into the grave. The heart was taken about 30 miles (50km) west to be interred at Ebrach Abbey.

Dietz, A. ‘Eternal Hearts—History of Heart Burial in Europe.’ Retrieved from: http://www.heartsymbol.com/english/index.html?heartburial_11.html