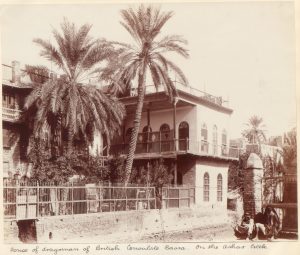 Wilfrid Malleson’s November, 1906, report and photos from an intelligence gathering tour in the Persian Gulf. 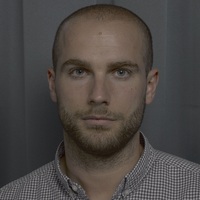 In November 1906, Wilfrid Malleson, a British military intelligence officer, departed from Simla in British India on an intelligence-gathering tour of the Persian Gulf and what British officials then termed ‘Turkish Arabia’ (the south of modern Iraq, then part of the Ottoman Empire). Britain was already the dominant imperial power in the Gulf and was keen to ascertain the situation in those territories to its north that remained under the sway of the Ottomans. Malleson’s report of his journey – that included stops in Muscat, Kuwait, Basra, Baghdad and Mohammerah – provides a fascinating snapshot of the region at this time. 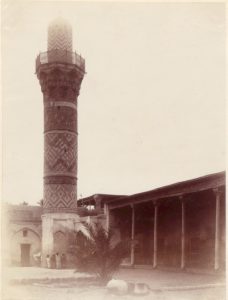 ‘Mosque and minaret of coloured tiles at Basra’. Malleson described it as: “a brick building with a minaret ornamented with some pretty blue tiles, but, on the whole, a squalid and sorry structure which in India one would hardly turn aside to look at” (IOR/L/PS/20/C260, f 25) / Public Domain

In addition to Malleson’s narrative, the report also contains a series of photographs of the places that he visited, foremost amongst them, Basra and Baghdad. Although Malleson apologised for their poor quality in the preface to his official report, over a hundred years later they provide an evocative glimpse of locations that have changed dramatically since and in some cases, came under British military occupation less than a decade after his visit. Indeed, Malleson made notes regarding the military defences (or lack thereof) of the places that he visited including Basra, of which he remarked, “[t]here are no defences and a landing could easily be covered from ships in the river”. Malleson also speculated that “judicious treatment [by Britain] could easily succeed in turning the local Arab against the much-hated Turk”. Eight years later – perhaps using intelligence supplied by Malleson – the British army invaded and conquered Basra as a part of the Mesopotamian Campaign of the First World War, events that eventually led to the establishment of the modern nation state of Iraq. In 2003, almost a hundred years after Malleson’s visit, the British Army invaded and occupied Basra again. 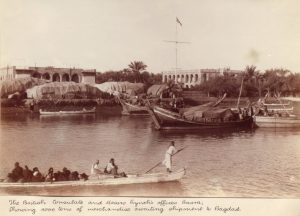 ‘The British Consulate and Messrs Lynch’s offices Basra; Showing 4,000 tons of merchandise awaiting shipment to Bagdad’. Malleson noted that Basra’s shops were “full of Manchester goods of a florid and ornate pattern suited to the local taste”. The workmen or “coolies” on Basra’s wharfs were said by Malleson to be “Arabs and Chaldeans” that “are of fine physique and can lift great weights. They work from sunrise to sunset, but refuse to work when it is wet and knock off when they feel inclined” (IOR/L/PS/20/C260, f 25) / Public Domain

In addition to military matters, the report discusses a wide range of other topics including trade, agriculture, history, transport infrastructure and religious communities, as well as the activities of rival powers, notably the German and Ottoman Empires. As Malleson noted apologetically in its preface, the report contains much “not of immediate military interest”. 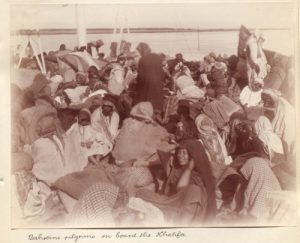 ‘Bahreini pilgrims on board the Khalifa’. Malleson took the Khalifa upriver to Baghdad and commented “[m]ore interesting than the country passed through were the pilgrims we took along with us. They were of every type, coming from all parts of the Muhammadan world in order to make the pilgrimage to the sacred cities of Kerbela and Nejef” (IOR/L/PS/20/C260, f 33) / Public Domain

Malleson also recorded the various characters that he met during the course of his journey including a German trader on the boat to Muscat and a pair of hospitable “Cosmopolitan Jews” in Basra’s quarantine station. The two men, father and son, were merchants and the latter was re-locating his business to Manchester in the north of England. Malleson commented that the dominance of Manchester in Baghdad’s trade “became apparent to us later”. He also encountered an explorer who was willing to share his findings with British intelligence and believed that “a strong British policy in the Gulf would mean progress and the spread of civilisation, and would, therefore, further the interests of the world in general”. 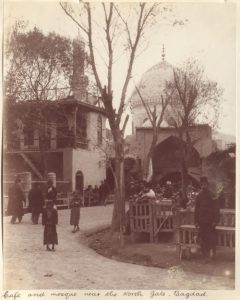 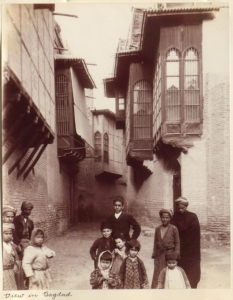 [LEFT]: ‘Cafe and mosque near the North Gate, Bagdad’. Malleson remarked that “[t]he cafes are largely frequented by the Turkish soldiery who, for the most part slouching and out-at-elbows, seem to have little enough to do” (IOR/L/PS/20/C260, f 38) / Public Domain
[RIGHT]: ‘View in Baghdad’. Malleson was struck by Baghdad’s diversity stating that “[i]n addition to a large population of Arabs…and representatives of most of the peoples of Asia there are some 35,000 Jews, and a great number of queer Christian sects, such as Armenians, Nestorians, and Neo-Nestorians, Chaldeans, Sabaeans, Arians, Jacbobites and Manichaeans. Most of them wear some distinguishing garments and the varied hues and shapes of these make a very striking effect” (IOR/L/PS/20/C260, f 35) / Public Domain

The report, though engagingly written, is replete with the lamentable orientalist and misogynistic attitudes that characterised the stance of many British imperial officials in this period. In perhaps the most unpleasant instance of racist language in the report – and as testament to the ongoing existence of slavery in the region during this period – when discussing the women that he saw in Baghdad, Malleson wrote that they “of course go veiled when abroad, even those of the numerous Christian sects and the Jewesses. The latter wear extraordinarily gorgeous silken garments, and the really smart thing is to possess a white donkey tended by the blackest and ugliest of negro slaves”. 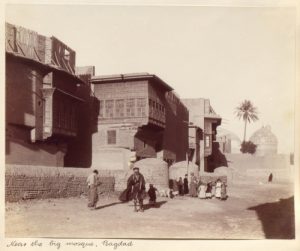 ‘Near the big mosque, Bagdad’ Medieval Baghdad, Malleson noted, had flourished while “the greater part of Europe had hardly emerged from the primitive barbarism it had sunk with the fall of the Roman Empire, or from which it had never emerged” (IOR/L/PS/20/C260, f 37) / Public Domain 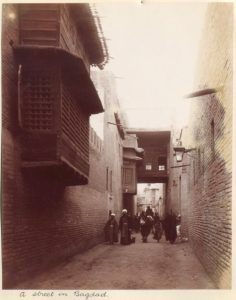 ‘A Street in Bagdad’. The reality of modern Baghdad was underwhelming however, Malleson believed “[t]he traveller who, attracted merely by the glamour of a name, expects to find in Bagdad the wondrous city of his dreams is doomed to disappointment”(IOR/L/PS/20/C260, f 38) / Public Domain

As well as visiting modern settlements while in Iraq, Malleson also visited historical ruins including the remains of ancient Babylon and Ctesiphon, the former capital of the Sassanian Empire. 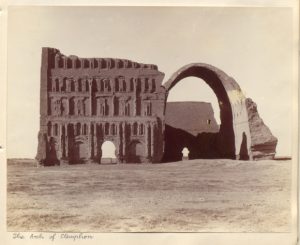 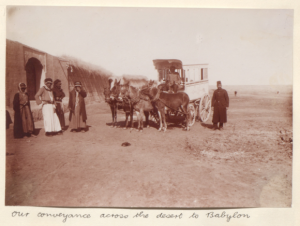 [LEFT]: ‘The arch of Ctesiphon’. Although Malleson reported that “[l]ocal experts are of opinion that this majestic ruin cannot much longer stand”, over a hundred years later, in spite of repeated invasions and wars, the arch still stands (IOR/L/PS/20/C260, f 48) / Public Domain
[RIGHT]: ‘Our conveyance across the desert to Babylon’. In Malleson’s words, “[i]t was a queer looking shandridan, half bathing-machine and half grocer’s cart, with very narrow and uncomfortable seats, and drawn by a team of four, and sometimes five, mules harnessed abreast and driven by a wild-looking son of the desert” (IOR/L/PS/20/C260, f 43) / Public Domain 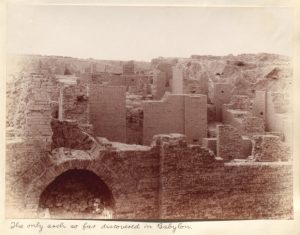 ‘The only arch so far discovered in Babylon’. Discussing his visit to Babylon, Malleson wrote “Here, too ‘midst the ashes of dead empires and the havoc wrought by man, the philosopher may muse on the mutability of mundane things, the fleeting character of fame, the mockery of riches and the vanity of power”(IOR/L/PS/20/C260, f 47) / Public Domain

Concluding his report, Malleson wrote: “[a]nd so, with a heightened interest in the problems of the Middle East, and with, perhaps, some increase of knowledge; with friendships made with useful people, and numerous promises of help and correspondence, we turn our backs on Turkish Arabia and shape a course for Bushire and Karachi”. Just eight years later, Britain would return to Basra as an invading force and when the its flag was raised over the town, the Daily Mail proudly proclaimed “Another Red Patch on the Map”.

For details on the connection between Manchester and Middle Eastern trade see: Fred Halliday, “The millet of Manchester: Arab merchants and cotton trade”, British Journal of Middle Eastern Studies   19:2 (1992), pp. 159-176.

An illustrated account of a tour of the same region in 1886-87: Turkish Arabia: Being an Account of an Official Tour in Babylonia, Assyria, and Mesopotamia, 1886-87 (India Office Records and Private Papers, Mss Eur F112/384).

A photographic album of a tour of the same region in 1916-18: Album of tour of the Persian Gulf. Photographer: Rev. Edwin Aubrey Storrs-Fox (India Office Records and Private Papers, Photo 496/6).

An official account of Britain’s Mesopotamian Campaign during the First World War: ‘HISTORY OF THE GREAT WAR BASED ON OFFICIAL DOCUMENTS. THE CAMPAIGN IN MESOPOTAMIA 1914-1918. VOLUME I’ (IOR/L/MIL/17/15/66/1).

For more on Britain’s invasion and occupation of Basra in the First World War see: Kristian Coates Ulrichsen, “1914: The Battle of Basra”, Hurst publishers Blog, 21 November 2014.