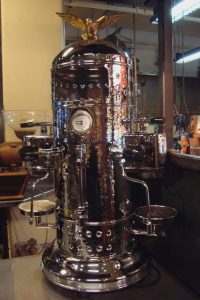 Espresso machines were commonplace in Italy before the Second World War but did not arrive in Wellington until the 1950s.

The first to appear were similar to the machines patented by Luigi Bezzara in 1901 and worked on the unsatisfactory principle of forcing boiling water and steam through the coffee and into the cup. They featured a tall cylinder boiling chamber which had to be of a substantial size to create the required pressure. Excess pressure could cause a blow out, or in extreme cases, a boiler explosion.

This machine was followed by a hand-operated (and later electronically powered) piston that created a far higher pressure while the water was held just below boiling point. Created in 1938 by the Italian company, Cremosi, it revolutionised the process of espresso making. It ensured that the superheated water would not burn the coffee and produce a bitter brew.

In 1946 Achille Gaggia marketed the first espresso machine to draw hot water from the bottom of the boiler, thus excluding steam. Many of the first wave coffee bar owners bought these machines. They operated with a lever, like an old fashioned beer pump, which was pulled down to draw water from the boiler, then released to activate a spring. The spring drove a piston downwards, forcing the water through the ground coffee at a pressure of about 60lb per square inch, ensuring that all the properties of the coffee were extracted.

These machines introduced Wellingtonians to espresso. But the machines were somewhat unreliable and the parts became almost impossible to obtain when the Labour Government’s ‘black budget’ of 1958 increased import restrictions. During this time simpler styles of coffee (such as Cona) took the place of espresso. One by one these huge coffee machines began to disappear, along with the coffee bars themselves.

A resurgence of cafes in Britain and Europe in the 1980s inspired a new generation of commercial espresso machines controlled by a microchip and the press of a button. This time round there was no problem with import restrictions although the machines did cost from $4000 to $15,000 each.