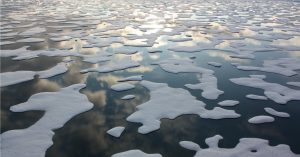 The ICESCAPE mission, or “Impacts of Climate on Ecosystems and Chemistry of the Arctic Pacific Environment,” is a NASA shipborne investigation to study how changing conditions in the Arctic affect the ocean’s chemistry and ecosystems. (Photo: NASA Goddard Space Flight Center/flickr/cc)

Funds for NASA and the National Oceanic and Atmospheric Administration (NOAA)—agencies that conduct critical climate change research, among other things—are on the chopping block as the Republican-led U.S. House and Senate hash out their 2017 spending bills.

U.S. Rep. Mike Honda (D-Calif.), a member of the committee, said the “drastic reduction in climatological research funding for NOAA” was among several “troubling funding cuts” to come out of the appropriations process.

On NASA, the American Association for the Advancement of Science reports, “Once again, House appropriators boosted Planetary Science at the expense of Earth Science.” The House bill allocates $1.7 billion for NASA’s Earth Sciences program—which researches the planet’s natural systems and processes, including climate change, severe weather, and glaciers—a 12 percent cut from 2016 funding levels.

Planetary Sciences, which focuses on exploring the solar system, got no such reductions.

The Senate Appropriations Committee passed its “comparatively less brutal spending bill in April,” maintaining funding at 2016 levels for both agencies, Climate Wire notes. The differences between the House and Senate versions will be resolved during conference negotiations.

The Earth Science Division is the loser here, which would receive a $231 million cut from 2016. But I wouldn’t panic about this—yet. We need to look at this in context of actions taken by the Senate last month.

In their budget, the Senate slashed $270 million from Planetary Science and used that money to increase Earth Science to a record $1.984 billion. I argued last month that this move could be understood as staking out an initial negotiating position before the House released their funding bill. You can read the House’s new budget proposal in the same way—it’s their counteroffer, increasing Planetary Science by roughly the same amount that the Senate cut it, and using Earth Science to support that.

Recent history has fortunately shown that both Earth Science and Planetary Science ultimately get increased budgets (as they should) in the final compromise spending bill, and we will strongly encourage this trend to continue.

Astronomer and journalist Phil Plait, writing at Slate at the time, argued that U.S. voters only have themselves to blame for such short-sighted policy decisions:

When you vote for people who publicly and loudly spout nonsense about science, and go against the overwhelming 97 percent consensus among climate scientists, what do you expect?

We sowed this Congress, and this is what we reap. Potentially huge cuts to critical science, care of the GOP. Remember that in November 2016.

Independent analyses from NASA and NOAA recently showed that Earth’s 2015 surface temperatures were the warmest since modern record-keeping began in 1880.