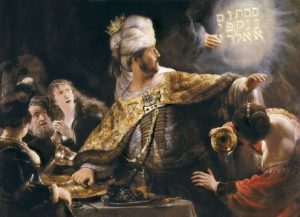 All accounted for in Babylon. Belshazzar’s Feast by Rembrandt. Everett – Art/Shutterstock

The number crunchers who helped create our capitalist world have been measuring theworld since ancient times. 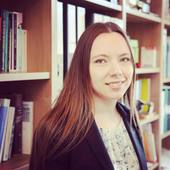 By Dr. Christina Neokleous / 07.21.2016
Lecturer in Accounting
University of Essex

In ancient Mesopotamia, Babylonia, Egypt, Rome and in Greece, the world saw the first flowering of an industry that would document and shape its progress. Wealthy landowners, emperors, princes and kings would keep track of their gold and grain using papyrus, stones or wooden tablets to keep records after purchases and sales.

This was how the art of accountancy was born. In Abydos, in the Egyptian tomb of King Scorpion, 5,300-year-old bone labels were found by the archaeologist Günter Dreyer inscribed with marks and attached to bags of oil and linen. By the time of Emperor Augustus, some 2,000 years ago, inscriptions had evolved to become an account to the Roman people of the emperor’s stewardship, listing and quantifying his public expenditure covering a period of about 40 years.

In the modern day, accounting has become a key social technology of a capitalist society, for better or worse. It has become a vast network. More than 485,000 people are members of professional accountancy bodies worldwide, collecting, analysing and communicating data for clients who might be parsimonious pensioners or spendthrift tech firms. 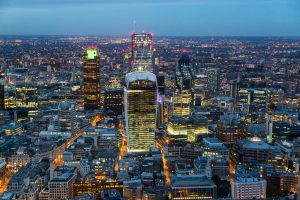 For many people in this post-financial crisis (and possibly pre-financial crisis) world, accountants and auditors are the occasional villains of the story, hunting down and exploiting loopholes for the wealthy and the profit-driven, or waving through bank balance sheets loaded with risk. So how did the accounting industry become such a crucial part of civilisation?

Accountancy grew in stature as taxes became more common. It was revolutionised with the emergence of a modern style of bookkeeping during the Italian Renaissance which offered more reliability and encouraged confidence. Luca Pacioli, an Italian mathematician and friar, offered a treatise on double-entry bookkeeping in 1494 which described the method used by Venetian merchants and made him famous as the father of accounting.

The next leap forward arrived as England started to build its economic strength in the 18th century as a centre of global trade, and in the 19th as the birthplace of the industrial revolution. Rapid economic growth brought transport and technical innovations and at the same time an accounting system was developed to address the aggregation of capital, methods of labour and production costs and income determination.

For cotton textile manufacturing firms, accounting focused on annual inventories of stock, debts and credits and a private ledger with partners’ interests. These accounts contained information about valuing a company to sell stock and to create a financial market.

In a familiar tale however, complexity brought creativity. There was a succession of corporate scandals among railway companies in the mid-1800s as funds were raised on false premises for the construction of railway lines. Subsequent insolvencies led to the need for company regulation while encouraging the rise of advanced cost accounting systems and greater control through auditing and winding up procedures. 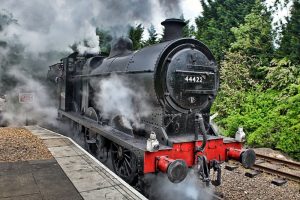 The rise of commercial companies was unchecked, though, and as they increased in number so bookkeeping became more refined. The industry gained a royal charter, which brought a new respectability – on the same footing as barristers – and presaged the creation of professional accountancy bodies and their expansion worldwide.

In Der Moderne Kapitalismus, Werner Sombart argued that double-entry bookkeeping actually enabled the birth of capitalism. It allowed assets to become quantitative values within a business while systematic accounting in the form of double-entry bookkeeping made it possible for capitalist entrepreneurs to plan, conduct and measure the impact of their activities. It also allowed for a separation of owners and the business itself, through the sale of shares, leading to growth.

Accounting has also been a powerful imperial tool, employed to control and protect investments around the world. This directly helped the process of accumulation of capital in favour of the capitalist interest in colonial societies. Being part of the British Empire meant that you were subject, not just to the monarch, but to British capital, to British accountants, to British laws and education – and to the absorption by colonial accountants of British accounting models that survived after independence.

Accountants remained in the former colonies to support and protect the continued corporate interests, the operations of multinational firms and the investment activities of supranational organisations like the IMF, World Bank and World Trade Organisation. Simply put, there is a straight line to be drawn from the accounting infrastructure which underpinned imperial expansion and the advance of global capitalism.

You see, the development of global capitalism gave accountants a fundamental role. Their techniques and practices had a significant impact upon the measurement and distribution of income, on the allocation of wealth, the operation of capital markets and the flow of capital investments.

You can see it in the role played by English and Scottish accounting practitioners in the development of the profession in the US. This led many UK audit and accounting firms to develop US connections from the 19th century. Growing trade between the UK and US saw PricewaterhouseCoopers (PwC) open an office in New York in 1890 and the trend continued to 1989 when Ernst & Whinney merged with Arthur Young to create Ernst & Young.

And so the world now had active Anglo-American firms, seeking to expand their activities beyond national borders and reflecting their desire to exploit and accumulate capital across the world.

The fabled Big Four accounting firms (EY, Deloitte, PwC, KPMG), established in the late 1980s, were oriented towards international clients and labour markets. They have played a significant role in shaping global accountancy practices and the nature of capitalism worldwide in the era of the multinational.

As a social and institutional practice, accounting is a set of practices that affects the social reality we inhabit. It defines our understanding of the choices open to businesses and individuals, and how we organise and administer the lives of others and ourselves.

The power that the industry has achieved since those Babylonian landowners made a note of their transactions has facilitated tax avoidance by Google, Amazon and Starbucks, and the balance sheet trickery which underpinned the 2008 financial crisis.

The power is money, pure and simple. Accounting firms are paid fees to help their clients, legally, avoid paying tax on their sales. Companies transfer wealth from society to capital with the help of an accounting industry that has been at the heart of capitalism since the very beginning. The architecture has deep foundations, and it allows corporations to sidestep the sources of revenue which might enable governments to improve the quality of life.