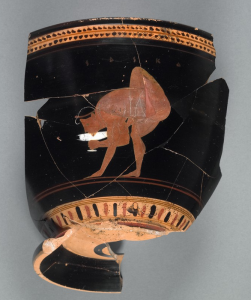 Fragmentary Mug with a Youth Drinking from a Wine Cup, 510–500 B.C., attributed to near the Theseus Painter, vase-painter; and to the Heron Class, potter. Greek, made in Athens. Terracotta, 6 1/4 in. high. The J. Paul Getty Museum, 76.AE.127. Gift of Lynda and Max Palevsky

What in the world is this man up to? Yoga? Leap frog? Twister?

After discovering the strange pose on this skyphos—an ancient Greek wine cup—our interest was piqued. We turned to David Saunders, curator at the Getty Villa, for the story.

Numerous scenes on Greek vases, he explained, show drinking cups being held in artful balance during the symposium (symposion), the ancient Greek wine party. Here, for example, is a youth acrobatically balancing a wine cup, and here is one clutching his drink while propped on one leg and a walking staff. 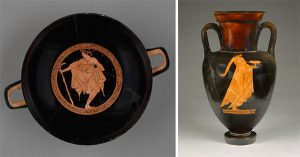 Our reveler takes the notion of drunken balance once step further, however. In the first publication on this fragment, art historian (and then-Getty curator) Janet Grossman puts it like this:

Recall that in The Odyssey acrobats amused the guests of Menelaos at the wedding feast held for his son and daughter. Acrobatics and balancing tricks were common entertainment, but, on vases it is usually drinking cups that are balanced, not the symposiast [symposium participant] himself.

Such high jinks probably found their way into the drinking activities as well. Pointing out the figure’s exposed nether regions, David drew a comparison to this cup at the British Museum, which is said to depict “the fistfights and disorderly conduct that result from passing beyond Dionysos’s recommended three kraters of wine,” especially when such excessive drinking “merges into an ensuing komos,” a kind of ritualistic wine-fueled Conga line.

Still, we can’t be sure exactly what this figure is up to. “I’ve long wondered whether this particular posture has a name,” David said, “or if he’s trying to imitate something.” However, we still don’t know. The inscription above the figure offers no help—it appears to be a Greek nonsense word. Drunken gibberish, perhaps? 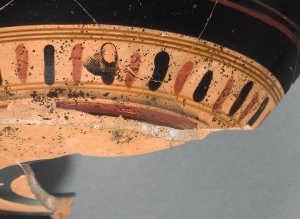 A smudged fingerprint provides tantalizing evidence of the ancient vase-painter. Fragmentary Mug with a Youth Drinking from a Wine Cup (detail), 510–500 B.C.

As for the painter of this now-fragmentary cup, evidence suggests he might have been having just as much fun as the limber symposiast. For one thing, he painted it in “Six’s Technique,” a style of multi-colored painting on black that represented the avant-garde of Athenian vase painting in the 500s B.C. “Did the artist share the acrobatic drinker’s ‘look what I can do’ exhibitionism?,” David wondered. A close look reveals that the painter also left a smudged fingerprint. Perhaps he’d also had a bit too much?

Whether they filled their skyphos a little too full or were just in the moment, this fascinating fragment reminds us that the ancient Greeks were not all democracy and intellect. They definitely knew how to throw—and paint—a party.