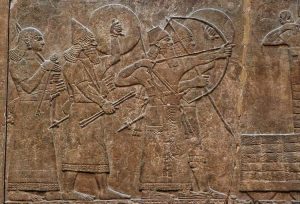 This Assyrian relief from the North-West Palace in Kalhu (c. 865-860 BCE) shows King Ashurnasirpal advancing on an enemy city, protected by a shield-bearer. Ahead is a wheeled siege engine, which carries more archers and contains a lever-operated battering ram (not visible in this photo). / Photo by Jan van der Crabben, British Museum

Nirari is best known as the king who conquered the Mitanni and established the Assyrian Empire as a national entity equal to the other great powers in the region. 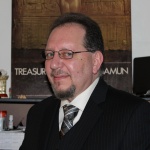 Adad Nirari I (reigned 1307-1275 BCE) was the king of the Assyrian Empire who initiated the first major expansion of the Assyrian kingdom from the city of Ashur throughout the region of Mesopotamia. He also instituted what would become standard Assyrian procedure: relocating large segments of the population in conquered regions. Adad Nirari I ruled during the period known to modern-day scholars as the Middle Empire and expanded the borders significantly. He is best known as the king who conquered the Mitanni and established the Assyrian Empire as a national entity equal to the other great powers in the region. 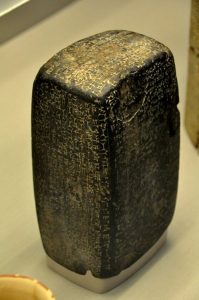 Rectangular stone foundation document of the Assyrian king Adad-Nirari I. It recounts the king’s victories over the Mitanni, who had failed to gain Hittitesupport, and the extension of Assyrian rule west to the Euphrates. The stone appears to have been intended for a palace that Adad-Nirari planned to be rebuilt in a Mitanni city, but if so, it never reached its destination. Length: 8.25 inches, width: 5.25 inches. Middle-Assyrian era, 1305-1274 BCE, Mesopotamia, Iraq. Excavated in ِAshur (Kalah Shergat) in 1922 CE. / Photo by Osama Shukir Muhammed Amin, British Museum

The kingdom of Mitanni had risen from the land of the Hurrians in eastern Anatolia and was powerful enough to suppress Assyrian hopes of autonomy. When the Hittite king Suppiluliuma I (1344-1322 BCE) broke Mitanni’s power, the Assyrians saw an opportunity to launch their own initiatives and tried to take it. They were blocked, however, by Suppiluliuma I’s tactic of placing Hittite rulers on the Mitanni throne and holding the region firmly under Hittite control. The Assyrian king Ashur-Uballit I (1353-1318 BCE) defeated the Hittites and expanded the Assyrian kingdom outward from their capital of the city of Ashur, but the next two kings did nothing to capitalize on these successes and the Hittites took back the land. Adad Nirari I succeeded his father, Arik-Den-Ili, who had maintained the Assyrian kingdom but had done nothing to expand or develop it. Adad Nirari I showed himself an ambitious ruler from the beginning of his reign by revitalizing the military and launching campaigns that would lay the foundation for the future grandeur of the Assyrian state. Assyria was not even considered a serious political entity by the other nations in the region before Adad Nirari I, since Ashur had for so long been subject to the rule of the super-power Mitanni and then subject to domination by the Hittites.

Adad Nirari I campaigned widely at the head of his army and wanted to make sure that future generations knew of his triumphs. He is the first Assyrian king about whom anything is known with certainty because of his habit of making inscriptions detailing his military victories and accomplishments. His memorial stele reads, in part:

Adad Nirari, illustrious prince, honored of the gods, lord, viceroy of the gods, city-founder, destroyer of the mighty hosts of Kassites, Kuti, Lulumi, Shubari, who destroys all foes north and south, who tramples down their lands from Lubdu and Rapiku to Eluhat, who conquers the whole Kashiaeri region (Luckenbill, 27).

In addition to the peoples and areas he mentions above, he completely conquered the region once held by the Mitanni and brought it securely under Assyrian control by abducting the king, forcing him to swear loyalty, and then releasing him to rule Mitanni as an Assyrian vassal state. He then initiated what would later become standard procedure for the Assyrian Empire: the deportation of large segments of the population. This was not only a punishment inflicted upon a conquered people but a means of adding to the growth and stability of the empire in that those who were re-located were assimilated into pre-existing communities which profited from their labor or area of expertise. If scribes were needed in a certain city then literate people were relocated there while if manual labor was required on building projects in another city, laborers were sent to that location. The relocation of the native population certainly also had the effect of decreasing the likelihood of an uprising, but it seems to have been primarily geared toward the overall improvement of the empire as a whole. Historian Karen Radner comments on this, writing,

The deportees, their labour and their abilities were extremely valuable to the Assyrian state, and their relocation was carefully planned and organised. We must not imagine treks of destitute fugitives who were easy prey for famine and disease: the deportees were meant to travel as comfortably and safely as possible in order to reach their destination in good physical shape. Whenever deportations are depicted in Assyrian imperial art, men, women and children are shown travelling in groups, often riding on vehicles or animals and never in bonds. There is no reason to doubt these depictions as Assyrian narrative art does not otherwise shy away from the graphic display of extreme violence (1).

Following his triumph over Mitanni, Adad Nirari I extended the boundaries of his kingdom south through Babylonia, defeating the Kassite king of Babylon, and demanding tribute from the regions which had been under his control. 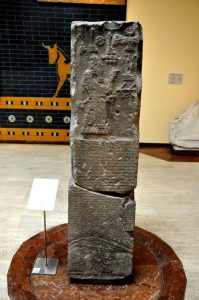 Having now conquered the regions that had once dominated Assyria, Adad Nirari I felt he was entitled to the same rights and privileges as the other kings of the region. The great kings of Egypt, of the Hittites, and those formerly of Mitanni, all addressed each other as ‘brother’ in correspondence and, accordingly, Adad Nirari I saw no reason why he should not now do the same. However, as the historian Trevor Bryce notes,

Mitanni had, of course, been under Hittite control and when Adad Nirari I conquered the region, he wanted to ensure peaceful relations with the Hittites to the north and west. He therefore wrote to the Hittite king Urhi-Teshub (also known as Mursilli III), addressing him as ‘brother’ and inviting himself to visit the Hittite king so that cordial relations between the two of them could now commence (though it has been suggested that Adad Nirari I was actually threatening Urhi-Teshub and the suggested ‘visit’ meant a military action). Urhi-Teshub responded, writing,

This insult did not seem to bother Adad Nirari I who continued to comport himself as a Great King worthy of the respect of his peers until it became apparent to the other rulers in the region that he was, in fact, one of them and deserved the same honors.

Urhi-Teshub was overthrown by Hattusili III who swiftly made every effort to respect the envoys of the Assyrian king and to write asking him for help in handling a problem with the town of Turira on the upper Euphrates (formerly a Mitanni village, now on the border between the lands of the Hittites and those of the Assyrians) which was harassing the people of the Hittite city of Carchemish. There seems to be no record indicating Adad Nirari I sent any aid to Carchemish and the rest of Hattusilli III’s letter may explain why. The Hittite king apologizes for the way his predecessor treated Adad Nirari I’s envoys and makes mention of their “sad experiences” at the Hittite court. Hattusilli III then rather petulantly complains that Adad Nirari I did not send him gifts at his coronation, which was expected from one great king to another. It could be that Adad Nirari I, now in a secure position of power, no longer felt compelled to seek friendly relations with the kings of the Hittites. He did not need them anymore.

When he had conquered Mitanni, Adad Nirari I took the king Shattuara I back to Ashur in chains, made him swear his allegiance to Assyria, and then released him to rule as an Assyrian vassal. When Shattuara I died, his son Wasashatta mounted a revolt and appealed to the Hittites for aid. The Hittites accepted Wasashatta’s gifts (which would have meant they would grant his request for assistance), but at the time were preoccupied with their relationship with Egypt and, presumably for this reason, never sent the support. It is entirely possible that, recognizing Adad Nirari I’s strength and tallying up his victories in the region, the Hittites simply thought it more prudent not to prompt an Assyrian action against them and to leave Wasashatta to his fate. Adad Nirari I marched his troops into the former Mitanni kingdom, defeated the forces of Wasashatta at the village of Irrite (later known as Ordi), and then continued through the region sacking and plundering the cities that had supported the rebellion. He brought the royal family back to Ashur as slaves.

Adad Nirari I ruled for 33 years and, in that time, not only campaigned widely with his army but initiated impressive building projects. After his destruction of the cities in the region of Mitanni, he ordered them re-built on a grander scale. He extended and enlarged the walls of his capital city of Ashur, had larger and longer canals dug, and improved irrigation methods in the region. Temples that had fallen in disrepair or had been damaged by military engagements were restored, and roads were built or improved upon (mainly in order to move his army more quickly through the regions he conquered). By relocating certain segments of the population, he was able to maximize the efficiency of communities in manufacturing necessary commodities, which increased their individual wealth and the wealth of the empire through trade.

After his death, his son Shalmaneser I (1274-1245 BCE) assumed the throne and continued his father’s policies. Shalmaneser I’s son, Tikulti Ninurta I (1244-1208 BCE), would expand on these policies and campaign with his army further than even Adad Nirari I had done. Adad Nirari I’s accomplishments provided these later kings with the resources to further expand the empire and, more importantly, to sustain it through the period which has come to be known as the Bronze Age Collapse (c. 1200 BCE). While other civilizations fell apart, the Assyrian Empire remained relatively intact and, with the rise of the great Tiglath Pileser I (1115-1076 BCE), would continue on to become the greatest empire of the ancient Near East.