Light from the universe’s first galaxies destroyed the hydrogen atoms that formed during the Big Bang. NASA, ESA, R. Ellis (Caltech), and the UDF 2012 Team

When our universe first blasted into existence with a Big Bang almost 14 billion years ago, it looked much different than it does today. Instead of planets, stars and galaxies, there was an inflating ball of hot plasma.

The universe cooled as it expanded, and over time the different ingredients of our universe froze out as temperatures plummeted. Quarks froze out first, then protons and neutrons, followed by electrons. Finally, after about 380,000 years, hydrogen – the first atoms – started to form. Some of these atoms were pulled together into stars, where they fused into carbon, oxygen, nitrogen, iron and all of the other elements from which planets and life are built.

However, when our universe was about one billion years old, it appears that nine out of every 10 of those original hydrogen atoms were destroyed before they ever found their way into galaxies. Exactly when and how were those first atoms in the universe destroyed? Astronomers have puzzled over these questions for decades. I’m leading a new experiment – known as the Hydrogen Epoch of Reionization Array (HERA) – that we hope will help answer what happened.

With the formation of those first hydrogen atoms – each made of one negatively charged electron and one positively charged proton – the universe entered a period cosmologists call the Dark Ages. During this time, the universe quietly waited for clouds of hydrogen to obey the influence of gravity and collapse into the very first stars and galaxies. The ignition of the first stars marks the end of the Dark Ages and the beginning of our “Cosmic Dawn,” some 100 million years after the Big Bang. For the first time, our universe began shining with a light other than the afterglow of the Big Bang. 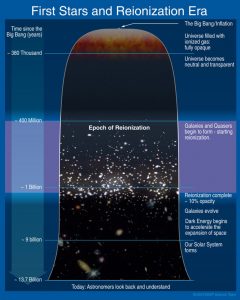 Timeline of the universe. NASA

Leading up to our Cosmic Dawn, the entire universe was filled with hydrogen. However, starlight consists of photons with enough energy to split hydrogen apart, reionizing it back into protons and electrons. As more and more stars lit up, larger and larger holes of ionization got carved out of the primordial hydrogen clouds.

Other, more exotic objects also began forming inside galaxies. As stars exhausted their hydrogen fuel, they’d explode in spectacular supernovae. Some stars left behind black holes that devoured nearby stars and generated powerful x-ray jets. In the centers of galaxies, supermassive black holes were growing, with the masses of millions of suns.

These events injected huge amounts of energy into the surrounding hydrogen clouds, heating and ionizing them, until, as we look out today, we see that all of the intergalactic hydrogen has been destroyed – reionized into its component particles, protons and electrons.

Mapping the hydrogen itself

We astronomers are still struggling to disentangle all of the complex processes that led to the formation of stars and galaxies and the simultaneous destruction of the universe’s hydrogen.

Using our most powerful optical telescopes, we are finding galaxies so far away that their light, emitted when the universe was only one billion years old, is just now getting to us. The glimpse we get of these galaxies in the final throes of reionization is as the last remnants of intergalactic hydrogen are being burned away. Yet as we try to look deeper, the hydrogen itself confounds us. It absorbs the very starlight that we use to observe distant galaxies, acting as a blanketing fog that conceals the chaos behind it. 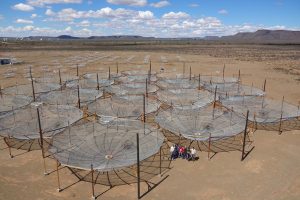 The start of construction on the HERA array. SKA South Africa

To solve this problem, my colleagues and I designed a new kind of telescope: an array of radio dishes that, instead of searching for distant galaxies, maps the intergalactic hydrogen itself throughout the process of being heated and reionized. Our Hydrogen Epoch of Reionization Array combines cutting-edge supercomputing hardware with low-cost antenna construction in a unique design that gives it both the sensitivity and precision to create what will be the largest maps in the universe.

HERA is sensitive to a specific kind of radio wave produced when the magnetic fields of the proton and electron inside of hydrogen switch their north-south polarity with respect to each other. Just as two oppositely aligned bar magnets attract each other and release energy in the process, the switching polarity of the electron and proton causes hydrogen to release a small amount of energy. This hyperfine transition produces radio waves with a characteristic wavelength of 21 centimeters.

Computer simulations predict how clouds of hydrogen glowed with 21-cm emission as they were heated and ionized by early galaxies.

By mapping the sky at many wavelengths between 150 and 350 cm, HERA can produce a series of images from the early childhood of our universe. We will be able to watch step by step as the light of the first stars and galaxies destroys the clouds out of which they formed. We expect to see large clouds of hydrogen glowing with 21-cm emission, with dark pinpricks of ionization sprinkled in. As we move to parts of the universe that are closer to us and where more time has elapsed, we should see larger and larger voids where 21-cm emission is missing, until finally, these voids swallow everything and the 21-cm signal that signifies the presence of hydrogen is gone.

Building our new kind of array

Our HERA team was recently awarded US$9.5 million from the National Science Foundation. We’ll use the funds to construct a hexagonal array of 240 14-meter radio dishes in Karoo Radio Reserve of South Africa over the next three years. Our collaborators hail from 16 institutions from around the world. The plan is to work in parallel to conduct the observations that will be used to produce HERA’s groundbreaking results.

Observations with the new facilities in the next several years are poised to transform our understanding of the first stars, galaxies and black holes, and their role in driving reionization at the end of cosmic dawn. HERA’s observations of neutral hydrogen will provide unique insights into this formative period in our universe. Indeed, in the early universe, 21-cm emission provides the only direct way to probe the complex interplay between the first luminous structures and their surroundings. To trace the story of the first atoms in the universe, stay tuned as HERA begins observing over the next few years.