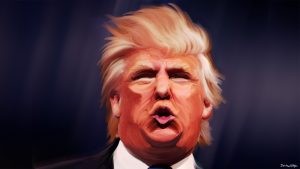 GOP Sens. John McCain, John Thune, Kelly Ayotte, Mike Lee, Mark Kirk and Mike Crapo, two Republican governors and a dozen or more GOP members of the House either said they won’t support Trump or called on Trump to quit, while many others, including Trump running mate Mike Pence, expressed their disgust.

What was on the 2005 video tape, first reported by The Washington Post’s indefatigable David A. Fahrenthold, was beyond what we’ve known before of Trump — that he grabs the genitals of women without their consent and tried mightily to seduce a married woman. But it’s worse only by degrees. If this is the straw that broke the camel’s back, this dromedary was already overburdened and suffering from arthritis, spinal stenosis and ruptured disks.

Republicans may be dismayed by the super-predator they saw and heard in the video, but they have no business being surprised. What’s on that tape is entirely consistent with what we already knew.

Even before this tape emerged, we knew that his wife Ivana accused him at the time of their divorce of raping her (Trump’s lawyer asserted that there is no such thing as spousal rape). We’ve seen complaint after complaint about his lewd behavior on set at “The Apprentice” and at his Miss Universe pageants.

But while people can question the he-said, she-said allegations against Trump, it’s harder to dispute the meaning of his own words.

Here, for the benefit of those Republicans feigning surprise about Trump’s video, is a partial catalogue of reported remarks Trump has made about women — remarks which, by embracing Trump as the GOP presidential nominee, office holders in the party have already condoned:

“You know, it doesn’t really matter what they [the media] write as long as you’ve got a young and beautiful piece of ass.”

“If Ivanka weren’t my daughter, perhaps I’d be dating her.”

Avoiding STDs “is my personal Vietnam. I feel like a great and very brave soldier. … This is better than Vietnam. It’s more fun.”

“If I told the real stories of my experiences with women, often seemingly very happily married and important women, this book would be a guaranteed best-seller (which it will be anyway!).”

“Does she [Kim Kardashian] have a good body? No. Does she have a fat ass? Absolutely.
”
“Can you imagine the parents of Kelli [Rosie O’Donnell’s partner] when she said, ‘Mom, Dad, I just fell in love with a big, fat pig named Rosie’?”

To a lawyer who needed to take a break during a deposition to pump breast milk for her infant daughter: “You’re disgusting.”

To “Celebrity Apprentice” contestant Brande Roderick: “It must be a pretty picture. You dropping to your knees.”

To Cher: “I promise not to talk about your massive plastic surgeries that didn’t work.”

“I fully understand why [Arianna Huffington’s] former husband left her for a man — he made a good decision.”

A retweeted message: “If Hillary Clinton can’t satisfy her husband what makes her think she can satisfy America?”

Of Carly Fiorina: “Look at that face. Would anyone vote for that? … Can you imagine that, the face of our next president?”
For women who have abortions: “There has to be some form of punishment.”

“Without the woman’s card, Hillary would not even be a viable person to even run for a city council position.”
“A person who is very flat-chested is very hard to be a 10.”

On the Miss America competition: “There’s only one talent you care about, and that’s the look talent.”

“I would never buy Ivana any decent jewels or pictures. Why give her negotiable assets?”

“Anyone who knows me knows these words don’t reflect who I am,” Trump said Friday night in his non-apology apology for the video.

But that’s just the problem: If you don’t think the words in that video reflect exactly who Donald Trump is, you haven’t been paying attention.