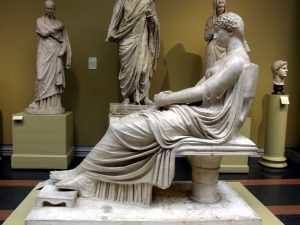 Agrippina Minor plaster cast in Pushkin Museum. The original was found in the surroundings of Rome, is part of the Farnese Collection, and is now in the National Archeological Museum, Neaples.

Agrippina the Younger was the first empress of the Roman Empire, but almost no modern sources remember her as such. In fact, she is not often remembered at all. Unlike her predecessor, Augustus’s wife Livia, she has slipped out of history. Where she has left a mark it has been only as Claudius’s last wife and the mother of Nero. But Agrippina was so much more than simply the consort and mother of men. She was a powerful, public woman in her own right, as is abundantly clear in the ancient sources that record her life, who express boundless horror at her refusal to stay in her appropriate feminine place. Agrippina the Younger’s life is characterised by her arrogant refusal to adhere to these accepted standards of femininity and to take for herself the overt power that she thought she deserved. 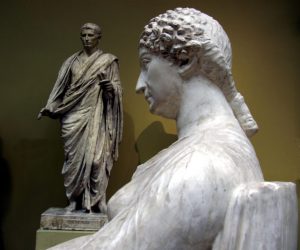 The Romans were always very clear about the correct place of women. In Roman law, women were treated as minors and given male guardians to look after them. Women were forbidden from the places and positions of power and had no access to public life officially. However, Agrippina refused to comply with these standards.

Agrippina had an eventful life. She was the great-granddaughter of Augustus through her mother and her father was adopted by Tiberius. It was her brother, Gaius, otherwise known as Caligula, who succeeded Tiberius in the end — everyone else died young — and Agrippina and her two sisters found themselves highly honoured during the early years of his reign. Their honors did not seem to be enough, however, and Agrippina, her sister and their husbands were exiled for plotting against Caligula two years into his reign. Agrippina was sent off to a tiny island in the Tyrrhenian Sea, stripped of her rights, property and access to her son, to languish for the rest of her life — until Caligula was assassinated two years later and her uncle Claudius took the throne, pardoned the previous plotters, and restored them to Rome.

At this point, many would probably have thanked their luck and lived a quiet and luxurious life as the emperor’s niece, but Agrippina never wanted a quiet life and believed entirely in her right to rule and her son’s right to succeed Claudius. By this time, they were the only two people left alive of Augustus’s bloodline and Agrippina therefore saw the imperial throne as her birthright. So she set her sights on Claudius. It took a few years and another marriage before Agrippina was in a position to make her move, but when Claudius’s wife Messalina was executed for treason, Agrippina used her position as his niece to sit on his lap and offer her shoulder to cry on. It wasn’t long at all before Claudius was changing the laws of incest so he could legally marry his brother’s daughter.

It is her behaviour as Claudius’s wife that makes Agrippina quite so extraordinary. Unlike Livia, Agrippina did not use private, feminine influence over her husband to get things done, she acted on her own and sat with him in public as an equal partner in ruling. She even founded a town at the place of her birth in Germany and named it after herself: Colonia Claudia Ara Agrippinensium. Today we know it as the city of Cologne. She horrified the male Roman elite with the brazenness of her rule and she ignored them unless she could make use of them.

Agrippina was also incredibly smart, so she didn’t entirely forget how effective womanly influence could be too. Within her marriage, she persuaded her husband to adopt her son from her first marriage, he took the name Nero at this time, and then convinced Claudius to make Nero his primary heir over his younger, biological, son Britannicus. Not too long after the adoption, Claudius died amid strong rumours that Agrippina had poisoned him.

Certainly, Claudius’s death was nothing but benefit to Agrippina. As the emperor’s wife, she had acted as his partner but was always the junior partner. Nero was just 17 when he ascended to the throne and so she was effectively his regent, placing her as the senior partner. That Agrippina was Nero’s equal in power for many years is evident in the iconography on their coins and friezes. Both their faces are depicted on coinage, and in several they are facing one another, their heads of equal size and equal importance. In a remarkable sculpture, Agrippina is depicted as the personification of fertile Rome, crowning her young son. 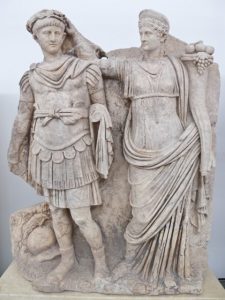 Agrippina’s power over the empire through her son lasted several years, and they are the best years of Nero’s reign. But such an arrangement could not last forever. As Nero grew up and came to understand his position as emperor, Agrippina also came to understand fully how limited she was as a woman in the Roman world. In the end, her power was only effective when it was supported by men. When her son withdrew his support, rebelling against his mother, the senate and people of Rome soon followed. Agrippina was forced, very much against her will, into a quiet retirement.

Quiet retirement did not suit Agrippina and she never accepted it. She agitated against Nero constantly, setting up factions of senators still loyal to her and trying to use Britannicus as a threat against him. Eventually, Nero decided to kill her, because as emperor he could. Suetonius claims that Nero attempted a number of entertainly elaborate schemes to have her killed, including a collapsing roof in her bedroom and a collapsing boat that would toss her into the sea and drown her. Unfortunately for Nero, Agrippina was both canny and an excellent swimmer so he was forced to resort to low measures: sending a soldier to stab her.

Agrippina was murdered outside of Rome, cremated and buried in an unmarked grave with no ceremony. She never received a funeral or any state honours and Nero did his best to pretend that she had never existed during the remaining years of his reign.

The ignominy of her slow fall from power and the silence surrounding her death meant that it was easy to sweep her out of history. The men who wrote this histories of Rome were happy to pretend that a woman had never ruled them. But for almost ten years, Agrippina unofficially ruled the Roman empire as partner to her husband and son. She was hailed as Augusta and was empress in all but name. She fought against and transgressed the limits of her sex more than any other woman of the Roman imperial world. Her fascinating example deserves to be remembered as more than simply the mother of Nero.