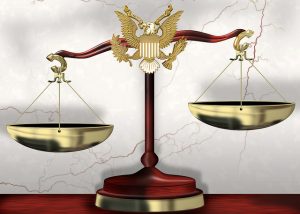 I built this huge, expensive, beautiful house using the best materials and workmanship money can buy.

The buyer, a Muslim — I love Muslims, I think they are great people — has filed a stupid lawsuit alleging that the house I built is a piece of crap. Can you imagine that?

Now, I could settle this case in a jiffy but I never settle lawsuits. To do so would just invite other nutcases – Muslims, Mexicans, blacks, women — to litigate the sh*t out of me. But, on the other hand, let me tell you why this case should never go to trial.

I happened to see the list of judges who potentially could hear my case — and it is a beaut.

Let me go down the list and tell you why each and every one of these judges must be disqualified from hearing my case.

Take Judge Chandra. I love him and he loves me. Perfectly nice guy, I like Indian food and I’m a big fan of India — some of them are fine people. However, I am planning to build a Chinese restaurant that is going to compete with Chandra’s friend’s Indian restaurant just down the road. How can this guy be fair to me, it’s an inherent conflict of interest — give me a break.

Then here is judge Williams. Also a very, very nice guy, very proud of his heritage — some of my best friends are black and I’ve always had a great relationship with the blacks — but how can I expect my African-American to treat a lily-white defendant fairly. No way!

Or how about Judge Gonzales. Now I have nothing against Mexicans, some, I assume, are good people…I even hired one or two of them to do some stonework at the house — they did a beautiful job! But this judge made a huge donation to my Mexican — just look at his name — opponent in the city council race. Talk about a huge conflict of interest.

Talking about foreigners, there is Judge Chen. Born here, but still a Chinese to me. By the way I have nothing against China or the Chinese, I have many, many friends there, but I never use Chinese materials or labor in my construction. We’re losing now over $500 trillion in trade with China — it’s disgusting — and I am doing my bit to correct that by buying all-American for my houses. The judge knows that. He’ll treat me fairly? Are you kidding me?

Then there is Judge Jones, with a similar ethnic and racial background as myself — perhaps not as pure — but he has made rulings that people can’t even believe, given his race, including a ruling against me for refusing to rent to a Latino, and I have nothing against Latinos, not a racist bone in my body. How can this guy be fair to me?

Now, everyone knows I just treasure women and women love me. I even once had a female designing one of my kitchens. But, to have a woman hear a case where the builder and all his employees are male? How fair will that be!

Finally, there is Judge Bernstein. What a great guy. I even played golf with him once. But can you imagine him being fair to me when he finds out that I made my workers, including Jews, toil on the Sabbath? Or, worse, when he starts pondering about my German heritage.

You want to know the truth. But I won’t say that, because I don’t want to get myself in trouble, I don’t want to have any controversies. So I refuse to say that there is not a single judge in this country unbiased and qualified enough to hear my case. Even former Attorney General Alberto Gonzales — a man of stellar reputation — agrees with me that I have a right to question the fairness of these judges.

That is why we need to elect someone like Donald Trump to straighten the Judicial Branch out and to install judges — especially on the Supreme Court — who will not discriminate against people with the right heritage, the heritage that will make America great again.

If Trump had been our president already and had enforced his “No Muslims” rule, I would not be in such a pickle.